Magic Piano by Smule is a free piano app for Android that lets you play free songs on Piano in this app. This piano game app has two modes. First is learning mode in which you play with the help of the app. It has 3 difficulty levels. You can select from hundreds of songs and get stars, points, XP for each performance. 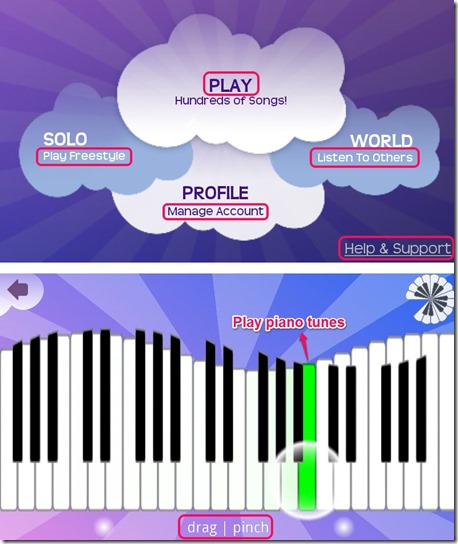 Key Features of this Free Piano App for Android: 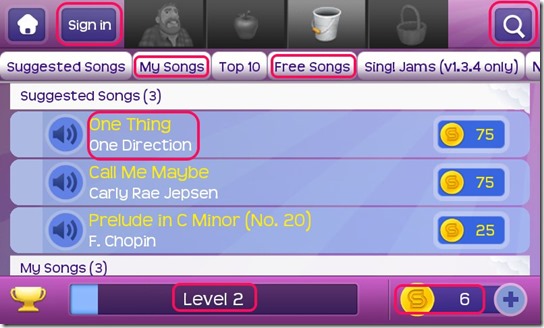 If you are a Windows 8 user then try this Windows 8 Piano App, that has been reviewed earlier on this website.

You can download free piano app for Android using the Google Play Store link or QR code given at the end of the review.

On the main page of the app you will see four options. These are: Play, Solo, Profile, World.

PLAY: By selecting this option you can play hundreds of songs with the help of the app. You will only have to tap the notes as they appear on the screen. This will make the melody of the song you are playing. With a little practice, you will be able to play your favorite songs perfectly. You can play free songs or select songs using categories like Pop, Classical, Rock, or Musicals. 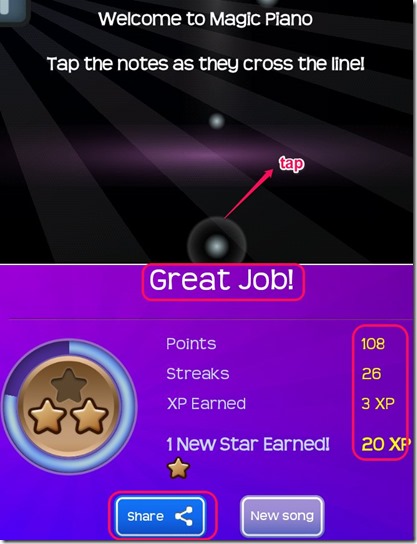 There are three different difficulty level modes namely, Easy, Medium, and Difficult. At the end of each performance you will be rated using stars. You should aim on getting three stars. You will also be given points and XP after each play.

SOLO: Here you have four kinds of piano that you can play. You can play the normal rectangular piano by dragging your finger on the keys to create musical sounds or by pinching piano keys one by one to create your own music.

Other than the rectangle piano, you have other interesting and fun piano types. You can switch to another type by simply tapping the round piano icon displayed on the screen. You can select the spiral piano or the round one. These two are played in the same manner. 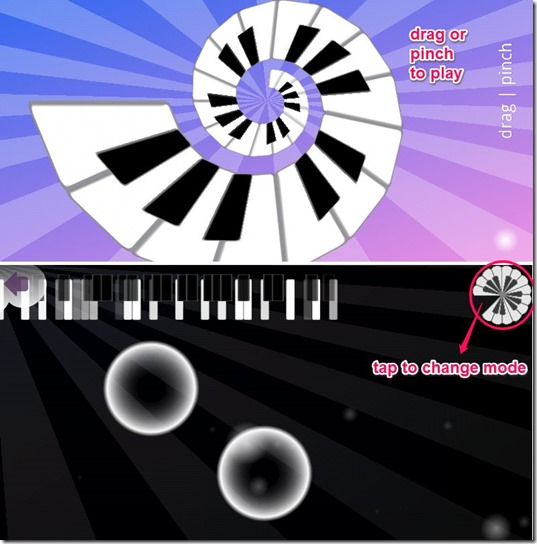 You can also play music by selecting the invisible piano (see screenshot above). You can tap anywhere on the screen to play notes and create nice music.

Profile: You can create your profile in the app. You can sign in using Facebook or Google Plus. Once you are signed in, you can easily manage your profile and share performances with your friends.

World: This is the in built Smule globe, where you can listen to the performances of other Smule users. This is a good way to know what others are playing and how much better your performances are.

If you would like to learn and play other instruments like Guitar or Drums, then try Android Music App on your Android phone.

Magic Piano by Smule is a very fun and addictive piano app for Android. This app can be used anytime to cheer yourself up. The music created by it is so real and soothing that its like playing a game and meditating at the same time.

Get Magic Piano by Smule here or use the QR Code given below.