Zulu Star, is a free Windows 8 match 3 game app. The game is more about how fast you can think and react, then a puzzle game. In this match 3 game app, you’ll be shooting at different colored bubbles, all coming out in a series from a hole at one of the corners, and going towards the other hole at the other end of the screen. They all follow a track, which is already laid out between the two holes. So, before even a single bubble manages to reach to the other hole, you have to shoot at them and make them disappear. But you have to be careful because you can’t just randomly shoot at them you have to form a series of at least 3 matching colored bubbles. You’ll get a cannon for shooting at these series of bubbles. If a single bubble manages to reach the other hole; the game  ends, and you’ll lose. 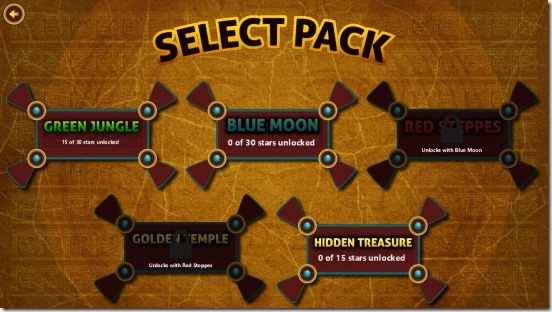 There a total of 45 different levels to complete, all divided into 5 main groups. Play this fun and challenging game, and test your thinking and reacting abilities.

This Windows 8 match 3 game app, sure is challenging and it does tests how fast you can think and react. You don’t just have to keep an eye on the bubbles, coming out of one of the holes, but you also have to pay attention to the bubbles that gets loaded in the cannon. You can’t just choose the bubbles that gets loaded, in fact the game itself loads bubbles in the cannon, and you have got no choice but fire. Like I said above the main object of the game is to make all the bubbles burst and clear the track, before they reach the other hole. The speed of the bubbles is pretty fast, you get very less time to think and react. In order to make the bubbles burst, you have to make a series of at least 3 similar colored bubbles. But as the cannon gets loaded with different colored bubbles and it’s all random, so usually you end up with bubbles in series that don’t exact match. The bubbles don’t stop at this very point, and they try to make it extremely hard for you to win the level. They just keep on coming and constantly moving towards the other hole. 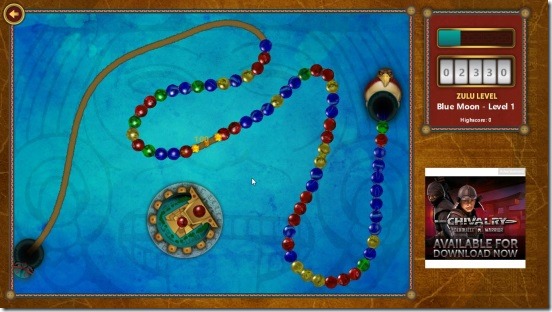 However, there’s a catch at this point. To help you, this Windows 8 match 3 game app, gives different types of powers during the game play. Some blast out a specific number of bubbles, even if they have different colors, another power automatically matches bubble you fire with the bubbles they touch, making it easy for you to form a series of 3 matching bubbles. And also if you managed to blast off the series of matching colored balls somewhere in between the series of random ball in the track, then the balls which are at the front, stop giving you enough time to blast them off. This is all about the game play of this Windows 8 match 3 game app. 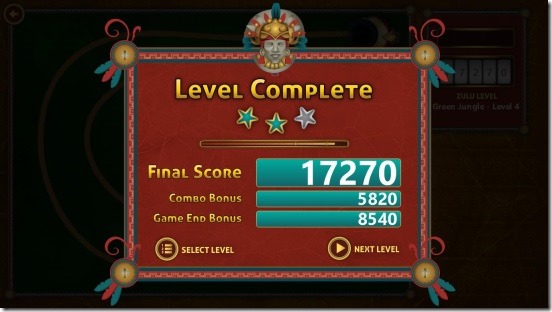 The game has a total of 45 levels to complete, grouped under 5 stages. It’s compulsory to complete current level to advance to next. The gameplay at initial levels is easy, but as you advance, gameplay becomes difficult. Controls are pretty easy. All you have to do is direct the cannon face using mouse, it automatically follows your mouse movements and fire using click.