This app has been well integrated with the Windows 8 features and style of the interface. The app has different pages for home, connections, discover, and profile that can be accessed by clicking on the buttons that are located on the extreme left part of the interface.

One thing that I liked is that the compose a tweet and search button is always available on the top right corner of the Window no matter where ever your are on the app. Clicking on the compose button will open up the side panel as shown below that will enable you to tweet while the search button allows you to search for users, hashtags etc. 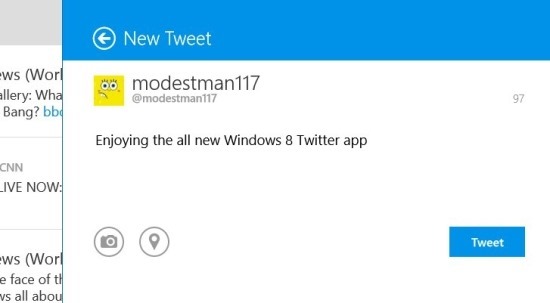 The home screen on the app shows you all your news feeds as seen in the first screenshot of the post. Clicking on the news item will bring up other options as shown below in screenshot. These options include the ability to follow, favorite, re-tweet, reply, and other information. But I would have preferred that these controls were not always shown on the news feed items in the first part. 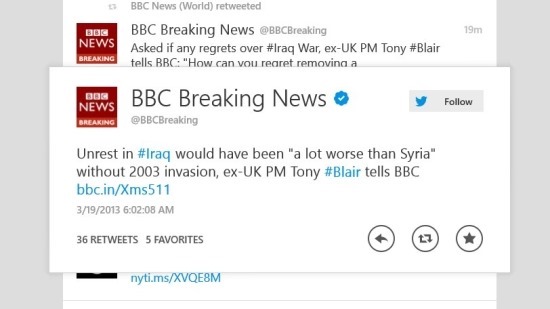 While the discover shows content and information as shown below in the screenshot below. The trends, activities, and tweets are shown in the typical horizontally scrollable interface as seen below.

The other important window of this app is the me window which shows all the information related to your Twitter account as shown below. The interface of this section of the app is simple and shows you information like tweets, follower, following etc. as seen below.

In total this is good start and hopefully the future iteration of this app will be even more pleasing. For now it is simply the best Twitter app for Windows 8, if you like simple and functional apps then you will love this Twitter client for Windows 8. One of the highlighting feature about this app is that it works amazingly well in the snapped mode in Windows 8. So start twitting with the official version of the Twitter app for Windows 8 by downloading it from the below link.