TunnelVision is a completely free, easily available app that can hide screen of your system and increase your privacy. The primary feature of this software is that, once you activate it, it will only show parts of your screen where the cursor moves. A viewport reflects only that part of your screen where the cursor is. Rest of the screen gets hidden by a background image or color. It also allows you to make certain configurations like selecting a background color, background image. You can also alter the diameter of the viewport and change its shape.

This hide screen app allows you to protect your private content from others. If you want to hide certain parts of your screen while showing something to others, then this hide screen app can prove to be effective. It is also a very lightweight app so you do not have to worry much about the space it will occupy. 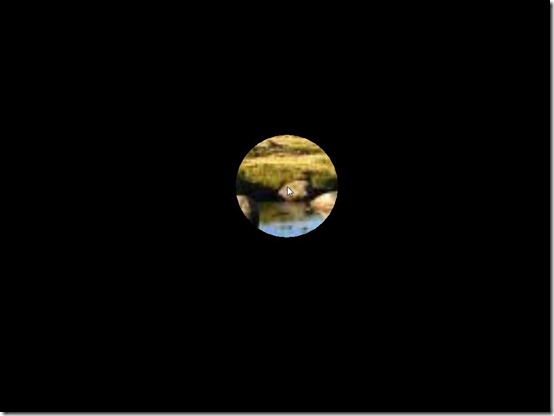 Hide Sections of Screen With TunnelVision:

Once you launch the app, it operates from the taskbar of your system. You can right click on the icon given on the task bar to quit the app or make some changes to it like change diameter, add  color or image. Let us have a look at the key features of this app. 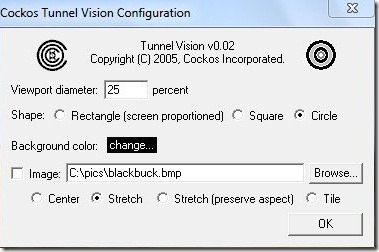 As you launch the software it will automatically your screen and will show only that part of the screen on which your cursor is. The part that it shows depends on the shape of viewport that you choose and size of the viewport. For example, in the first screenshot of this article, I have chosen a viewport of circular shape, so only a circular area of my screen is visible. As I move my mouse, the viewport will move along and will show only the area around the mouse cursor.

The software is very simple to use software and anyone can use it. It does not contain any option to set a password, which, I feel would have been an added advantage. Apart from that, it is also very  difficult to perform any task on the screen while the app is running, as only a small  part of your screen is visible, it proves to be a hindrance while doing any other task. So, while the software is running, it virtually blocks you. However, if you increase the size of viewport significantly, you can work comfortably, though that would take away the whole privacy concept of this freeware.

You can also try other similar apps like Dropcloth,  Blackout for Windows reviewed by us earlier.

TunnelVision is a very simple and basic app that allows you to highlight a very limited part of your screen. It is a good app if your want to hide something momentarily. But it has its own limitations that prove to be a deciding factor. The fact that it does not provide completely privacy and also makes it difficult to do some other work on screen can make users question its use.