This tutorial explains how to uninstall multiple modern apps at once in Windows 10. Modern apps, first introduced with Windows 8, can be singled out as the most radical feature added to the Windows family of Operating Systems. Featuring a streamlined minimal design, these apps (as well as other UI elements following the modern UI design language) were fast, utterly gorgeous, and include features such as real-time notifications, responsive layouts, and most importantly, live tiles. But even more than that, these apps represented the future vision for Microsoft’s OS line, that can be clearly seen materialized in the fresh from the oven Windows 10, which supports them even better than it predecessor.

Owing to a large number of excellent modern apps out there, it’s easy to get tempted to install a lot of them on your computer. However, this also makes getting rid of the apps you don’t want, one at a time, quite a time-consuming affair.

How To Uninstall Multiple Modern Apps At Once In Windows 10?

Uninstalling modern apps in bulk from your Windows 10 computer is a pretty simple thing. However, it’s important to note that you cannot uninstall system apps (e.g. PC Settings) this way (or any other way as well). Anyways, here goes a detailed illustrative walkthrough, that should get things rolling: 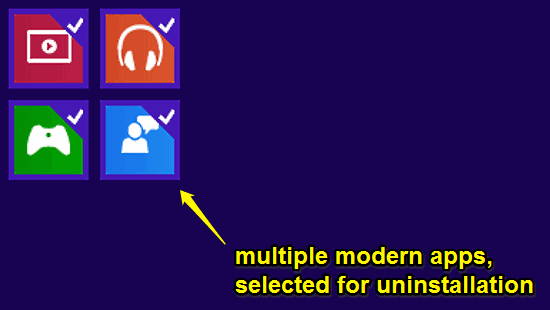 Step 2: Once you’ve made your selection, simply right-click on any of the selected apps’ live tile, and you should see a context menu pop up. Select Uninstall from the options. A warning box will pop up, requiring you to confirm your action, and telling you that this would lead to the removal of the selected apps from all the synchronized PCs. Hit Uninstall one more time. Check out the screenshot below: 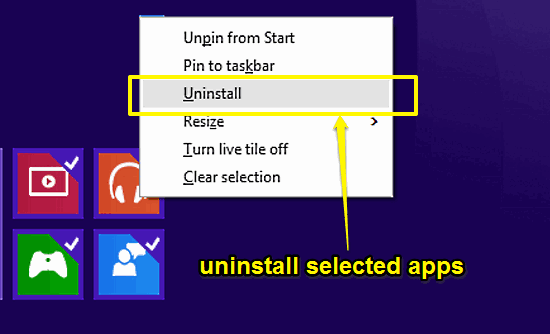 And that’s it. The selected apps will be instantly removed from your computer. How hard was that?

Check Out: Selectively Allow Services And Apps Through Windows Firewall In Windows 10

Modern apps are one of the most important changes ever made, not just to Windows 10, but to the entire Windows OS line. They are light, full of useful features, and work surprisingly well. However, getting rid of them one by one can be pretty tiring. But thanks to the process outlined above, you can handle them just fine. Try it out and let me know your thoughts in the comments below.