This tutorial explains how to edit HOSTS file in Windows 10.

In this age of real-time communications, having Internet connectivity is almost a necessity for every computer. That being said, there are certain settings (e.g. workplaces, schools) where some restrictions on the content that can be accessed over the web are in effect. And if you want to restrict access to some websites, you can easily do so by editing the HOSTS file.

Simply speaking, the HOSTS file is a system file that consists of information that’s used to map hostnames to IP addresses. Tweaking the HOSTS file not only lets you block certain websites, but it can also be used to redirect users to specific URLs. Sounds like something interesting? Let’s find out how to edit HOSTS file in Windows 10.

How To Edit HOSTS File In Windows 10?

Note: Modifying the contents of the HOSTS file in Windows 10 is a walk in the park. The best part is that you don’t even need a third party application for it, as it can be directly edited via Notepad. However, since it’s an important system file, ensure that you’ve backed up the HOSTS file before proceeding to make any changes to it.

Step 1: To navigate to the HOSTS file, go to “X:\Windows\System32\drivers\etc.” Here, X is the drive letter of the system partition where Windows 10 is installed. 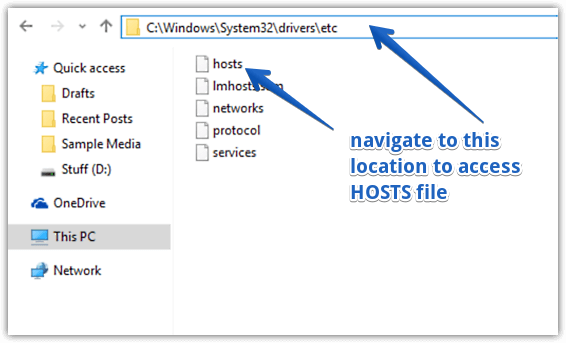 Step 2: You should now see the HOSTS file in the etc folder, conveniently named hosts. Open it in an instance of Notepad launched with administrator level elevation. The HOSTS file will have a few lines of introduction, followed by the IP addresses set to resolve to localhost. Each line is preceded by a # symbol. Now, start typing at a new line at the end of the last line, and type in the IP address, followed by the relevant domain. Each IP address and domain combination must be entered in a separate line. When done, save the changes and close Notepad. Here is one very important thing to remember: HOSTS file does not have any extension. So, while saving, make sure you do not accidentally add .txt or any other extension to it. 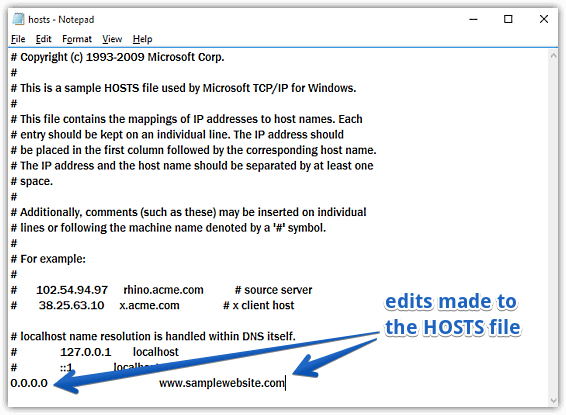 Editing the HOSTS file in Windows 10 is a simple and straightforward method of restricting access to some websites, as well as for redirecting users to certain URLs. And as seen above, doing so is a trivial affair. Give it a shot, and let me know your thoughts in the comments below.