To say that social networking services have completely transformed the way we communicate with each other certainly won’t be an exaggeration. Following the likes of Facebook and Twitter, a plethora of similar services have come up, and these let you share everything from filtered photos, to even your favorite restaurants. And one such social networking service is Twitch.

Often called the YouTube of the gaming community, Twitch lets gamers broadcast live streaming videos of their game-play, and includes features such as live chat and channels. It supports all major gaming platforms, such as Xbox and PlayStation. That’s all great, but what if you want to share the replay video of that awesome boss kill you just scored, with your friends?

Not a problem, as OddShot will do that for you. It’s an awesome little Chrome extension that instantly generates a 30 second replay of any Twitch streaming video, which can be then shared with others. Intrigued? Let’s take a look at how you can use OddShot to share live streaming Twitch videos.

How To Use OddShot To Instantly Share Live Streaming Twitch Videos?

Note: For OddShot to work, you must have a Twitch account (for obvious reasons). So if you don’t have one, simply head over to the service’s homepage to create a free account.

Step 1: Find OddShot on the Chrome Web Store (or click here), and when found, hit the Add To Chrome button. Once that’s taken care of, navigate to the Twitch streaming video whose 30 second replay you want to generate. After a minimum of 30 seconds of video has streamed, type in OddShot’s magical !shot command in the chat window. 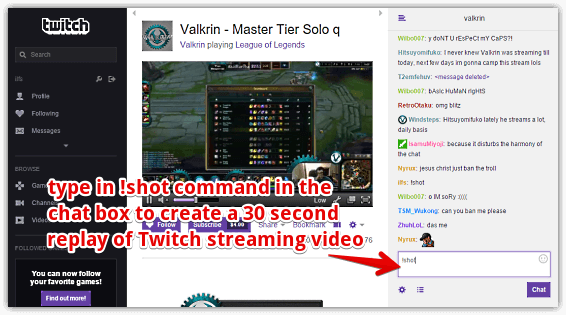 Step 2: As soon as you do that, OddShot will fire up a new browser tab, and in a few seconds, generate a replay of the last 30 seconds of the streaming video that you were watching. All you have to do now is click the Share button at the bottom right corner of the video, and use the unique URL to share the video over popular social networks. Here’s a screenshot: 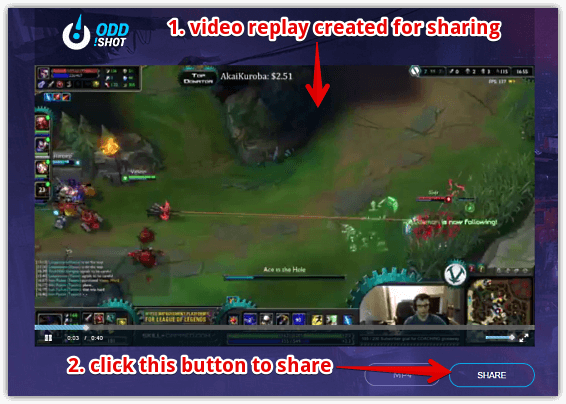 That’s it folks. You can similarly share as many streaming Twitch videos you want. How dope is that?