iSocialize+ is a free social networking app for iPhone which lets you manage your Facebook, Twitter, Google+, and Tumblr accounts at a single place. It lets you see all your news feeds at a single place by just switching through the tabs. You can post the status updates to Facebook, Twitter, and Tumblr simultaneously. In addition to this, the app also provides YouTube video streaming and image search powered by Google Images. You can share fun facts, virtual gifts, voice messages, edit images using the app. The app also acts as a birthday reminder for you so that you never miss anyone’s birthday again. There are still many more interesting features, so don’t stop reading if you want to know all of them. 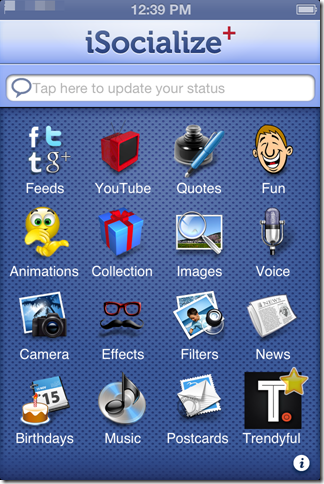 Key Feature of This Social Networking App for iPhone:

You can download the iSocialize+ by searching for its name on the App Store or by clicking on the link given at the end of the review. Tap on the icon to launch the app. Your first step towards using the app is to link your Facebook, Twitter and Tumblr accounts with the app. You can do so by tapping on the small icon at bottom right corner of the app. When you have linked the accounts, you are all set to use the app to the maximum. 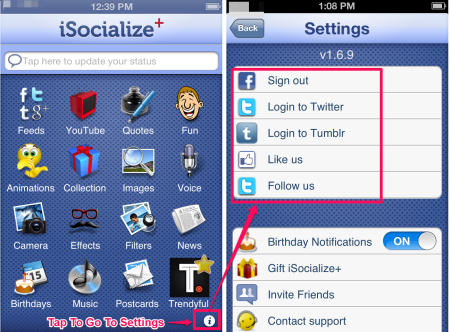 You will see a text box at the top of the screen. Tap on it to post your status to Facebook, Twitter or Tumblr simultaneously. If you are posting on Facebook, then you can choose to post it to your wall, friend’s wall, group, or your page.  You can also tag the location and friends to the status. 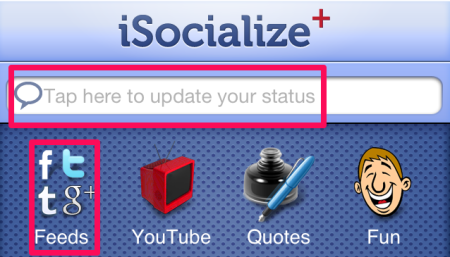 Just below the text box, you will see an option labeled as Feeds. This option displays you the live feeds of your Facebook, Twitter, Google+ and Tumblr account. Tap on the icon to access the option. You will find four tabs placed side by side for each of the social networks. Tap on the tab of that network whose live feeds you want to see.

Other Interesting Features of This Social Networking App:

Apart from the main task of managing the social networks, the app also provides you with some extra cool and interesting features to use. I have explained each of those below:

YouTube: It lets you stream videos directly from YouTube. You can stream videos by Search, Top Rated, Most Shared, Trending, and Top Comedy. Remember, the app only streams the video, it doesn’t lets you download them.

Quotes: This option lets you checkout various quotes categorized under many categories. You can sort them on the basis of Category, Authors, Keywords, and Favorite. The quotes can be marked as favorite by tapping on the star icon adjacent to them. It also lets you share the quotes on social networks.

Fun: You can check out some really funny Facts, Jokes, and Statuses here. You can also mark the ones you like as Favorite and share them.

Images: Search for various images and wallpapers. All the images are shown to you via Google Images.

Voice: Record voice message to share on your social networks. You can record voices in following styles: Normal, Chipmunk, Low, Faster, and Slower.

Camera: Click any picture from the iPhone’s camera and then edit it using this option. It lets you edit the picture by adding effects, stickers, drawing with fingers, text, remove red eye, crop, orientation and many more such features.

Effects: This option is just similar to the above mentioned Camera option. The difference is that you can use it to edit the photos from your iPhone’s local storage.

Birthdays: This option shows you the birthdays of your Facebook friends sorted by Date of Birth. It shows the number of days left in their birthday. You can also send virtual gift, images, videos and messages to them from here.

Music: You can listen to the music stored on your device as well as from iTunes too.

Postcards: This option lets you send real postcards of 4*6 inch anywhere in the world. You can send postcards for Love and Birthday occasions. The best part is that if your postcard gets lost or damaged in the mail, or you are not happy with it then they either send you a free replacement or refund you the money.

Note: There is a option called News in the main window which was not working when I tested it while two other options Filters and Trendyful open up your App Store to install some other app.

Check out  a similar all in one social media app Banjo for Android.

The iSocialize+ is a very good social networking app for managing your social world very easily. I found it very easy to see the feeds of my all 4 social networks i.e. Facebook, Google+, Twitter and Tumblr. The app was also terrific when I posted on all these networks simultaneously. It really saved my time of logging in to each one of the networks and then posting on them individually. Apart from the social networks, I also loved the interesting features that were provided by the app. Overall, I am very much impressed with the app. This social networking app is surely worth a try.

Get the iSocialze+ App from here.