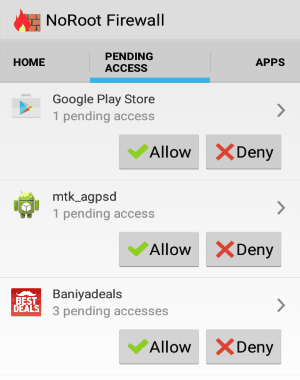 Note: This app declares itself as a VPN app to your Android device,  so that after starting this app, your device will route all the internet traffic via this app. By this, this app gets the authority to block internet access to any app it wants to. Do note that no actual VPN connection is made and no data is sent to the external VPN servers. So, it does not gives any added benefits or risks that are associated with VPN apps (like, WooGamble) for Android.

Now, let us talk about the steps to block an Android app from using the Internet while on mobile data.

How to Block an Android App to Access Internet on Mobile Data:

Step 1: After you install and open the app, you will see “Start” and “Stop” buttons on the home tab. Tap the start button and allow access to VPN connection to make this app work properly. It doesn’t actually connects to a VPN server and instead works as a firewall to block apps to access the Internet on mobile data. Simply tap the stop button when you are done using the app. 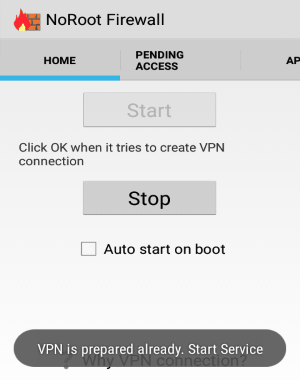 Step 2: This app runs in the background, which means after starting the service you can close the app. When an Android app tries to access the Internet on mobile data, you will be notified about it on the notification bar. Simply tap the notification to open the Pending Access tab of “NoRoot Firewall”. There you can allow or deny access to the apps for using the Internet, as shown in the first screenshot. 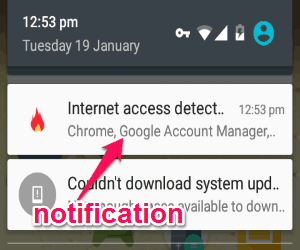 Step 3: It also has an option to allow or block default as well as the downloaded apps from accessing the Internet manually. Go to the “Apps” tab and choose whatever apps you want to block or allow access. Simply check the box adjacent to any app below the mobile network icon. Checking once means you’re allowing access to the apps, and checking twice means you’re blocking the apps. For example, if you want to block Youtube from connecting to internet on mobile data, just check the box corresponding to that. 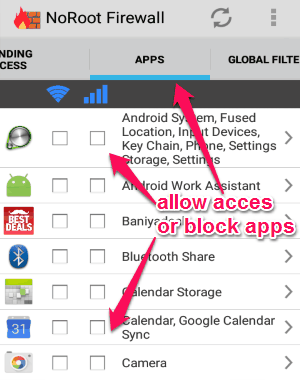 Step 4: All the details of the blocked and allowed apps will be visible on the “Access Log” tab. If you wish to unblock any app, then simply browse the access log to find the app and unblock it.

Also check out: How to Block Background Data Usage on Per App Basis on Android.

Other Features of NoRoot Firewall:

In addition to blocking apps for using mobile data, it also allows you to block Android apps to access the Internet on Wi-Fi.

Apart from that, it also supports fine-grained access control for websites. That means you can create custom (pre and post) filters based on domain name, IP address, and hostname, in order to allow or block any specific connection (Wi-Fi or mobile data) to the websites for accessing the Internet. Simply go to the “Global Filters” tab to create new custom filters. 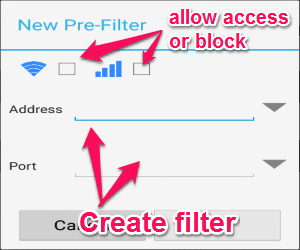 Get “NoRoot Firewall” from here.