Moo0 Screenshot is a screen capture freeware for Windows that lets you take screenshots and allows to save them in Bmp, Jpg, Gif, Png, and Ico format. Hence it provides five different image formats which is not provided by most of the other similar screen capture software. You can capture entire desktop screen, any opened window, or can capture a window part (like menu bar, toolbar, taskbar etc.). Hence it’s a useful software but its shortcoming is that you can’t capture a specific area by dragging cursor. 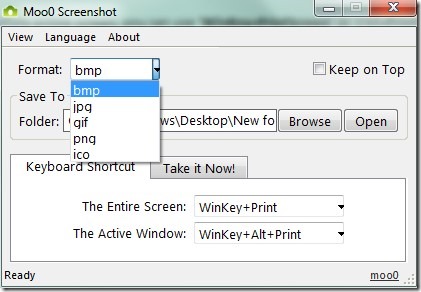 Key Features of This Screen Capture Freeware are:

Moo0 Screenshot is really useful screen capture freeware that saves captured screenshot in different formats (selected by you). But as it is not able to capture a specific area of a window, so it will disappoint users. So here it needs improvement.

We have also reviewed 4 free software to capture screenshots of videos.