Here is the list of 5 free image editors with pen tool for Windows. Using these freeware, you can precisely select a particular part of an image using Pen tool provided in their toolbox. It’s good to have an image editor with Pen tool as it lets you perform certain operations also such as copy, crop and delete a specific part of a image. Some of these software use different names for Pen tool but the functionality is same in all these freeware.

The Pen tool is a special image editing tool that is used to select a complicated part from the image that cannot be selected using general selection tools, like, Magic Wand. Pen tool uses straight lines and Bezier curves to select a particular portion of the image. You can select a part of the image by placing two points on its boundary and then adjust curve by dragging the points / control handles. To make a selection, just right click on the final point and the bounded part will be selected. 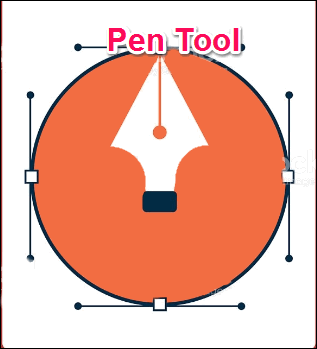 Inkscape is free and open-source Vector graphics software that has a large number of tool to draw, edit, and manipulate vector graphics. With Inkscape, you can freely draw any vector imagery. It’s a very nice tool for web designers, illustrators and many other people engaged in graphics. Inkscape offers many tools for editing and one of them is Pen tool. You can select this tool from toolbox of Inkscape, or you can also select it through keyboard shortcut, Shift+F6.

The Pen tool helps to draw paths using straight lines or Bezier curve. With this tool, you can trace the boundaries of a certain shape in an image or you can use it to cut, copy or delete that particular part from the image. 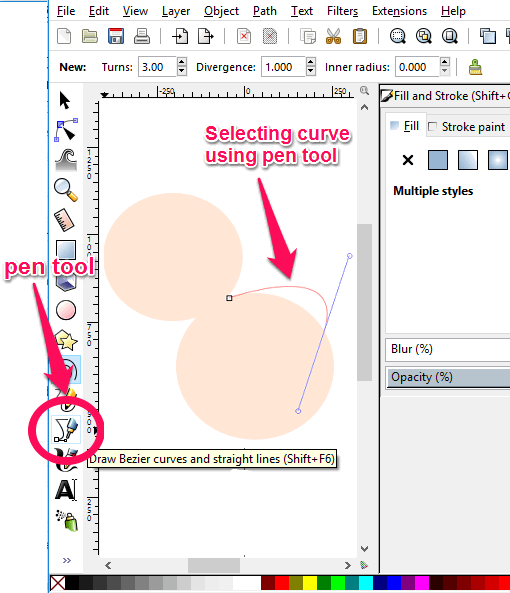 In the above screenshot you can clearly see the working of pen tool in Inkscape. This is a very good tool to use to select out that part of the image that you can’t extract out using conventional crop or Lasso tool.

In the screenshot above I wanted to select the curve that comprises of two circles, and copy it multiple times in the same drawing. I used Pen tool to achieve that and after all the selection I copied the curve in the image. You can see the result in the below screenshot. 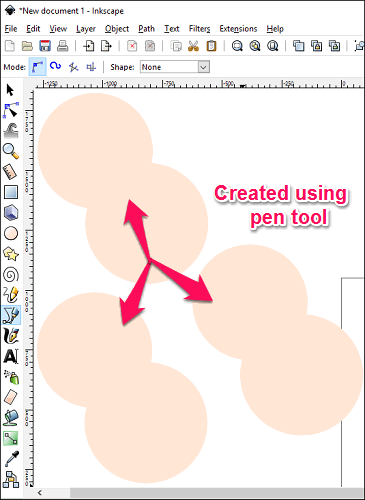 So, in this way you can easily use Pen tool to select, draw complex curves that can’t be selected using any simple selection tool.

Inkscape is very powerful software to draw vector graphics as well as a outstanding image editor, and its no surprise that this image editor has a Pen tool. Do check it out if you want to use Pen tool while editing your vector images.

Krita is a free Open Source Painting software, that includes a Pen tool as well. It was a part of Calligra free office but now it’s available as a standalone software. You can use Krita to draw different graphical objects. It offers other numerous features, as you can see it’s detailed review here.

Krita Desktop is loaded with tools, and one of them is Bezier Curve tool, that is same as Pen Tool.

You can use this Pen tool of Krita Desktop for precise cutting and selection of an image. The Pen tool is named differently in this software. With Krita you can easily make an accurate selection of objects from an image. See the below screenshot in which I tried to select only T-shirt and then paste it on a transparent background. 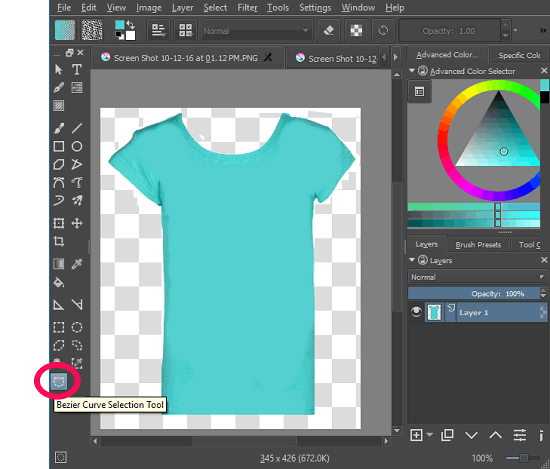 Overall, Krita works nicely and without any glitch. Krita comes with a multi-tab interface, so you can open multiple images together. You will find it similar to Photoshop and you will surely enjoy art of painting with this nice piece of software.

GIMP is another free image editor with Pen tool. Most of us already know about this free PSD editor as it is one of the best free alternative to Adobe Photoshop. GIMP is cross platform software so, you can enjoy it’s editing features in Linux and Mac as well. You can see a detailed review of GIMP here.

GIMP comes with lots of tools to edit images. And one of the tool that it provides is Pen tool, which you can easily find in its toolbox. The Pen tool in GIMP is known as Paths tool. So don’t get confused while using GIMP. 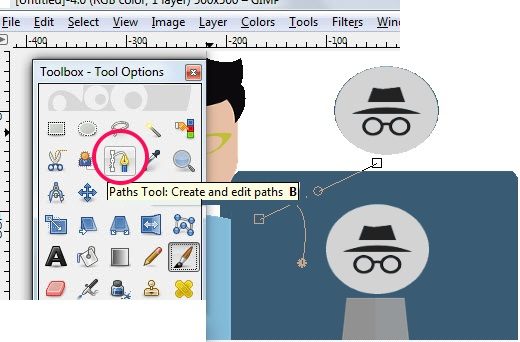 All in all GIMP is an another nice image editor with Pen tool. If you often need to edit PSD images, then this is a good choice.

CinePaint is another freeware that you can use to fulfill your requirement of Pen tool. It is portable and lightweight image editing software and you will find that it’s interface is similar to GIMP as both these software are based on same code base.

It has a lots of tools to edit an image, and one of them is Pen tool. Use this tool to select any particular region of the image very precisely. Pen tool has a different name in CinePaint. Here, it is known as Bezier Curves. You can select it from the toolbox of the software and start selecting a desired part on your image using straight lines and Bezier curves. And when you are done with selection, you can do anything with the selected part on your image. 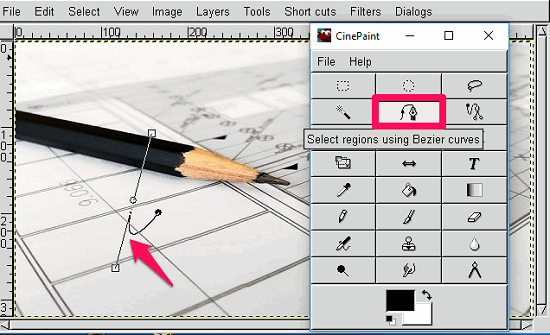 Overall, I find CinePaint is nice software that can fulfill your requirement of Pen tool. Download and give it a try to explore its features. Think of it as an alternative to other image editing software of its kind.

PiantStar is another free image editor with Pen tool. Just like CinePaint, it’s interface is also similar to GIMP. PaintStar is a lightweight software and it’s glitch free performance and rich tools make it a decent image editor. It offers crop, perspective, rotate, like basic editing tools also. It supports JPEG, PNG like popular image formats and also lets you export the edited image in the same format.

See the below screenshot in which I copied a circular part by using Bezier curve tool of PaintStar. 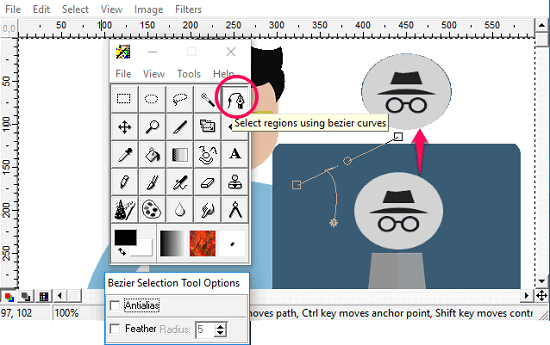 Overall, I find PaintStar a good image editor with Pen tool (Bezier curves). And it can be used for various other editing tasks as well. You can use it regularly for basic fixing of various images. Just give it a try by downloading it from the above link.

If you are looking for a free image editor with Pen tool, here’s list of freeware that can do that job for you. Not only for Pen tool, you can use any of the mentioned image editors as an alternative to other paid software such as Paintshop or Photoshop.

And if you know any other image editor with Pen tool, then let me know in comments below.