JellyCam is a free stop motion animation maker software that supports webcam. Using this software, you can easily create a stunning stop motion video by taking pictures with your webcam. It allows you to take unlimited new photos as frames for the animation video. Apart from letting you take pictures using the webcam, it also allows you to use your existing photos from PC. You can also add a pre-recorded voiceover or music to the stop motion video as a soundtrack.

It also comes with an option to add an intro frame on which you can add the title to the video and the name of the creator. The best thing about this stop motion animation maker is that it comes with a very simple and intuitive interface to help you create videos without much effort. Once you’re done, you can export the video or upload to YouTube for free.

Below is an example of stop motion video, I have created using JellyCam.

If you’re looking for something similar to create stop motion animation on your phone, then check out these 5 Free Stop Motion Video Maker Apps for Android

How to Create a Stop Motion Animation using JellyCam:

To use JellyCam on your PC, the first thing you need to do is install Adobe AIR on your PC. After that, you can proceed to download and install “JellyCam”. The download link is provided at the end of this post.

Once you’re done installing JellyCam, simply open it up and then you can see your webcam on the screen. Now, you can proceed to take photos that you want to use in the stop motion animation video. Before that, you can change the webcam resolution from “Settings” and also set a timer for taking pictures if you want. 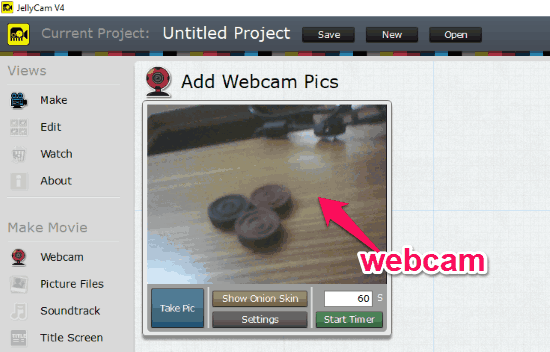 Now, to take a photo using your webcam, all you gotta do is point the camera at anything you want and hit the “Take Pic” button at the bottom of the camera screen. As soon as you do that, the picture will appear in the “Frames” section at the bottom. This way you can take as many pictures as you want which will be included in the stop motion animation video. 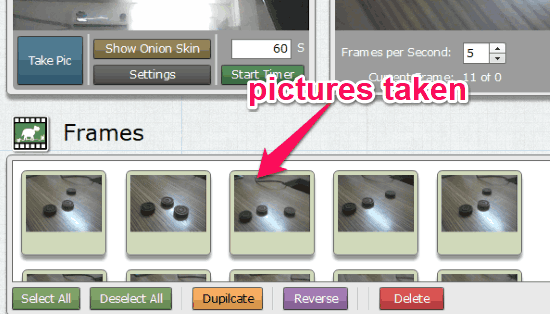 In the “Frames” section, you can rearrange the photos, duplicate photos, reverse order, and even delete any frame you want. Now, the stop motion video preview will be ready and you can play in on the right of the camera section. You can also manually choose the frames per second. 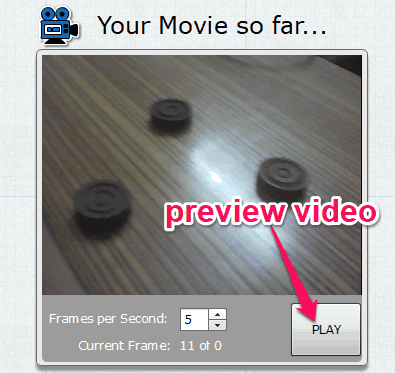 Now, under the “Make Movie” section on the left panel, you will see three other options named, Picture Files, Soundtrack, and Title Screen. The “Picture Files” option will allow you to add existing photos from your PC to the stop motion animation. The “Soundtrack” option can help you add any music or pre-recorded voiceover to the video. The last option “Title Screen” can be used to add an intro frame to the video with a title and creator’s name. 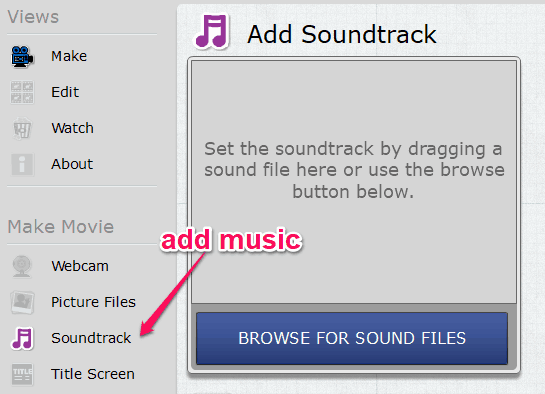 Once you’re all set, click on the “Create Video” button on the left panel and then you can export the stop motion animation video as an FLV file to your PC or directly upload to YouTube. You can also save the video and all editing as a JellyCam project such that you can later import it and start editing from where you have left. 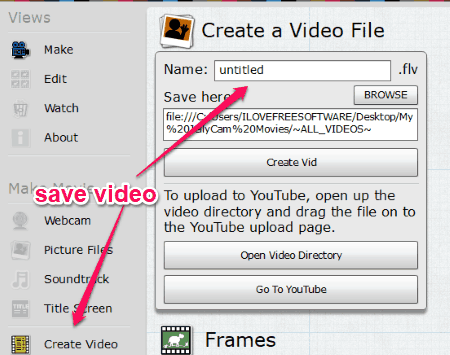