This article discusses 5 best visual file comparison software for Windows 10. Different people use computers differently, according to their needs. For everyday users, it’s about web browsing, media consumption etc., and for programmer folks, computers are machines used to create programs. Speaking of programmers, most of the times they have to work with numerous source code files, and often need to compare them side by side too. And this can be really taxing affair, especially in case of large projects.

But not to worry, as there are a number of code comparison software applications out there to ease the task. These programs let you visually compare multiple files, and include features like syntax highlighting, version control, and a lot more. Sounds like something you can use? Let’s jump in, and find out more about the 5 best visual file comparison software for Windows 10. 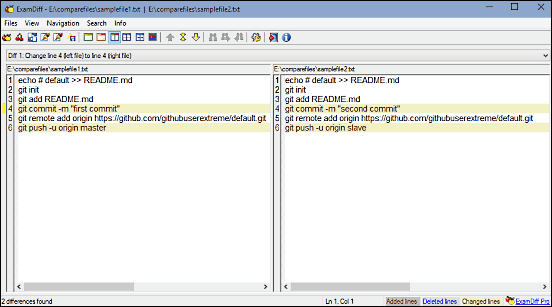 Simple and easy to use, ExamDiff is a feature laden visual file comparison software for Windows 10 that’s pretty lightweight and at the same time, incredibly powerful. Using the application is fairly straightforward, all you have to do is specify the two files that you want to compare, and ExamDiff will take care of the rest. It compares the contents of the specified files at rocket fast speeds, and displays the results side by side. All the differences (added/deleted lines, changed lines) are highlighted with different colors, which of course, can be changed by the user. ExamDiff automatically detects any change(s) effected to the compared files, and prompts the user to re-compare them. You can also configure the application to launch any text editor for directly editing the compared files, with the differences being saved as a UNIX DIFF file. ExamDiff is highly customizable, and you can tweak everything from fonts to tab sizes. The application also supports filtered viewing of results, and then are features like extension filter and synchronized scrolling enabled pane splitter. To top it all off, ExamDiff is available as a portable application, so you can take it anywhere you want. Read more here. 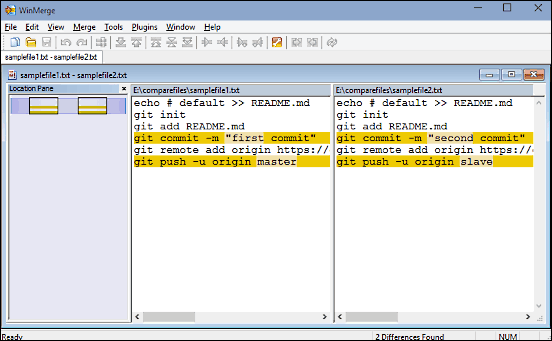 If you’re on the hunt for a versatile differencing and merging application, WinMerge is what you need. It’s an open-source visual file comparison software for Windows 10 that can effortlessly compare the contents of both files and folders, and output the differences in an easy to understand format. Just like ExamDiff, WinMerge also uses color codes to highlight the differences between the compared files. In addition to that, it supports syntax highlighting for a massive array of programming languages, such as C#, Java, Ruby, Verilog, and many more. Moreover, the tabbed interface makes multiple comparisons even easier. The location pane feature of WinMerge shows the map of compared files in a separate pane. As far as folder comparison is concerned, there are goodies like comparison using file sizes, and regular expression based filters. Then there is version control, and shell integration with 64-bit Windows versions. WinMerge is available both as an installable program, as well as a portable application. Visit this link to find more about it. 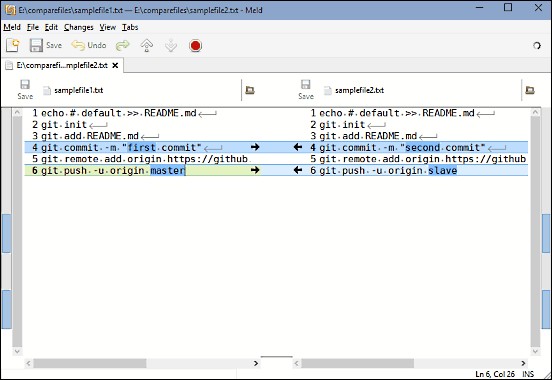 If you’re a fan of minimalism, you’ll absolutely love Meld. It’s a beautifully designed visual file comparison software for Windows 10 that comes toting a handy bunch of powerhouse goodies. Intended primarily towards developers, Meld is a diff and merge program that can compare just about everything, from files to folders to entire projects. It supports two and three way comparison, and the results update in real-time as you’re typing. The auto merge mode makes it incredibly simple to merge files. You can easily navigate between differences, and all the changes (insertions, deletions etc.) are marked with color coded highlights. Then there’s syntax highlighting as well. The directory comparison can be done for two or three directories, and unwanted differences can be filtered out. Meld is compatible with many versioning control systems. You can also tweak the application to show extra elements such as line numbers, whitespaces, and enable text wrapping too. 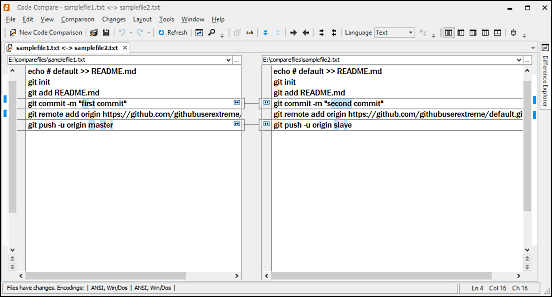 If you’re a programmer who has to compare multiple source code files and merge file/folder contents on a near daily basis, Code Compare is something you should definitely have. As the name itself makes it clear, Code Compare is a visual file comparison software for Windows 10 that’s designed for making sense of differing code files and project folders. It’s powerful application loaded with all sorts of bells and whistles, and the appealing UI only makes things better. Just like all other applications discussed so far, the changes in the text (additions, deletions etc.) are highlighted with colored blocks, within the lines. Merging the two is as simple as a click of the mouse, and you can use shortcuts as well. Syntax highlighting is available for a number of popular languages such as C++, JavaScript, Visual Basic etc., and any of these can be set as default. The handy difference explorer window on the right makes it incredibly easy to view the changes in the code. Rounding off the list are advanced features like automatic merging, multi-format versioning control, and hierarchical comparison. And this is all for the free version. If you want even more features, you can always upgrade to the pro version. Find out more about it here. 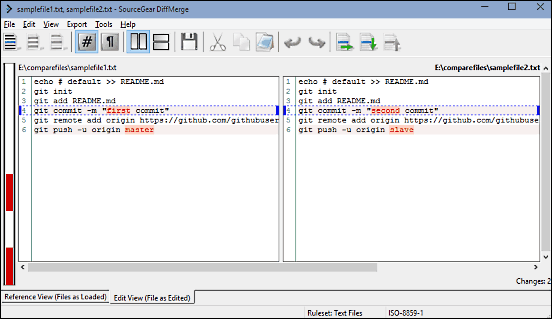 The applications discussed so far are all well and good, however, they have too options and settings crammed into them. That’s certainly not a bad thing, but what if you’re looking for something that’s a bit simpler? Not a problem, as that’s exactly what DiffMerge is there for. It’s a simple and straightforward visual file comparison software for Windows 10 that gets all the basics right, without becoming overwhelming in the process. The user interface of DiffMerge is pretty easy, and lets you compare two or three files. The differences are then shown side by side, complete with color coded inline highlights. The color coded highlights can be changed, and full editing support is there as well. Apart from that, DiffMerge can automatically merge the contents of the files after analyzing them, while still leaving the full editing control of the resultant file with the user. It can be used to compare contents of folders too, and full Windows Explorer integration makes instant comparison of two files as easy as right clicking on them. Click here to know more.

Comparison of files is especially important for programmers; however, it can be used by everyone for managing and organizing the files better and removing redundancies. And the above discussed visual file comparison software for Windows 10 work just fine for that. Take them for a spin, and let me know what you think in the comments below.