This tutorial covers how to use Notepad as calculator. Normally, we can’t perform basic Math operations using Windows Notepad. Sometimes, we need that and then we either open built-in calculator or use some other advanced calculators for that. But, there is a simple trick using which we can do addition, multiplication, division, and subtraction in Notepad. In simple terms, we can use Windows built-in Notepad as calculator.

To perform basic Math operations using Notepad, I am covering a free software here. This is named as “Notepad Calculator“. I must say its name suits it perfectly. I tested this software on Windows 10 PC and it worked pretty well.

In the recording visible above, you can clearly see that I was able to perform basic Math operations in Notepad, which is not possible natively. This software helped me to do so.

Note: The software is outdated but still works as it should. However, if it fails to run on your PC, then try to change its compatibility settings using Properties of its setup file and then run the setup as an administrator.

How To Use Notepad As Calculator?

Step 1: The first step is to download this Notepad Calculator software and install it. The link placed at the end of this tutorial will help you get its setup file.

Step 2: When the software is installed, run it and it will sit in Windows system tray.

Step 3: Now open Windows Notepad and do some addition, multiplication, etc. To get the answer, press Enter key available in Numpad. 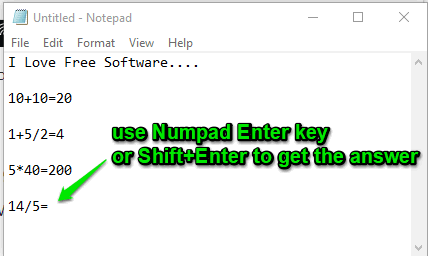 If Numpad is not available, then use Shift+Enter hotkey to get the answer.

That’s it! Use Notepad as calculator as long as you want. When you don’t need this software, you can exit it from the system tray.

Those who need to perform basic Math calculations and need some solution to do that in Windows Notepad, this software is handy. The best part is you don’t have to configure settings or other stuff to get the answers. Just install the software and let it run in the system tray and it will help you use Notepad as calculator.