Drippitt! is a Snake like multiplayer game for Android Devices. You control a drip snake that has to collect Blue drips while avoiding Red drips. The best part is, you can play this game with your friends over Bluetooth. In that case, there will be two snakes on the screen: one yours, and another of your friend, and both of you have to fight for the same Blue drips. The one who gets to them sooner wins. As the connection is via Bluetooth, so it is a pretty good game to play with your colleagues in office, or friends in colleges. It could be a good way to keep yourself entertained in that boring seminar ;) 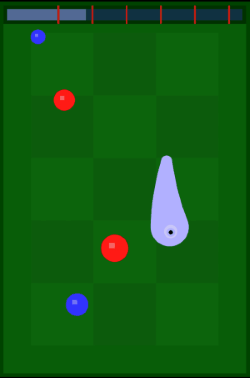 Even though this game isn’t very high on graphics, it is lots of fun. The Multiplayer mode is just amazing. Use your finger to control the Blue snake. You have to get the snake to the Blue drips that appear at random places on the screen. With each drip, the bar at the top grows a little. Your aim is to fill the bar completely. The tricky part is avoiding the Red drips. With every Red drip that touches you, the bar at top shrinks. An added difficulty of the game is a speed limit. If you move the snake too fast, it will shrink (so will the bar) and more Red drips will appear. So, even though you have to complete the game fast, you can’t do it too fast! Pretty tricky.

Here is a video of gameplay of this game:

How to Play Drippitt! Multiplayer Snake Game with friends:

To play Drippitt!, a Snake like multiplayer with your friends, both of you should have Android device and this game installed (obviously, duh!).

Once ‘Cyberspace’ mode is unlocked on both the devices, tap on New Game option in ‘Cyberspace’. Then allow it to switch on Bluetooth. Follow the same steps on the other Android device as well. Now, on one of the phones, tap on the screen and select ‘Create Connection’ then choose the other device from the list. On the other phone, choose the number of rounds (1-9) you would like the game to last. Then play on! 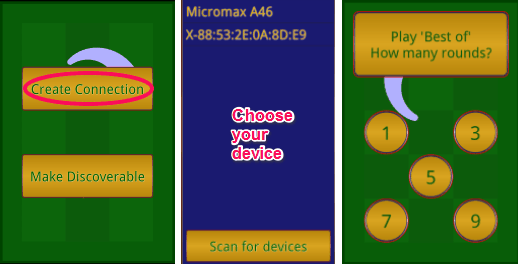 Once both you and your friend are connected, you will start seeing two snakes on the screen. Your snake will be in Blue, while your friend’s snake game would be in a darker shade. You are not working together, but competing with each other. Both of you have to compete for the same Blue drips that appear on the screen to grow your snake (and the bar at the top), and the one who fills his bar first wins. It is lot more fun as it sounds, as you might be going towards a particular drip to get it and your friend would come from the side and get it.

As I said in the beginning, an interesting caveat in the game is that you can’t move too fast. So, to avoid loosing your drips, move slowly. But you have to be quick in the multiplayer. So, when you see the edge of the screen turn Blue, dart to that edge, but keep your finger away from the edge. This will keep your speed in the limit and get to those drips faster.

Sometimes a timer appears at the center of the screen. Grab it as soon as you can. This timer once taken, make the snake immune to Red drips. If the snake touches a Red drip, it still increases it’s bar. This power lasts only till the timer runs out.

And if you like to play multi-player games on Android, what better than some Android chess games :)

Get Drippit! snake like Multiplayer here, or use the QR code below: 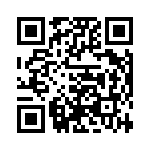