AfterEffects 101 is a free Windows 8 photo editing app consisting the best tutorials on how to use and understand different topics in Adobe After Effects 101. This photo effects Windows 8 app consists of several videos giving an overview of this app, videos for the beginners, and many more on how to know the basic concepts of the software so that one could work easily on Adobe After Effects 101 without any problem.

The interface of this app is designed in a very simple but attractive manner. Users find it very simple and easy to understand its process. Adobe After Effects 101 is an industry related software which gives us knowledge about all kinds of animations and from simple text fly-bys to vast multi-dimensional imaginary worlds. AfterEffects 101 makes the understanding of different principles of Adobe After effects very simple for its windows users with the help of its wonderful and standard collection of the tutorials on Adobe After Effects.

This free app of windows can be accessed from Windows 8 App store or you can visit to the link provided at the last. A screenshot of its home screen is shown below:

How to use and understand the different topics given in this app:

Once you have installed this app in your windows machine and run it, it will appear like the screenshot shown above. If you slide it on the right side, the below screenshot will appear on your screen. 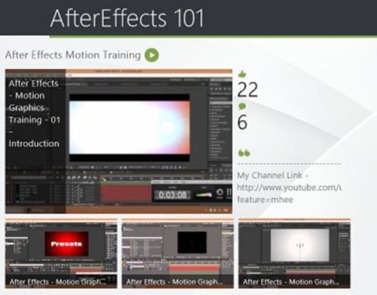 Thus, every time you slide it on the right side a new screen will appear with new topic of tutorials. Some of the topics are mentioned here. Intro to After Effects consists of videos which describes about the Adobe After Effects and its usefulness. It tells us the concepts of it on how it is fruitful for animation and video compositing. After Effects for beginners is the section of this app which consists of videos on basic concepts using which a beginner can get an idea about this software and how to change certain things in this software. In similar way, there is another section on Motion graphics training where one learns the speed and control of small things during compositing and 2D and 3D animation. The above three are the ways to get well acquainted with the software. Sliding more to the right on its home screen will bring you some new topics which are discussed below:

AfterEffects 101 is a nice app for creating professional motion graphics, and visual effects effectively for CD,DVD and web. It gives you a collection of tricks using which you can become more efficient in working on Adobe After Effects. You can visit this link here to install this to your windows machine.