iFiveChess is a free game App for Windows 8 to have fun. You can say that it is a brain exercising game. This game is quite similar to tic-tac-toe game. Remember playing tic-tac-toe with your friends, where we are supposed to create a line of zeroes or crosses. The version we used to play as kids was limited to a grid with 9 boxes, this app has a lot more boxes to fill out with zeroes and crosses.

This iFiveChess game is based on creating a line consisting of five O’s or X’s continuously. Once you have made this, you win the game. The interface of this app is kept simple with no attractive colours. It is simply a chessboard with more than 64 boxes and is kept completely white. A screenshot of its interface is shown below: 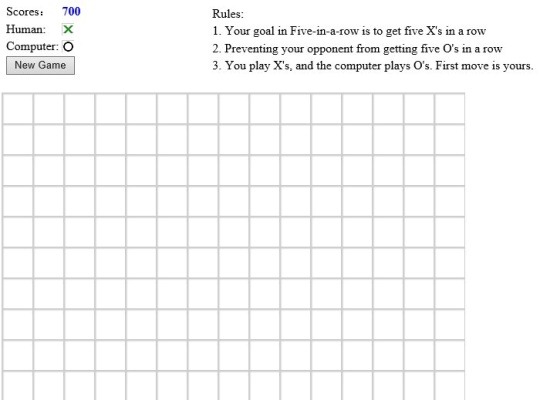 How to use and play with this app:

After you have installed this game in your windows 8 machine, run it from its icon present at Metro UI interface. When you run this app on your windows machine, a screenshot like the above will appear in front of you. In this game, basically you are supposed to get Five X’s in a row and prevent your opponent from completing Five O’s in a row to win a single game. Every person has his own strategy if he is new to the game. I have played this game and found it very interesting. So, I would suggest you to explore this game yourself and master each move of yours and your opponents too.

One strategy which seemed to work for me was when starting a game always put a X at any of the corners. It is one of the basic concepts on how to protect your opponent from winning the game. Playing from any corner closes two directions for your opponent and hence it gives you balance to concentrate on the game initially. While playing from the centre opens up all the four directions making you puzzled what to do in the initial stages of the game. A screenshot of this game played from centre is shown below: 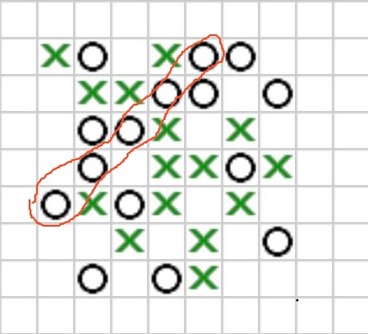 In this windows 8 app you are up against the computer. You are assigned ‘X’ and the computer has ‘O’. You can see from the above screenshot that computer has won this match as it has made five O’s in a row. So my advice is for initial couple of games that you play try to draw the games. Once you think you know and understand the game better, make your moves to win the game.

Key Features of this App:

Also check out Windows 8 crossword puzzle app reviewed by us.

iFiveChess is an amazing game for Windows 8 to test your brain skills. The interface design of the app is minimalistic and clean. This app has been built and tested for accessibility, making it easier for everyone to use. If you are willing to have this game installed in your windows 8 machine you can get this app here.