ESFSoft Media Player is a free audio video player to play media files of all modern formats and helps to take snapshots from playing video. It is a product of ESFSoft website and any popular audio video format file, like mp3, mkv, mp4, vob, wmv, aac, ac3, 3gp, avi, mov, rm, etc., can be played with this audio video player.

Apart from playing audio video files, it is able to play animated gifs as well. Thus, you won’t need any gif viewer software to install on PC for playing animations. It’s a simple player but having few shortcomings as well. Such as it can play only a single media file at a time and there is no playlist creation option available, like it is present with other similar media players. 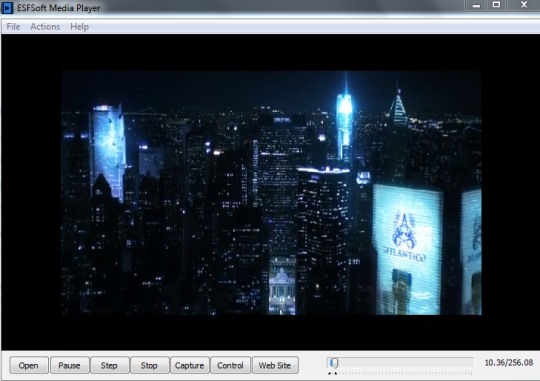 Screenshot above shows interface of this audio video player. ESFSoft Media Player provides basic playback controls at the bottom part. You can open a media file, can stop it, pause it, and can use Step button to view video step by step. More in this, Capture button helps to take snapshots from playing video. Each captured snapshot will be saved to default destination location in bmp form.

Apart from these buttons, you won’t find much options on its interface. But a Control Box is available which can adjust basic settings for playing video. Hit on Control button to access control box. You can adjust brightness, saturation, hue, can adjust audio, and can select aspect ratio (4:3, 16:9, 1.85.1 etc.) for video. 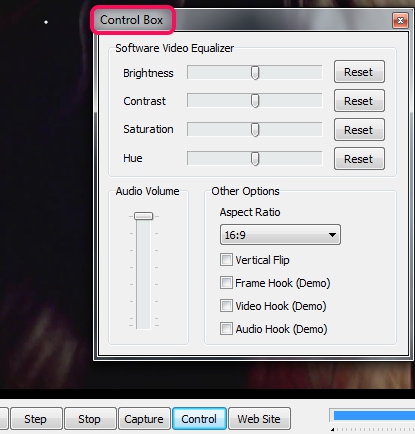 Some Key Features Present In This Audio Video Player are:

ESFSoft Media Player provides some useful features, like capture snapshots of videos and ability to play animations. But you cannot create playlists neither you can add multiple media files to play. It can be a nice media player if you have to watch a movie lying on your sofa. So these major shortcomings need to be improved in future to make it more useful. If you are in need of more feature rich media player, then give a try to Blues Media Player and Wondershare Player. Two of these players can convert media files too.

Other software of ESFSoft reviewed by us are: ESFSoft Video Converter and ESFSoft Audio Converter.