1888 Ladders & Snakes is a free snakes and ladders multiplayer game for PC. This lets you play and enjoy your favorite board game “Snakes and Ladders” right on your PC. The best part about this game is that you can play it with multiple players. To start playing this multiplayer snakes and ladders game, all you got to do is choose the number of players, enter the player’s name, and start rolling the dice turn by turn. With each outcome of the dice, a player will move his/her pawn along the numbered boxes as per the number achieved after rolling the dice. You can either choose 2 players, 3 players, or 4 players to play this snakes and ladders game. Even though it is a multiplayer game you can’t play it on separate PCs which means all the players must play it on the same PC.

The main objective of each player will be to cross all the numbered boxes until he/she reaches the 100th box. Along the way, if the pawn of any player stops at the bottom of a ladder then the pawn will climb to the top of the ladder. On the other hand, if a pawn stops in any numbered box which has the head of a snake, then the pawn will descend to the box on which the tail of the snake is drawn. That means the number achieved after rolling the dice is the only crucial parameter to win the snakes and ladders game. The game will automatically end when any of the players reach the end of the board (100th box). 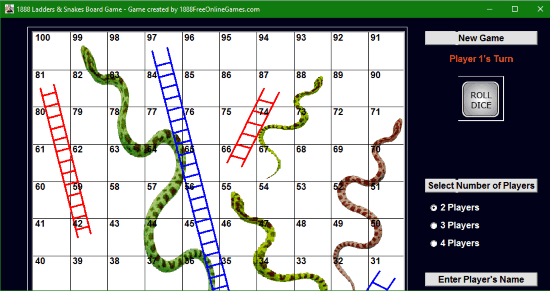 How to Play Snakes and Ladders Multiplayer Game on PC:

First, you need to simply download and install “1888 Ladder & Snakes” on your PC. You will get the download link for this game at the bottom of this post. When you’re done installing it, simply open it up and you will see the “Snakes & Ladders” board on the left of the window. The board will consist of numbered boxes starting from the number “1” and goes all the way to “100”. Apart from that, you will also see some snakes and ladders drawn across the numbered boxes. 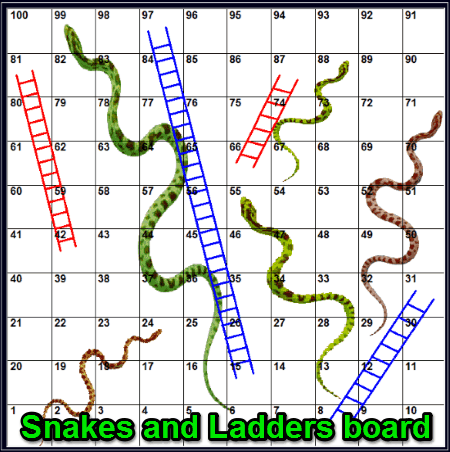 Now, to start playing the Snakes and Ladders game, you would need to select the number of players on the right of the board. It lets you play the game with 2 players, 3 players, and 4 players. After selecting the number of players, you will also be able to enter the player’s name, as shown below. For each player, it will provide a pawn with different color such that the players will be able to easily point out their pawn on the board. 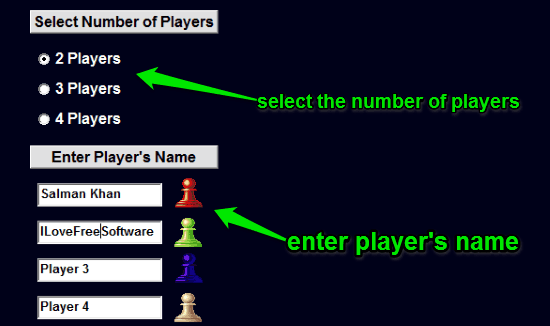 When you’re done with selecting the player and entering their name, you can go ahead and let the first player roll the dice by clicking the “Roll Dice” button on the right. As soon as the dice is rolled, the player will achieve a number among 1, 2, 3, 4, 5, and 6. After that, the pawn of that particular player will move to the numbered box corresponding to the achieved number. Once the turn of that player is complete, the next player will get his/her turn to roll the dice.

This way all the players of the game will roll the dice and move their pawn in turn. As I have mentioned above, while moving the pawn on the board, if it stops at the bottom of a ladder, then it will automatically climb to the top of the ladder. This can help the player win the game quickly. Not only that, if you climb a ladder, then you get a bonus to roll the dice again. But, if the pawn stops in any of the numbered boxes with snake’s head on it, then the pawn will slide down automatically to the tail of the snake. When any of the players moves his/her pawn to the “100th” numbered box, the player will win and the game will end. 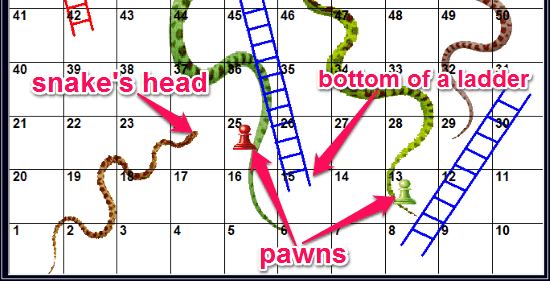