Soccer Stars is a free iPhone soccer game which lets you play with your friends as well as with strangers online. You can also choose to play the game with strangers in online mode and practice the game in offline mode. The game has two modes for playing: 1 on 1 and Tournament. The 1 on 1 mode consists of single match while tournament mode consists of multiple matches. In tournament mode, you have to win each of the match to win the tournament. You can also choose the formation of your team for making tactics and outperforming your opponent.

You can choose from 5 different locations: Brazil, South Africa, Russia, Korea-Japan, and England. The game has Red and Blue teams by default while you can unlock some international teams as well like Brazil, England, USA, France, Germany, Spain, Italy, Argentina, etc. You can also unlock various other rewards. The game even lets you link your Facebook account with the app. 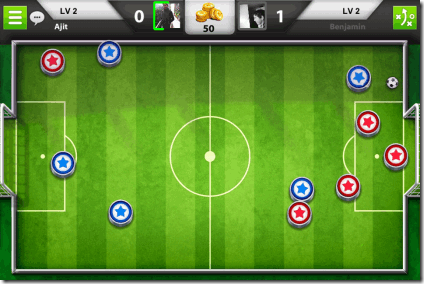 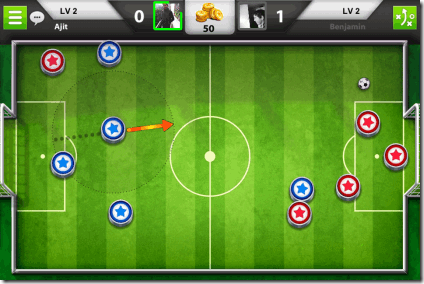 On the home screen of the game, you will find following options: Play 1 on 1, Play Tournament, Play Minigames, Play with Friends, and Practice Offline. Tap on the game mode which you want to play . In each of the mode, you have to pay a minimum amount of virtual currency (Entry Fee) to play the match. At the end of the match, winner receives a specific amount of virtual currency (Prize) which you can use to play the matches and tournaments having a higher entry fees. You can also use this virtual currency to purchase premium items (like International teams) from game’s shop.

While playing any match, you can send messages to your opponent. These messages are available by default like Well Played, Nice Shot, Oops, Thank You, etc. which means that you can’t send custom messages. Besides this, you can also change the formation of team in the middle of the game, whenever you want. As you will keep on playing the game, you will proceed in term of personal levels. Whenever you will cross any level, you can also share it on Facebook. 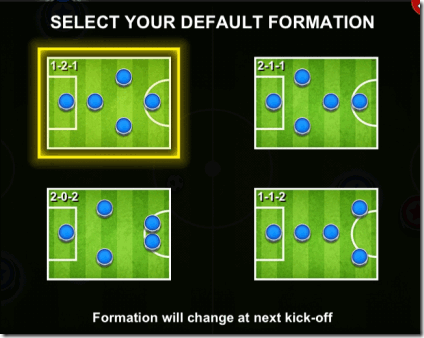 You may also like following iPhone games: FIFA 14 and Head Soccer reviewed by us.

Soccer Stars is a good and entertaining iPhone soccer game which can keep you busy for a good amount of time. The ability to play with your friends  and online with strangers makes this game even more interesting. The game is really fun to play, especially when played with friends and closed ones. Do play this game if you are a fan of iPhone soccer games.