FIFA 14 is the official FIFA game from EA Sports for iPhone. The game is the next installment to one of the most famous game franchise which is known as the FIFA by EA Sports. The main USP of this game, like every other earlier game in this franchise, is realistic graphics, commentary, and official teams, players, stadiums, merchandises, and leagues. The game has different modes for you to play. You can also play FIFA 14 online with your friends as well as with other users. The game lets you create your own team and also play with Games of the Week, FIFA 14 Ultimate Team, and FIFA Team of the Week. If I talk in numbers then let me tell you that FIFA 14 consists of 33 leagues, 600+ licensed teams, 16,000+ players, and 34 authentic stadiums to play! In fact, the game download size is 1.8 GB. This is the biggest game I have downloaded on my iPhone till now.

You can get the FIFA 14 for iPhone either by searching on the iTunes App Store or by clicking on the link given at the end of this review. You can start playing the game by signing in with your existing Origin account. If you don’t have one, then you can get it by signing up from within the game.

The main menu of the game has 4 game modes: Ultimate Team, Team of the Week, Penalty Shootout, and Games of the Week. 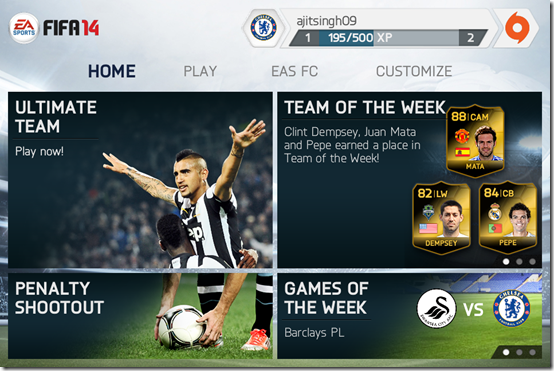 Besides these modes, the game also has following three modes: Kick Off, Manager Mode, and Tournament Mode. All these 3 modes come with the paid version of the game which you can buy for just $4.99 from the iTunes App Store.

Other Features Of FIFA 14 For iPhone:

Apart from the above mentioned game modes, the FIFA 14 for iPhone also has various other interesting features which make this game even more interesting and fun to play. Lets have a look at them. 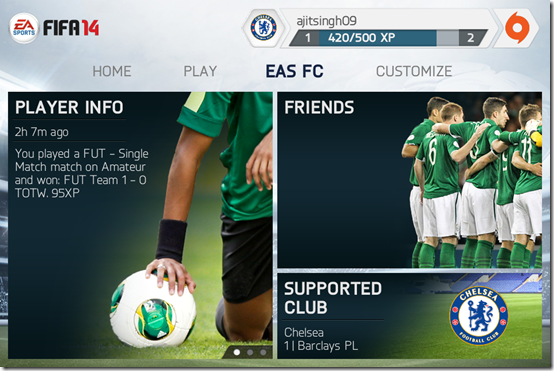 I found FIFA 14 for iPhone just like the way I expected it to be. This game delivers 100% to the expectations of the tag that carries of FIFA franchise from EA Sports. Just install the game and I bet that you will not get disappointed by it. I know the download size of the game is HUGE but its definitely worth it, considering the high quality graphics, visuals and audios that it supports. So no matter you are soccer lover, FIFA lover, or just a lover of high graphic games, just go for it.