Taplet is a free iPhone app to extract photos from videos all in one place. No more use of heavy software such as Image Grab, Batch Video To Image Extractor, and many others to extract photos from videos, as you can easily use this app on your iPhone to do so with ease. Sometimes, you might keep taking photos until you get the perfect shot, but this app lets you shoot a full video from which you can later extract HD photos of the perfect moments. Are you bored of taking screenshots of videos? Then my friend this amazing app is definitely for you. You can either upload videos from your camera roll or record a video within the app and pull out your favorite scenes as an image.

It also comes with some useful features such as you can record a video at 60, 120, and 240 FPS (frames per second), extract unlimited photos, use built-in enhance tool, and save or share high-quality photos. This app is quite similar to another iPhone app “Vhoto“, as “Taplet” also lets you extract photos from videos and share them via Instagram, Facebook, Twitter, etc.

The following screenshot shows the extracted frames from a video. 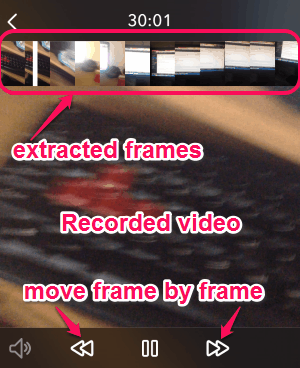 No more blurry photos while riding bikes, water surfing or skateboarding, as this app allows to extract still photos from a moving video.

How to Extract Photos from Videos:

Download and install the app from the link provided at the end of this post or from the App Store.

How to record a video:

As soon as you open the app, you will be able to see the built-in camera. You can instantly start recording videos which will get saved in your camera roll. It lets you toggle front and back camera and also enable or disable camera flash. After you are done with recording, it will show you an arrow icon on the right top of the screen. Use the arrow icon to proceed further for extracting photos. The following screenshots shows how to record a video. 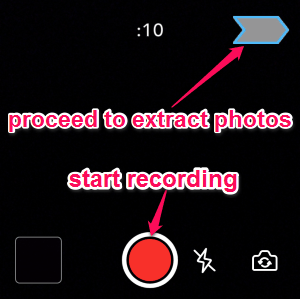 How to extract photos from a video:

After you have recorded the video, simply proceed to play and extract photos from it. The number of frames is shown at the top of the screen. While playing a video, the arrow buttons can be used to move frames one by one. Simply tap on the screen while playing a video to extract photos. All the extracted photos can either be seen on the app’s library or can be saved on your camera roll. The same arrow icon will appear at the top, using which you can proceed for editing the photos. The following screenshot shows how to extract photos. 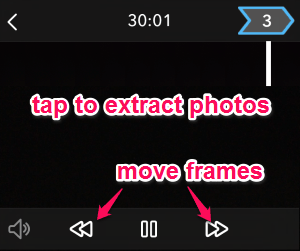 How to enhance photos:

The app has a built-in enhance tool, which can be used to retouch your photos and make them astonishing. When you’re done with selecting frames, you can start editing them. All you have to do is tap the tool icon and you’re  done. The resulting photos will be of high-quality and beautiful. Now you can share them directly from the app via Facebook, Twitter, Instagram, etc. The following screenshot shows how to retouch photos. 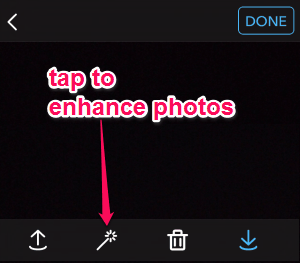 Taplet is probably one of the best ways to extract high-quality photos from your videos. All you have to do is record or import a video and tap the screen to get HD photos, easy-peasy. The enhancing tool is quite useful to make your photos look astonishing before sharing.