In this article, we will discuss about London 2012 Results App; official Android Olympics app in Google Play Store, Olympic Calendar Free; check date wise events and games to be held this year, London Olympics 2012, and more. 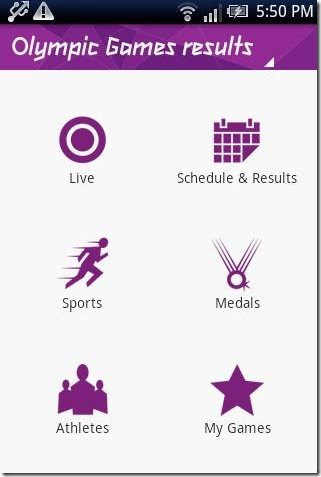 London 2012 Results is an official Android London 2012 Olympic app. All the data, updates, and information are directly updated from London 2012 Olympic team. This Android Olympic app is a brilliant and all in one app with all the information of Olympics 2012. You can check days and time left to start London Olympics 2012. You can check out schedules day wise that makes easy for you to know the games that will be played on a particular day. After checking out calendar, you can plan your daily schedules accordingly to watch the Olympics 2012. Go through the list of the sports beautifully presented with their icons on Android. Check the number of medals won by different countries. The app allows you to check the medal status for countries, athletes wise, and sports. Overall, this is a pretty good Olympics 2012 app for Android. 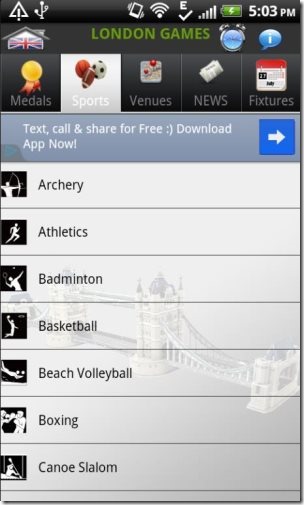 The app allows you to check different sports with their date, time, and venue on which the game will be held. This helps you too keep a track of upcoming games. You can easily watch them on time and don’t miss out a single game of your favorite sport. The good part of the app its smart calendar option. You can easily check the timings of the game according to the date for which you want to check. 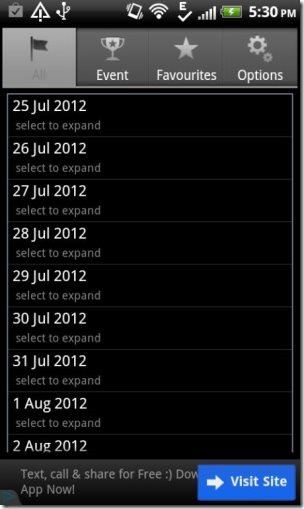 Olympic Calendar is a free Android Olympic app that provides all the dates from start date to end date for every Olympic game. On launching the app, you will find the list of all the dates starting from 25th July 2012. Single tap on the date to check more information. The app tell the name of the games or events that will be held on that particular date. You can also check events which include Mens Doubles, Mens Singles, Mixed Doubles, Womens Doubles, and Women Singles.  Tap on the events to know more about them. Long-press on any event or game to add them as favorites in Olympic Calendar. 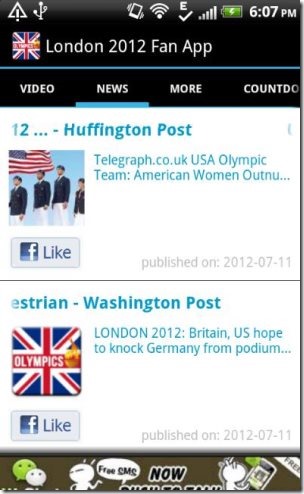 London Olympic Games 2012 News is a free Android Olympic app that provides daily updated Olympic news on Android. This Android Olympic games app is a nice app that provides news and videos. Videos in the app is for the situation when you miss to watch the live broadcast of the London Olympic games 2012. Along with the news and videos of the game, the app also provides the live countdown time left for the games to start. So install the app, if you want to keep yourself  updated with the game news. 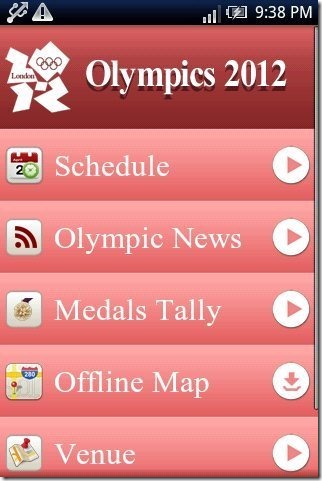