Playing songs from the FTP server can be useful in case you often keep media files on a FTP server. And if you want to stream songs from FTP, without downloading them first, then here’s the list of some free media players which can do that for you.

Let’s see how to play songs from FTP using these free media players.

XMPlay is a lightweight and one of the best free media players to play songs from FTP. It comes as a portable software and you can play FTP songs after specifying the FTP path of the music directory. When you specify the path of the music folder in it, it automatically searches for the songs and lists them in the playlist. After that, you can start playing them by simply clicking on their names.

As, it comes as a portable software, so you can get started with it pretty easily. To start playing songs from an FTP server, click on the Eject button and after that, Open files window will pop up. At the bottom of the open Files window, there is an URL field to play songs from remote locations. Here you can specify the FTP link to the music folder with login details in the following manner.

After, you have specified the FTP path to your music directory, it will scan the FTP folder and will start listing songs that it finds. And when it finishes the scan, the first song in the playlist will start playing.

So, in this way you can use XMPlay music player to play songs from FTP. XMplay makes it pretty easy to do that. All you have to do is provide an FTP path of the music folder and XMPlay will do the rest.

MpxplayMMC is another free media player to play songs from FTP. Though it has a very old design, but it’s quite a powerful media player to play songs, videos from local and remote locations. It supports popular audio formats such as MP2/MP3, AAC, FLAC, MPC, VORBIS, WMA, etc. It comes with a setup file that you have to use for installing it on your PC. Also, it has a built in equalizer and playlist editor to organize music. And the best part is that it comes with a built in File Explorer that you can use to locate music files on your PC. To play songs from FTP directory, you will have to configure it first to use FTP directory as the music source.

Grab the setup of MpxplayMMC from the above link and install it. After that, launch it. Now navigate to the Tools > FTP Connect menu. After that, a window will pop up where you have to specify the FTP credentials of your FTP server. To do that, hit the New Conn button and fill all the fields with the appropriate details. And once finished, click on OK button to return back to the Connect to a server window. Choose your newly added FTP site from it and hit the Connect button.

If the connection is successful, it will list all the supported media files in the playlist. And you can start playing songs by clicking on their name.

So, in this way, you can easily play songs from FTP using MpxplayMMC. And what I really liked about this media player is that it can also play videos from the FTP server.

Media Portal is a free and open source software that can be used as a replacement for Windows Media Player. It offers numerous powerful and interesting features that you will love. Using this free media center, you can watch live TV and listen to your favorite songs and Radio stations. Apart from all these features, it also lets you play media from remote locations such as from an FTP server.

Using Media Portal, you can easily import songs from an FTP server. To do this you will have to do a certain configuration in it to make it play songs from FTP. After doing so, you will see the list of FTP songs on its interface and you can then listen to them.

Getting started with Media Portal is a bit tedious. You can see its recommended system configuration here. After successful installation of Media Portal, you can configure it by running the Media Portal Configuration application. After that, the configuration window will pop up. Now, navigate to the Music category from the left side of the interface and expand it. Choose Music folders option from it and Click on Add button.

Another window will pop up. Give a name to the collection in the Visual Name field. After typing the name, check the This is a remote FTP folder. All the disabled boxes will now become enabled and you can type the FTP server credentials here. And when you have typed the FTP credentials correctly, simply exit all the windows. 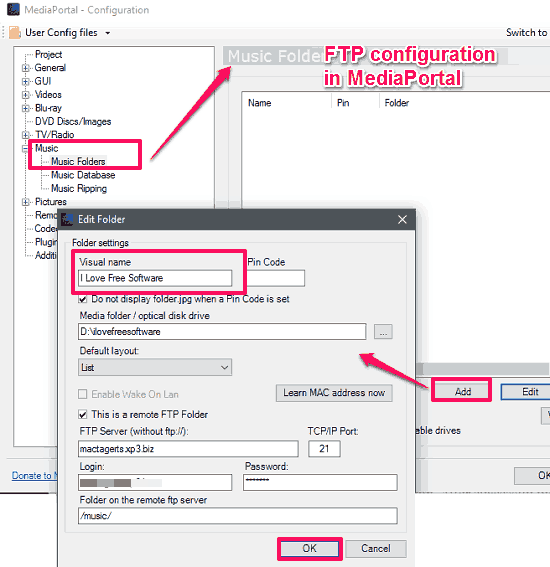 At this point, the FTP server has been added to the list and you can now open the Media portal application. You will see a music directory will appear with the same name that you have specified during the FTP setup. When you click on it, you will see list of all the songs from the FTP directory. When the list of songs appears, you can click on any of them to start playing. Do note that, the songs are not downloaded yet; they will be downloaded only when you choose to play them. 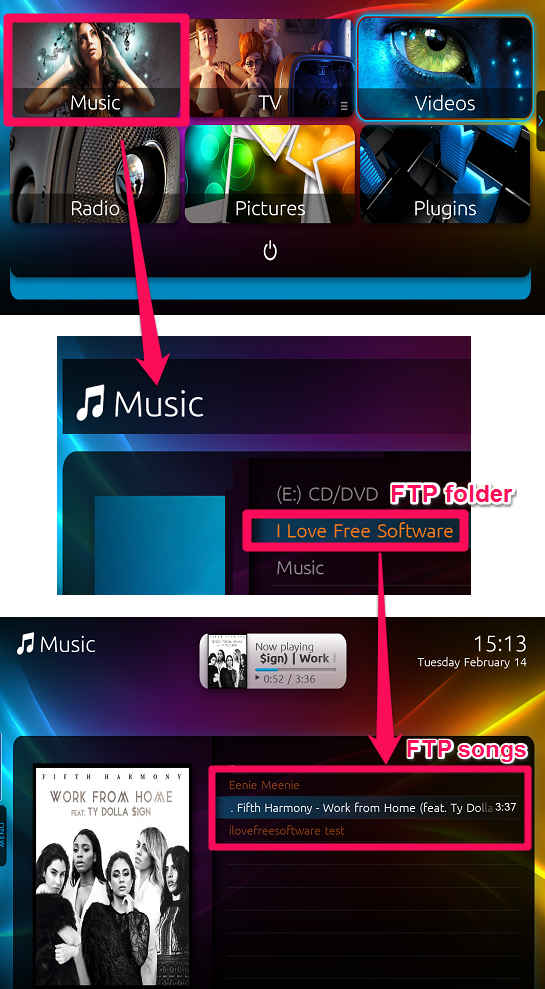 So, in this way you can easily play songs from FTP using Media Portal. And of course, you can also listen to the locally stored songs on your PC by adding the music directory of your choice.

Plex is a free media server that you can setup and add your music, videos, and images and access them from anywhere. One interesting feature of Plex is that you can add various media sources on it. Surprisingly, there is no direct option to add FTP as a media source in Plex. But don’t worry, I have found a way to access your media files stored on an FTP server from Plex.

You already know that Plex uses local drives to import media files. So, what we can do is mount an FTP music folder to a virtual drive and then browse it from Plex. To do this, you can use FTP Drive, a freeware to mount FTP folders as local folders. After that, you can add that folder to Plex, and Plex will then show all the FTP media from that folder. You can then play any FTP song or video in Plex directly, as you would play any local media file. You can read this process in detail here: How To Play FTP Songs, Videos In Plex.