One Touch Drawing game comes up with multiple puzzle to solve on your Android phone. There were around 100 puzzles in this app. Whenever you are getting bored and want to do some intelligent work on your Android, then this Android drawing game is the perfect task to play on Android.

This Android game comes up with simple options on Android. Just launch the game and start playing it on your Android phone. The game rule is that you have to draw each line in the given drawing only once without repetition. Increasing stages increases the game difficulty. 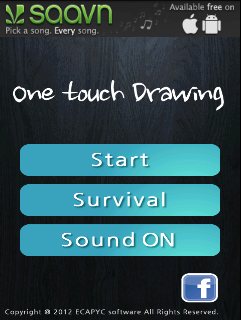 You can check out Sketch App for Android reviewed by us.

Take a look on Sketch n Draw app for Android reviewed by us.

How To Install One Touch Drawing Game On Android:

The free One Touch Drawing game will be automatically installed. Just play this brain storming game on your Android phone. Hurry up and install this free version today before it becomes a paid game in Google Play Store.