Zorin OS is a free Linux distro which have a similar look and feel like the Windows 7. Many Windows users out there want to change their OS as they are frustrated by the threat of virus and tired of running RAM hogging antivirus always in the background and updating them every day wasting valuable bandwidth.  You may have sometimes tried different Linux distros to switch from Windows 7 but the main problem the majority of the users face is the problem of adapting with the new environment. 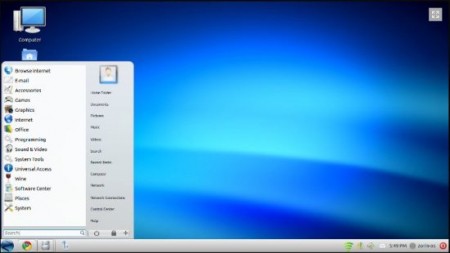 The most offered Linux distro to the new Linux users is Linux Mint but the many users often complain that the distro looks ugly. Zorin OS should be the solution to all these frustrated Windows users who will be able to get the exact look and feel for free and with a better performance on the machines which could hardly run Windows 7. The best part is not mentioned yet. You can not only get the look of Windows 7 but also you can try all the looks like Windows XP, 2000, Vista, Mac OS X and even the original Linux GNOME look.

To use Zorin OS you do not have to be any pro Linux user or a geek. This free Linux operating system is designed similar to Windows 7 and there are many programs included in the package which will fulfill all your demands out of the box. This free Linux OS has all the media codecs pre-installed so that you can play anything with the media player though there is the almighty VLC player pre-installed with this OS.

There are also GIMP for photo editing, LibreOffice as office suite, OpenShot as video editor, Google Chrome as the browser and many more essential programs. Like any other established Linux variations this one also have a huge device support list. So forget about installing drivers and setting up for hours. This free Linux distro brings you the true plug n play experience for all of your devices. Besides, even if you face difficulties or problems, there is a vibrant community of helpful people who are ready to help you.

You can also try SplashTop OS, MojoPac and LiberKey reviewed by us.