A Thousand Words is a free screen capture tool for Windows, that lets you save screenshots for your screen. You can capture the full screen, a particular window, or a region of the screen. The inbuilt resize, drawing tools, magnifier etc., let you easily modify the captured image. This screen capture tool can automatically name the file to be saved, and supports JPEG, BMP and PNG format. You can also apply a delay while capturing the image from the screen.

The wizard with A Thousand Words, makes it simple for you to capture screenshots from your screen. 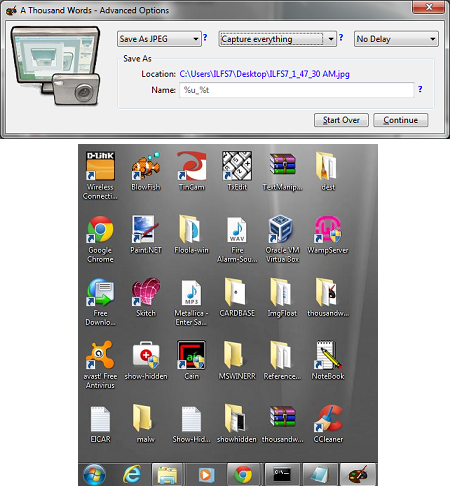 Ever thought about a screen capture tool with a wizard, to make things a lot simpler? A Thousand Words lets you capture screen but with a difference; it lets you perform the task with its wizard that helps you decide the format to save in, whether you want to edit it or other cool possibilities.

Because this tool is portable, you don’t have to worry about the installation process and setting up things before you can scrap the screen off and put it on to an image file.

Lets see how to use this screen capture tool. 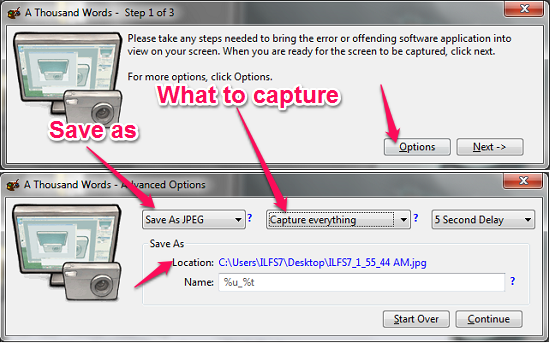 As we talked about this screen capture tool, it has got a step-by-step approach to capture the screen. If you click on the Options button, you can decide what to capture from the screen, what format you want to save it to and if there should be a delay before its captures the screen for you. 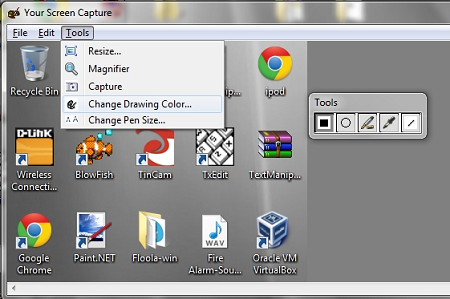 You can edit the captured image before finally saving it. You can draw shapes (rectangle or oval) on the image, use the pen to draw randomly, or insert a straight line on the image. You can also use the inbuilt resize tool to shrink or stretch the image, rotate it and use the magnifier to get a bigger view.

Now, you would not require a different tool to resize the image, or rotate it before saving it. Though, this will not be a complete replacement for other image editing tools (if you think so; after all, it’s a screen capture tool), however all your basic tools that you might need before you save the file are made available.

I used this screen capture tool with Windows 7 and I liked the simple interface, yet providing all what you need before you save a captured image. You can edit, resize and rotate the image that makes it even better. As it supports JPG, PNG, and BMP image formats, it gives you some flexibility while saving the image.

I would recommend this tool to anyone who’s looking for a free and portable screen capture tool.