MiniTwitter is a free twitter desktop client for Windows that lets you tweet and read tweets from others, right from your desktop. Once you authorize this Twitter Desktop client to access your Twitter account, you can receive live updates of tweets from people whom you’re following, get notification whenever someone sends you a direct message, and the best part is you would not have to type your username and password for your account. Just a click on MiniTwitter, and you’re in to your account. 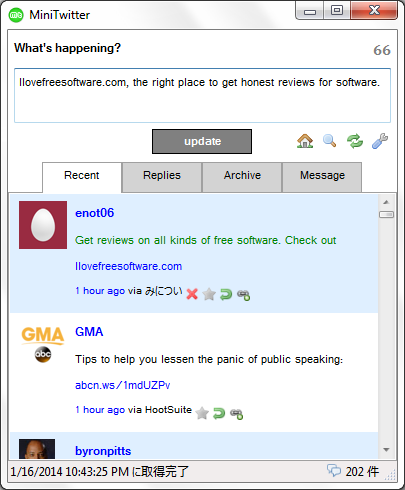 Wow, I gotta say that I have been waiting for someone to write an application as amazing as this one is. Now, I would not have to login in to the Twitter’s website to tweet. Just pop up this application and watch the live updates popping up on the Desktop. Now, my friends aren’t going to complain about me being late when it comes to replying.

Though this lightweight Twitter desktop client took my heart, I couldn’t figure out much to do with the interface; It’s in Japanese. And, I am not good with Japanese, but after a couple of minutes of careful observation, I was finally able to get it to work.

How to setup MiniTwitter, without learning Japanese? 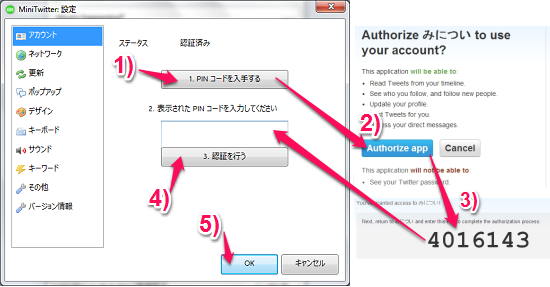 Now, you would not want to know how I figured out, how to setup MiniTwitter. “Just follow the number, read the good omens,” as said by the wise, I followed the numbers on the buttons and got this far with it.

All you have to do is the click on the button with “1. Pin and some Japanese characters”, which would take you to the Twitter website. Allow the Twitter Desktop Client to access your account, and Twitter will give you a Pin. This Pin should be used with MiniTwitter to authorize it. Once you type in the Pin to the blank text box, click on the Button that says “3. some more Japanese characters”. Once you’re done with all that, clicking on the “OK” button (that’s not Japanese by way), and you’re done with the setup. 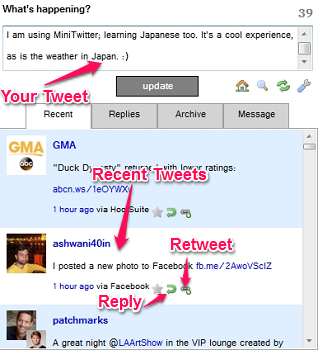 It was pretty easy from here. You can easily figure out what button is meant for what purpose. Just hover your mouse pointer over a button to know more about it (surprise, it’s in English). The white box on the top of the window would let you tweet, while the Recent tab below it, lets you know what’s cooking in your Twitter account. 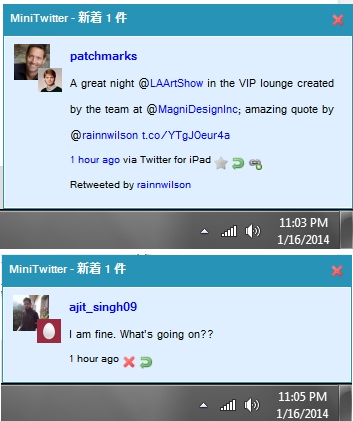 Another cool feature that I liked about MiniTwitter is that it lets you know what’s happening in your Twitter account, by giving you popup notifications.

You can also switch on the message tab to view your messages, but this Twitter desktop client, telling you everything proactively, makes it even better.

I tried this Twitter desktop client with Windows 7 and I love it (silently disregarding the Japanese part; I don’t understand it). I am a little hesitant to go to the settings part, but if you have someone who could translate them for you, then I would love to hear from you.

MiniTwitter is a wonderful application and you’re going to love it. Try it out.