This incremental backup feature is what differentiates ZPAQ from other backup solutions. It essentially means that instead of adding all the files to every new backup again and again, ZPAQ only adds those files that have changed since the last backup.

A perfect use of this software is when you keep your backup in an archive format on your PC or some external hard drive. In that case, using this software, you can add just the changed files to the existing zip backup file.

This can make a world of difference when you have to backup up large amounts of data. ZPAQ supports journaling, and both old and new versions of your files are backed up. ZPAQ supports multi part backups and can encrypt backups as well.

Sounds like something you can use? Let’s find out more.

One of the important things to note before proceeding forward here is that to use ZPAQ, you need to have a basic grasp over how things work in command line mode. That’s because ZPAQ has no such thing as a “user interface”. Every single operation that you can do in ZPAQ is performed by typing in commands at that blinking cursor on a Black screen (unless, you have changed color of command line). However, contrary to what it might seem to be, it’s not really that difficult.

Installing ZPAQ to your computer is really easy. All you have to do is download lightweight (under 1 MB) installer from the homepage, and run it in command mode. To do so, simply open a command prompt (preferably with administrator privileges) and drag and drop the executable into the command prompt window. 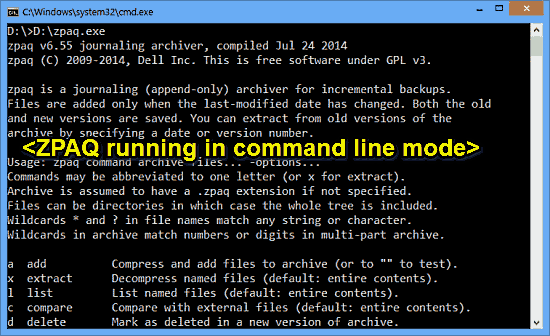 The command prompt window illustrated above shows all of ZPAQ’s major options. Each of these can be directly used with standard commands to perform the functions indicated against them. You can also scroll down to find all the other options available with the application.

How To Use This Free Command Line Utility To Add Incremental Backups To Existing Zip Files?

As mentioned before, using ZPAQ effectively mandates that you have a basic knowledge of how things work in places where there are no fancy icons and mouse pointers. However, the following step by step tutorial should get you comfortable with (at least) the basics of this incremental backup utility in no time:

Step 1: Run ZPAQ by dragging and dropping its downloaded executable to the command prompt window. Once you do that and press Enter, ZPAQ should execute in command line mode, displaying all of the available options and associated general information.

Step 2 (Creating a Backup): Now, before we can update a backup incrementally, there needs to be a backup in the first place. To create a backup, enter a command as follows:

(assuming D:\zpaq is the path to your zpaq executable file).

What this command will do essentially is create a backup archive file called back3up.zpaq with the contents of the folder zpaqbackup and save it in D drive.

Pretty awesome, right? As illustrated by the above screenshot, the moment you press Enter, ZPAQ gets to work, and in mere seconds, creates a backup of all the files stored in the folder specified by you. The backup archive is created in the proprietary zpaq format, and is stored in the root drive.

Step 3 (Incrementally updating a Backup): The primary highlight feature of ZPAQ is the ability to update existing backups incrementally. This can come in really handy in certain situations, like when you have a folder of important files that you constantly add new stuff to. In such a case, backing up that folder incrementally using ZPAQ can save you a ton of time, as only the files added recently are added to the previous backup.

To illustrate this feature, refer to the previous step, detailing how to create a backup. Let’s assume that you updated the contents of the folder zpaqbackup with some new files, and now you want to update the backup we created (backup.zpaq) in the previous step with these new files.

Here’s how to do it.

Run the exact same command as before:

As illustrated by the above screenshot, once you press Enter, ZPAQ immediately updates the backup with the files newly added to the folder. If you examine the above annotated information lines in the screenshot, you can clearly see Adding 4.5… MB in 2 files (where 4.5 MB is the size of the newly added file), and value1  + value 2 = final value (in bytes). Both of these lines clearly indicate that the newly added file has been successfully added to the backup, and also display the new size of the updated backup file. That’s pretty much all that it takes (at the basic level) to use ZPAQ to create your backups and and update them incrementally. Command line isn’t really that hard now, amirite?

ZPAQ is a really useful free command line utility to add incremental backups to existing zips. It’s simple, fast, and works the way it’s supposed to. Although it does have a little bit of a learning curve because of the fact that it’s completely command line based, but once you get a hang of it, you find yourself creating incremental backups in no time. Add to it the huge list of commands that it supports for extra functionality, and ZPAQ becomes even better. If you’re looking for a different and efficient incremental backup utility, give ZPAQ a try. You’ll love it.