Here are 8 free online XML to XSD converter websites. Whenever you have to describe elements of an XML file and validate the XML file, you need XSD file, which is also known as XML Schema. In such cases, these online XML to XSD converters will come in handy. You can add XML data and then these websites will generate XML Schema or XSD data (containing XML elements). Some of these websites also come with the feature to upload XML file directly from PC. Thus, you don’t have to manually copy XML data and paste it on the website interface to get the output.

Apart from online XML to XSD conversion, you will find some other interesting features. For example, you can select the XSD design type (Russian Doll, Venetian Blind, or Salami Slice), convert XML to DTD, load an online XML file, edit input and output data, create a new XML file and convert it to XSD, etc.

So, let’s check these free online XML to XSD converters one by one. 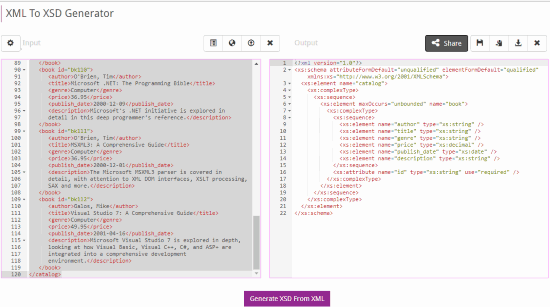 Code Amaze is my favorite XML to XSD converter website on this list. The reason is simple, it lets you preview input XML data and output XSD data side by side. Moreover, you can also edit input and output data before saving XSD file to PC. Another fantastic feature is you can also load URL of an online XML file and then generate XSD data from that URL. The website also lets you save the data online on its database but if you are not interested in keeping your XSD data online publicly, then simply download the XSD file to PC. 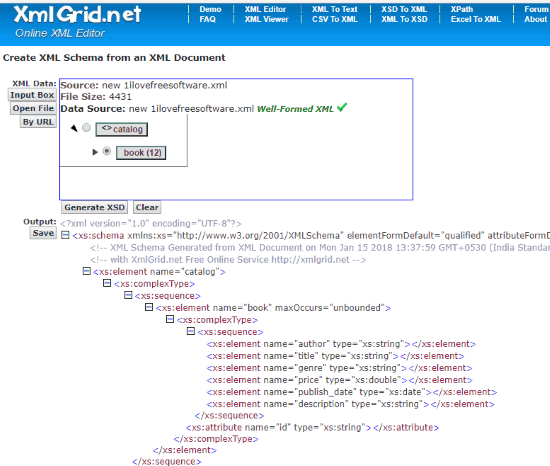 xmlGrid.net is one of the best options to convert XML to XSD online. It lets you convert an online XML file, upload XML from PC, or add a box to paste XML data manually. You can also view element data of input file if uploaded from PC. Select an option for input and then you can get the output data in XSD format. 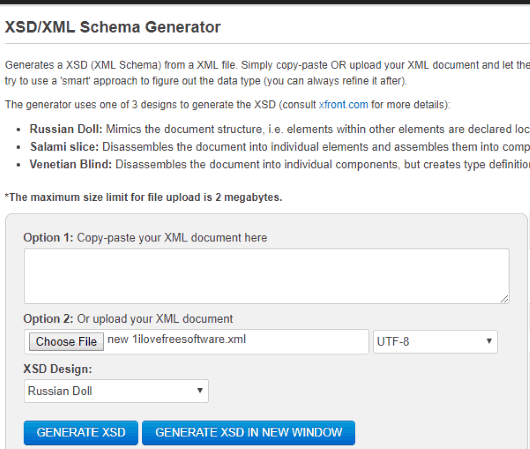 FreeFormatter.com is a very good option to convert XML to XSD online. It lets you upload XML file up to 2 MB and then you can get the output in XML Schema format (which is XSD). Here, the good thing is you can also copy and then paste XML code in the available box to generate the output.

One of its interesting features is you can set the XSD Design to get the output. There is Russian Doll (that mimics the structure of XML document), Salami slice (which extracts XML document to individual elements and then assembles all those elements as components), and Venetian Blind (disassemble the input XML document as individual components and then generates element types instead of element name and reference for output file) designs available to choose from. Additionally, it also provides the feature to select a particular character encoding (UTF-8, UTF-16, ISO-8859-1, etc.) for the output XSD file. Use available options and then you can generate XML Schema in a new tab or same tab. When the output is visible, you can copy it to the clipboard and then manually save it to PC as XSD format file. 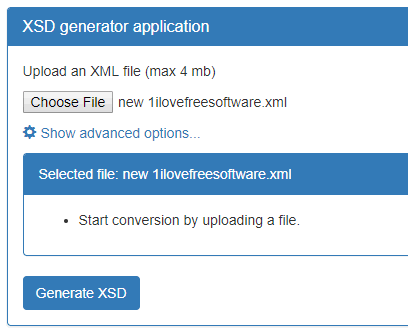 One unique feature comes with this website is you can also upload DTD file (Document type definition), which is helpful to define the structure of XML document including the list of legal attributes and elements in an XML file. You probably won’t need DTD file to get expected XSD output, still, the feature is good.

Once you have added XML file, simply click on Generate XSD button and you will get the XSD output in a zip file. This website doesn’t let you preview the input and output file data but the results come satisfactorily. Therefore, it is a handy online XML to XSD converter. 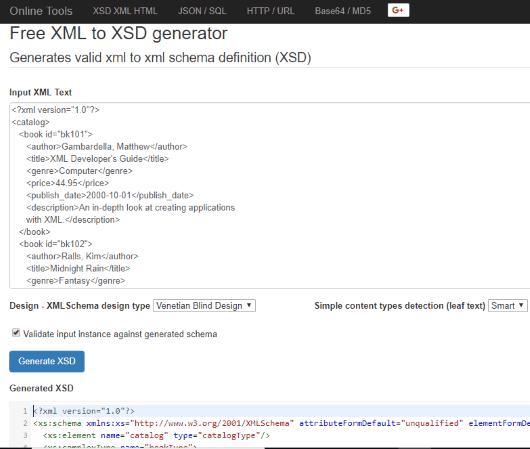 Dev Tools Online also provides a useful XML to XSD converter. You can’t upload an XML file directly but easily paste the XML data on the box available on its interface. Like FreeFormatter.com, it also lets you select the XML Schema design type: Salami slice, Russian Doll, or Venetian Blind.

The important feature available on this website is you can preview the input and output data and also edit input XML data and output XSD data. So, before saving the output to PC, you can do necessary changes.

Apart from this, it also shows enumeration values used in the XML data, which is not provided by other online XML to XSD converters. Other websites help to generate output with the element type and/or name available in input XML file but this website generates element type, element name, and element values also. These features make it a better online XML to XSD converter than many other websites. 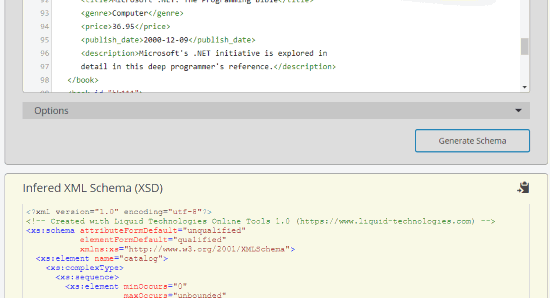 Free Online XML to XSD Converter (Homepage) is also a nice website. You can’t upload XML file directly but paste the XML data into the available box. Another good thing is it also shows if input data is valid. Moreover, you can also preview the input data. After adding the input data, you can generate XSD output in a single click. The output comes quite good with default settings but you can also customize some options to beautify the output code.

This website lets you indent character with tab or space, set indent depth (2, 3, 4, or any other value), indent attributes for XML schema, etc. The good thing is you are able to preview the output so you can play with options and check how the output looks. Finally, you can copy all the output data to clipboard and save it to PC. 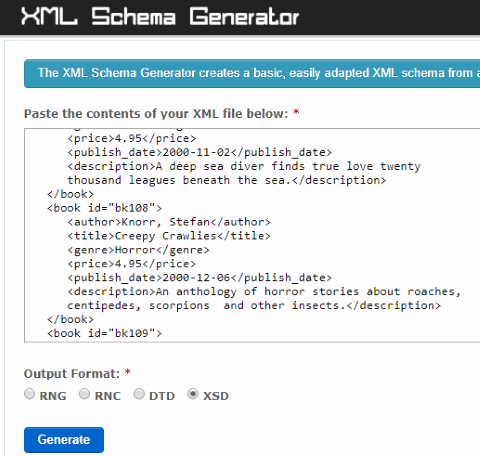 XML Schema Generator (Homepage) has one advantage over other XML to XSD converters present on this list. Apart from generating output in XSD format, it also lets you convert XML to DTD, XML to RNG, and XML to RNC. If you were looking for XML to any of these format converter website, then you should definitely give it a try.

You need to paste the XML file data into its interface and then select any of the available output formats. You can also edit the input data before that. Once you have done that, press Generate button. Finally, you can preview the output data and then download it to PC as XSD file. 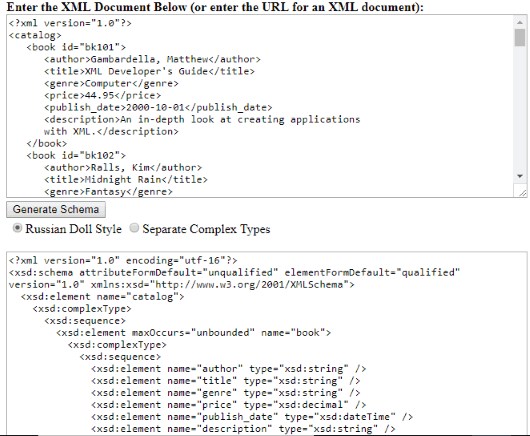 Xmlforasp.net comes with a very simple XML to XSD converter feature. But the features provided by this website are quite useful. You can add XML data and then select the XML Schema design type: Russian Doll or Separate Complex Types. After that, you can generate the output XML Schema. Before generating the output, you can also edit the input data. The feature to edit output XSD data is also available. When the final output is ready, you can copy XML Schema to the clipboard and then manually save it as XSD file.

If all such features are helpful to you, then this online XML to XSD converter is a nice option to try.

We have also reviewed best free XML to Excel converter software for you.

Generating XML Schema from the XML data is pretty easy and possible using all these websites. Therefore, all these online XML to XSD converter websites are good. Still, if I have to select only one website from this list, then I will recommend “Code Amaze” website. As I already mentioned, it gives features to preview and edit XML and XSD data, create a new XML file and generate XML Schema from that file, and load online XML file to convert it to XSD. So, based on these features, I prefer this website over other XML to XSD converters.