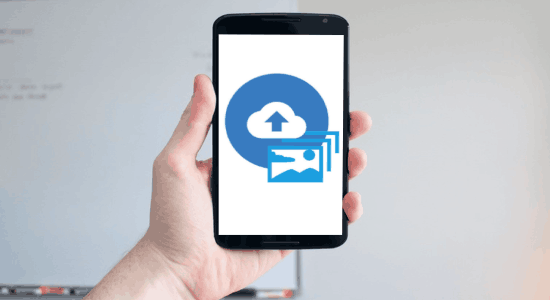 Now, let us get started with the Android photo storage apps to backup unlimited photos. 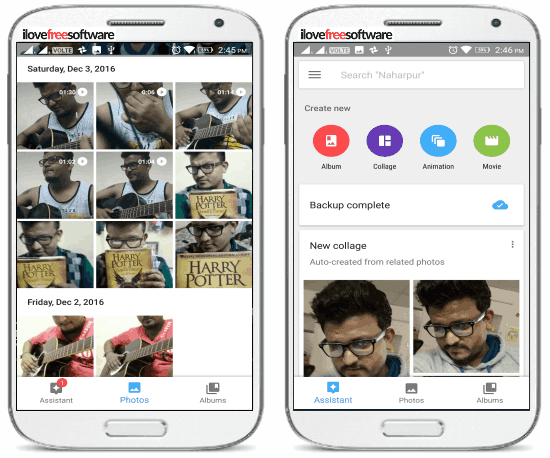 Google Photos is probably one of the best free Android photo storage apps to backup unlimited photos to the cloud. Using Google Photos, you can backup as many photos as you want from your phone storage to Google cloud without worrying about the storage limit. All the photos which you backup to Google Photos will be stored with the maximum resolution of 16 megapixels. The backup up photos are stored securely which you access from any Android device you want using the same Google credentials. You can even use the web app and desktop client of Google Photos to access and use your uploaded photos. In order to backup your photos to Google Photos, you can simply launch the app on your phone and then activate the “Backup & Sync” option. This will start backing up all your old and new photos from the photo gallery to Google Photos automatically.

It lets you backup unlimited high-quality photos, but for storing the original photos it limits the cloud storage to the total storage of your Google account. Once you’re done with backing up all your photos, you can delete those photos from your phone storage to free up space. Apart from backing up your photos, you can also backup your videos to Google Photos. The maximum resolution of videos which Google Photos can store on the cloud is 1080P. It also comes with some additional features using which you can edit the uploaded photos, create collages, panoramas, animations, and movies with the photos. 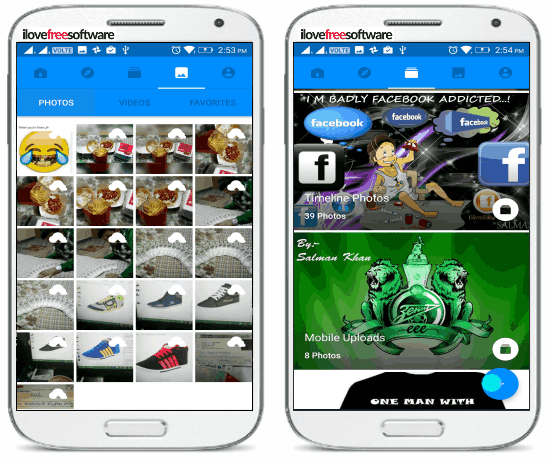 Ever is also one of the best free photo storage apps for Android which allows you to backup unlimited photos for free to the cloud. That means you can use this app and backup all your photos from phone storage to the cloud offered by Ever. Unlike Google Photos, it comes with a unique feature which lets you connect Flickr, Facebook, Instagram, Dropbox, Google Photos, iMessage, OneDrive, and Amazon and then backup photos from these services to Ever. The free version of Ever lets you backup as many photos as you want with high-resolution. But, in order to keep your photos with full-resolution on the cloud, you would need to buy the paid version of this app. The video backup feature is also included in the paid version of Ever.

After you backup all your photos to Ever, you can simply delete them from your phone storage in order to make room for storing more photos, videos, or other files. The feature of this app which I like most is it lets you backup and access all your photos which are scattered across cloud storage, social sites, and your phone gallery in one platform.

Ever is also available for iPhone and you can read more about it from here. 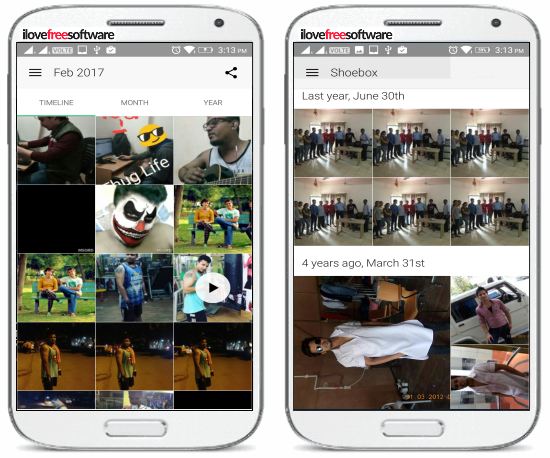 Shoebox is another useful photo backup app for Android which can be used to upload and backup unlimited photos from phone storage to cloud. All the photos which you backup to Shoebox are stored securely with bank-level security. Shoebox lets you backup unlimited photos to its cloud server and then helps you free up phone storage by deleting the photos. That means to free up phone storage you don’t have to lose your precious photos anymore. After you upload your photos to Shoebox, you can access them from any Android phone by using your Shoebox account in which you have backed up your photos.

To backup photos, you need to simply open up Shoebox and then define the folders from which you want to backup photos under the “Sync” settings. As soon as you do that, it will automatically backup all the photos residing inside the assigned folders. You can also connect your Facebook account to keep your Facebook photos safely backed up to Shoebox cloud storage. In addition to backing up your photos to Shoebox, you can also backup videos to the cloud. However, the free version of Shoebox only allows you to upload videos of up to 15 minutes in length.

Shoebox also offers an iPhone version and to know more you can read the full review here. 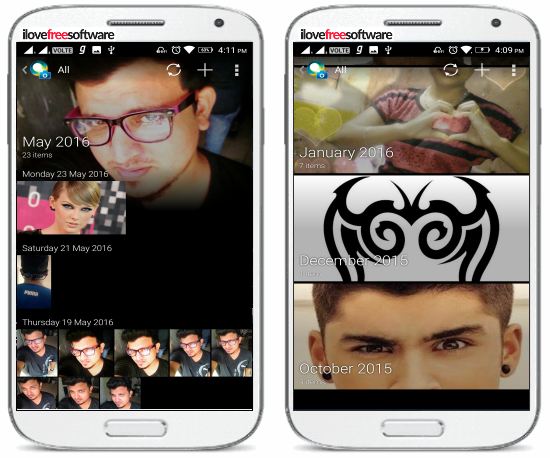 PlayMemories is a free Android photo storage app developed by Sony for unlimited backup of photos. Using this app, you can upload unlimited photos with high-resolution to the cloud from your phone storage. However, if you want to backup your photos with original resolution, then the cloud storage for that is limited to a maximum of 5GB. You can simply open up PlayMemories on your phone and enable the “All Sync” option to start uploading all your photos to the cloud. It doesn’t matter how many photos you have on your phone storage; you can backup all the photos to PlayMemories. When you’re done with photo backup, you can also delete the photos from phone storage such that you can free up more space on your phone for storing other stuff.

The backed up photos are privately stored in your account and you can share them with others if you want. One of the unique features of this app is that it lets you create an album and then invite other users to view and add photos to the album. Similar to Google Photos, this app also allows you to backup unlimited high-resolution videos but is limited to 5GB for full-resolution videos. 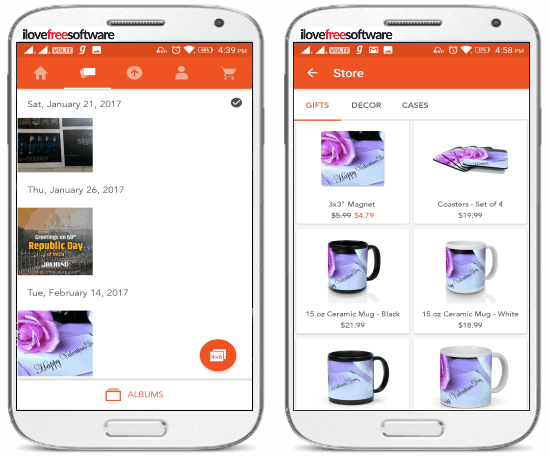 Shutterfly is actually a free Android app which can be used to print photos on gift cards, home decor, and mobile cases and then order them online. But, the Shutterfly app also offers unlimited cloud storage to backup photos for free. You can either manually backup your photos to the Shutterfly cloud or enable auto-upload. If you enable auto-upload then it will scan your entire phone storage and backup all the photos to the cloud. Similar to other Android apps explained in this post, this app also allows you to access your backed up photos from any device you want using your Shutterfly credentials. You can backup photos directly to the timeline or organize them into separate albums.

After uploading photos to Shutterfly, you can go ahead and delete them from your phone to free up storage. You don’t have to worry about the photos as they will remain safe and private in your Shutterfly account. The best thing about Shutterfly is that you can directly use your uploaded photos and then print them on gift cards, home decor, and mobile cases. The photo printing (4×6 and 4×4) is completely free, but you do have to pay for the gift cards, home decor, and mobile cases which you order.

Apart from all these unlimited photo storage apps for Android, Flickr can also be used to store a large number of photos to the cloud. 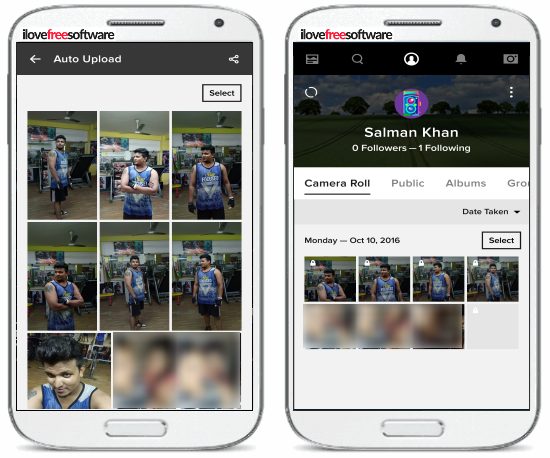 Flickr does not offer unlimited photo storage, but it offers 1000GB of free cloud storage to which you can backup your photos and videos. This storage space is too huge, and I would classify it as almost unlimited. It comes with a feature called “Auto-Uploadr” which helps you backup your photos to Flickr automatically. To start backing up your photos, all you got to do is open up Flickr and then go to “Profile” tab. After that, you need to turn ON the “Auto-Uploadr” option. As soon as you do that, it will start uploading all your photos and videos from phone storage to Flickr cloud. All the photos which you backup to Flickr are stored privately until you decide and make them public. Another interesting feature of Flickr is that it comes with a built-in camera using which you can directly take photos and store them on the Flickr cloud.

If you have been looking for a way to backup all your photos from Android phone storage to the cloud, then using these unlimited photo backup apps will be the best option for you. All of these apps (except Flickr as it is limited to 1000GB) offer unlimited cloud storage for backing up high-quality photos for free. Some of them even allow you to backup your videos.

Do try all these apps and let me know how they worked for you in the comments.