MPlayer is a free media and open source media player distributed under GNU General Public License. The program is available for most operating systems, including Linux and another of UNIX type, Syllable, Microsoft Windows and Mac OS X.

MPlayer supports a wide variety of media formats and as an extra thing it can save stream’s content into a file. MPlayer is an application that can run in command line and has graphical interfaces for the different operating systems. Its GUI (Graphical Interface)are gmplayer (interface used for GNU/Linux and Microsoft Windows), MPlayer OS X (for Mac OS X), MPUI (for Windows) and WIinMPLauncher (also for Windows). 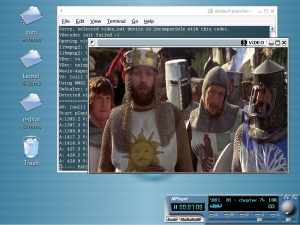 Thanks to MPlayer engine, it natively supports more than 192 video formats and 85 audio formats, thing that makes it a good alternative for BS.Player and Media Player. For maximum performances, this package is optimized for many types or CPU’s. When playing movies the program also gives you support for configuring the subtitles according to your language characteristics.