In the screenshot above, you can see that the list of printers is visible in the system tray of Windows 10.

How to Change Default Printer in Windows 10 from System Tray?

Step 1: First of all, get the zip file of this software and extract it. It is a portable software which doesn’t need the installation.

Step 2: Double-click on the CurrentPrinter exe file. It will start running in Windows 10 system tray.

Step 3: When you will hover mouse cursor on the software icon, it will show the default printer name. To change the default printer, right-click the tray icon, and you will see the list of available printers (as visible in the first image above). Just click on a particular printer. 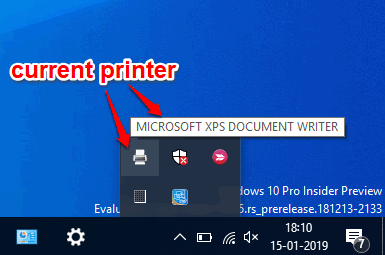 Tip: If you don’t use Microsoft Print to PDF feature, then you can also disable it without any third party tool. You can use this link to know how you can do that.

This is not the fastest way to change the default printer, but it is surely a faster and easier way. You just need to launch this software and then you can change default printer in Windows 10 from system tray with only two mouse clicks.