Song Engineer Lite the free music composition generator app for Android. It lets you specify verses along with sounds of instruments in an order, and then it generates a unique music for you that you can save. Basically it uses some intelligent algorithm to come up with a whole song and then you can work on it later to add some lyrics to it. You basically define the pattern of the song and the corresponding music instruments to use, and it will compose the rest of the music for you in a tap.

This app generates a MIDI file that you can later mix with the lyrics by singing them and then come up with a nice song. This app can save you a lot of time that you would have eventually spent in composing music from the scratch. However, this app does not claim to generate a fully functional song always, but the output is actually pretty nice.

You can keep changing the parameters like guitar chords, drums, harmony, and base to generate unique combination and preview it. After you have composed the music that you like, you can simply export it on the phone storage. This is as simple as that, and you can do all this in the lite version of the app. But if you want some more features than there is a pro version of the app as well. 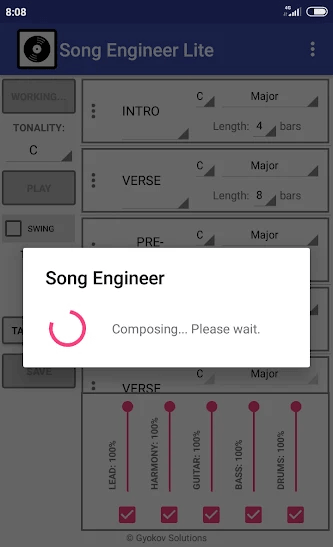 Just get this app from Google Play Store and install it. Next you open it up, and you will be on the main interface where it has come music composition for you already.

You can edit the parameters by simply choosing length and cord like parameters. Or, or you can even edit the entire element by tapping on the three dot icon on the left side. 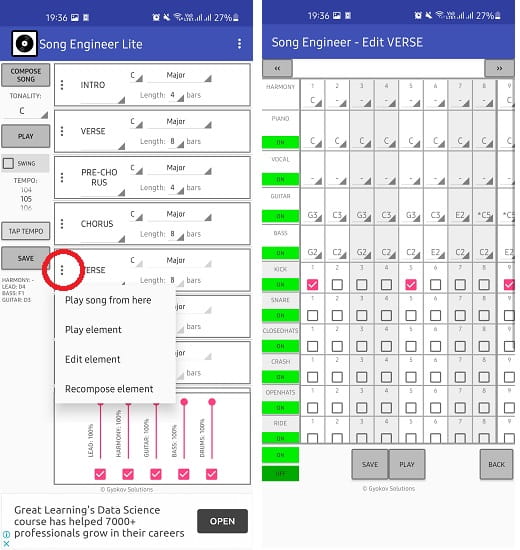 Each element can be edited in any way you want. And similarly, you can create a series of these elements(verses) by customizing sounds of the different instruments that it supports, and save changes. After the whole flow of the song has been composed, you can preview it using the PLAY button. And if you like the output, then you can simply save it as a MIDI file on the phone storage.

In this way, you can use this simple, powerful, and straight forward Android app to compose music automatically. Just adjust the music parameters according to your needs and let it do the heavy lifting. You can use it any number of times and compose any number of songs anytime.

If you are into music and have knowledge of the music instruments, then you will really like this App. Here you can select the instruments and their corresponding sounds for your music composition and let this app generate an entire song for you. They are really does what it says and I really liked the output it generates. So give it a try on your own and let me know what you think about it.