Oops! AppLock is an Android app to lock Android apps by volume keys pattern. That means you have to press volume keys in a specific pattern, like up-down-up-up to unlock an app. In addition to that, this app also makes it difficult for others to figure out that apps on your phone are locked. So, this is a perfect app to lock Android apps if you don’t want to use other App lockers which uses patterns or password to lock apps. It is a very simple and lightweight app by which you can lock all apps on your device like Whatsapp, Facebook, etc and also the system applications like Gallery, File Explorer, etc. 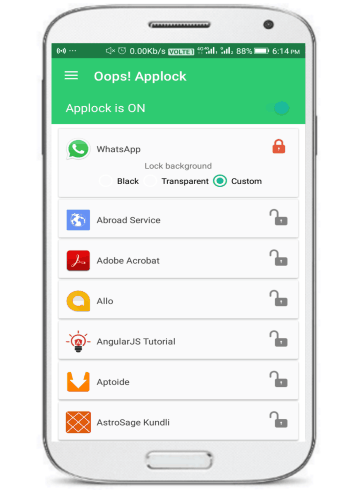 There are many other Android apps to lock apps, but what separates it from the crowd is its ability to keep things simple and use a method to lock Android apps by which most of the people wouldn’t be able to detect why can’t they open apps on your Android phone without even noticing that you are protecting them with an app locker. Personally, I use App Lock on my device to lock Android apps, but these types of apps allow you to unlock Android apps by a pattern. Locking Android apps by these types of app lockers is also secure, but in this case if someone watches you while unlocking apps they might get to know the unlocking pattern. However, some of the apps give you the option to make the patterns invisible. What I liked the most about this app is that it displays nothing on the unlock screen and someone who is trying to access the locked app will have no idea to unlock the app or what’s really going on in the background. You can set a pic from your gallery which gets displayed on the unlocking screen and you can unlock the app by pressing the volume key pattern.

Oops! AppLock comes with a very decisive interface as it is installed as a note taking application. It is installed with the name “K Note” and when you open it, you will see a note taking interface. You have to enter the volume lock pattern to bring forth its main screen from where you can lock apps. 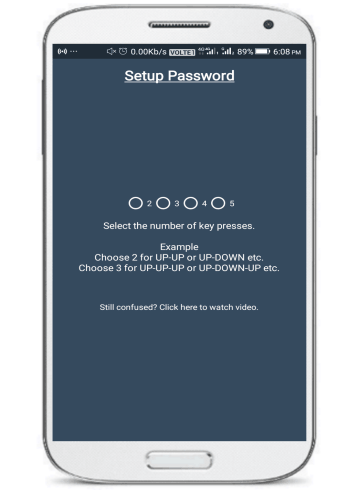 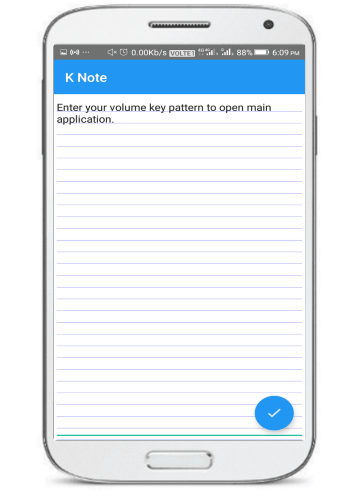 From its app locking screen, lock an app by tapping on the lock button. After that, the app will be locked by Oops! AppLock and you can only open it by pressing the correct sequence of the volume key buttons. You can also choose to change  the background of the unlocking screen that appears when you try to open a locked application. You can choose a photo from the gallery or keep the background transparent or black. 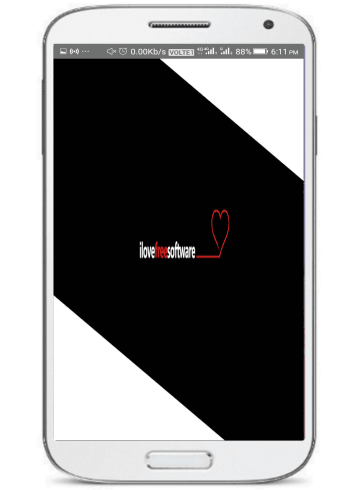 The screenshot above shows the unlocking screen when you try to open a locked app,  I have configured it to display a photo from my gallery. As I mentioned, it doesn’t display anything on its unlocking screen and you have to hit the right volume key button sequence to unlock it.

Oops! AppLock is a fantastic app locker for Android. It is very hard to spot unless you already know about it. The idea to lock Android apps by volume keys is quite unique and efficient too. Check out this free Android app if you are bored by locking apps by pins or passwords.