VBRhapsody is a freeware to edit music notes and  to create music compositions. Music notation editors and music composition software generally cost a considerable amount and those who need one such software for free can go for VBRhapsody.

This free music notes editing software enables customizing MIDI setup. Apart from this, Changing the Music Dynamics map, setting staves, adding effects etc., are some of the additional features that are significant from a music composer’s perspective. The functioning of VBRhapsody freeware is analogous to that of a Word Processing software. 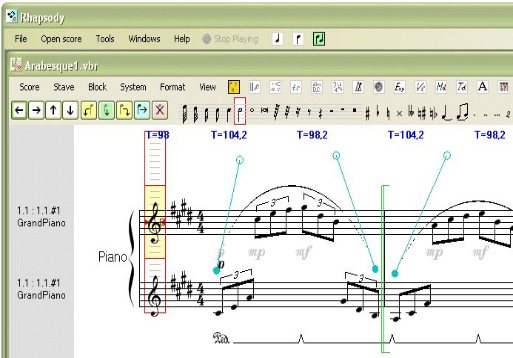 The current version of VBRhapsody freeware for personal computers is written in VB.net and it sizes just about 2.5 MB. VBRhapsody can run on various Windows operating Systems such as WIN 98,2000 and XP.

The primary functions of this free music notes editor can be listed as:

With the help of VBRhapsody music composing freeware the user can:

VBRhapsody is an easy way to edit music scores, and create new music scores. This is one of the simplest free music notes editor that we have come across. Do check out free youtube DJ software as well.