Here is a free software that provides floating windows for real-time CPU, RAM, and Disk usage. This software is named as “myResources“. You can bring a separate floating window to monitor CPU usage, disk usage, and RAM usage. Apart from that, it also lets you check internet or data usage in a separate window. Each window shows a beautiful graph to see the usage (in percentage) in real-time. If you want, you can also see CPU, data, RAM, and disk usage in a single window. Still, I believe using separate floating windows to check RAM, CPU, and disk usage is better.

Although Windows 10 also provides real-time usage graphs in Task Manager, you need to keep open Task Manager. This software on the other hand is better as it sits in the system tray and lets you open floating windows when you want. The floating windows remain on the top of other opened windows. So this can also come in handy when you want to monitor disk, CPU, and RAM usage after launching a particular application.

In the recording above, you can see floating windows for disk, CPU, and RAM usage in real-time. You can also arrange RAM, disk, and CPU usage windows horizontally and vertically or move them to any position.

How To Show Floating Windows for Real-Time CPU, RAM, and Disk Usage?

Step 1: Get the portable EXE of this software and launch it.

Step 2: The software will start running in the system tray and its panel will be visible on the desktop screen. The panel shows three letters: D, C, and M which are associated with disk, CPU, and RAM. The background of these letters changes to orange (medium usage), red (high usage), and green, depending on the usage. Now simply click on any letter and you will see a floating window. That window will provide the usage in real-time. 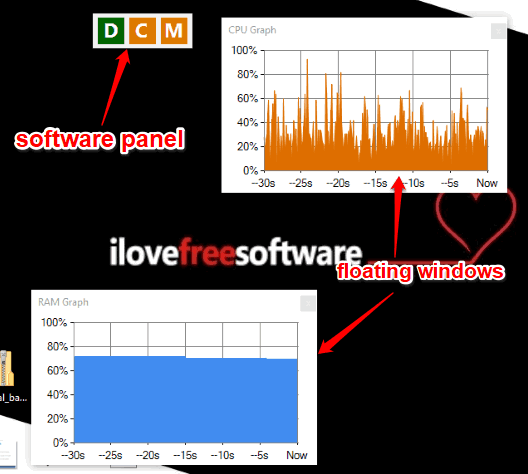 You can move that window anywhere on the desktop screen as well as resize it.

Step 3: To hide panel and to show net usage, you can right click on panel to access options. There you will see options to: 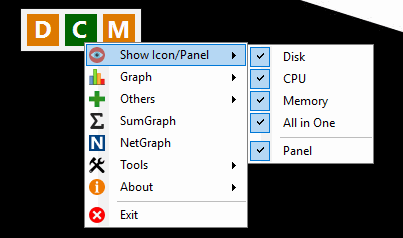 Step 4: When software panel is closed and you have also closed floating windows but want to open them again, simply right-click on the system tray icon of this software. After that, you will see all the options. 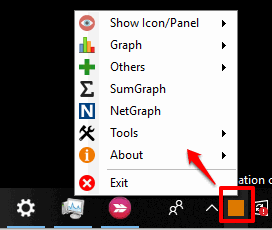 If you want to see the disk, CPU, RAM, and net usage in a single window, then simply click its tray icon.

It will show the graph for all of them in a single window.

There are many other RAM usage monitors (here) and CPU usage monitors (check this list) available, but this software is a bit unique. The floating windows to show real-time CPU, disk, and RAM usage makes it interesting. Also, you can easily resize those windows as well as check data usage in real-time which is another great thing.