Indeed Okozo Desktop offers a stunning range of interactive animated desktop backgrounds. Some of the functions include the ability to respond to movements of the cursor and display computer calendars and clocks. Users can also view content downloaded from the Internet. Alike other animated wallpaper programs, this free easy-to-use application uses little of the computer’s resources; this is to say, memory and CPU usage is minimal. 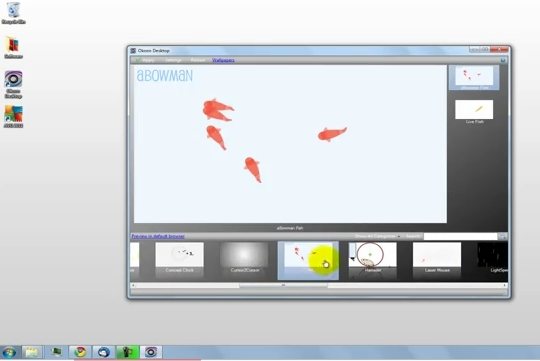 Okozo desktop displays its own  “Okozo” formatted animations and does not use any SWF files. If, in the event, users wish to add SWF files, users can submit the files for conversion on Okozo website. To have files converted, users need to visit the Okozo website and follow the simple conversion instructions.

As mentioned above, Okozo Desktop animation wallpapers are completely different from other animate wallpapers available. Okozo animated wallpapers use little hard drive, little CPU power and don’t overload the computer’s memory. The fact that other animations are able to be converted, is a major plus for this free application.

Okozo also takes advantage of Adobe’s ActionScript 2 & 3. The creator of this free wallpaper animation application, made extensive used of the ‘flash’ tools that Adobe is continually making available to flash programmers around the world. It was access to these tools that aided in the creation of Okozo. Many of the other makers of wallpaper animation programs, appear not to take advantage of Adobe’s “toolbox”.

If you are looking for a free desktop wallpaper animation software that will bring a little eye-candy to your desktop, this Okozo Desktop has some amazing animated wallpaper designs that are guaranteed bring a little enjoyment to a user’s Windows screen. The above functions of being able to have animation respond to movements of the cursor or being able to display the computer’s clock and calendar, are not only “cute” but also useful. Download Okozo Desktop here. [via]