Spell Up is an amazing free word game from Google that helps you improve your English. It’s like a virtual version of Spelling Bee, and works using voice recognition, though it can be played using the keyboard as well. Spell Up basically involves spelling out words, one alphabet at a time. Each correctly spelt word is used to create a tower of words, which keeps on getting higher based on how many words you spell correctly. One mistake, and the entire tower comes down. Just like any other game, Spell Up has different difficulty levels, which dictate the complexity of words you’re required to spell out to build the tower. Spell Up can be played on Google Chrome, and is also available on iOS and Android devices. All set to have fun already? Keep reading to find out more. 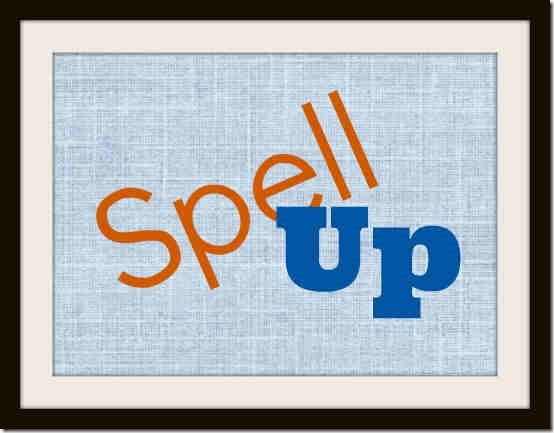 As I mentioned in the beginning of the article, Spell Up can be played in Google Chrome browser, on desktops as well as on iOS and Android devices. All you have to do to access the game is go to its homepage. Here’s what the primary interface of Spell Up looks like: 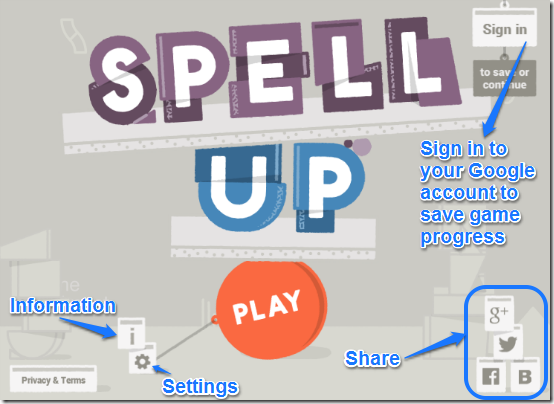 As evinced by the above screenshot, Spell Up features a pretty simplistic UI. The top right corner lets you sign-in to your Google account. Although Spell Up can be played without logging in just fine, you need to log in if you want to save your game progress. The bottom right corner features shortcuts to share the game on popular social networks, while the bottom left has shortcuts for general game information and settings, where you can change options like voice settings, keyboard controls etc..

How to play Spell Up?

Note: Although Spell Up can be played using keyboard just fine, a pair of headphones with mic is strongly recommended, as the game features aural instructions and works best with voice commands*.

Step 1: Click Play on the main screen to start up a new game of Spell Up. After initial loading, the game checks (and detects) your audio hardware, and finally fires up a basic game (Level 0) to make you acquainted with the gameplay.

Step 2.1: The voice instructions tell you to spell a simple word. You can either click the microphone button and speak up the word, one alphabet at a time, or use your keyboard to enter it (You need to press the microphone button every time after entering an alphabet to hear the next one). Check out the screenshot below: 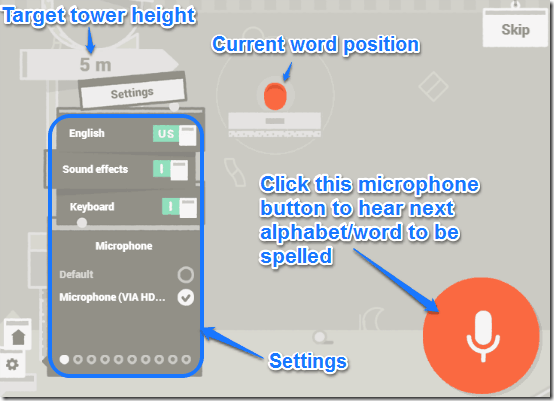 Step 2.2: Once each alphabet in the word has been spelled out (through keyboard or by speaking in to the mic), your word is added to the tower, signifying the completion of a stage. To complete the level (and thus the tutorial game to advance to the main game), you need to build the tower to the specified height (5 m in this case, as illustrated by the above screenshot) by successively spelling out words. Here’s a sample animated graphic, showing a little gameplay:

Step 3: After completing Level 0, you’re required to choose your English skill level to start the main game. You can choose between three levels: Beginner, Intermediate and Advanced, and your chosen level determines the complexity of words that’ll be presented for you to spell out to build your tower. The game UI also changes a little bit after Level 0. Other items like bonuses, gold coins, power-ups etc. also come into play (pun intended) after Level 0. The game also features different variations after Level 0 (For example, you may be required to spell out the missing alphabets in a word instead of spelling out the entire word). Here’s a screenshot:

As illustrated by the above screenshot, there are also power ups available after Level 0, to help you during the game at times when you’re stuck. These power ups do things like spelling out the entire word, letting you know the total alphabets in a word etc. Obviously, these are limited in number, and you need to keep advancing in the game to replenish them regularly. Apart from power ups, you also earn virtual gold coins for different achievements (for ex. spelling multiple complex words correctly in a row). You can view all your achievements by clicking the trophy icon in the top right corner.

There are also some small icons around the microphone icon to help you play the game. You can use these to hear the meaning of the words, pronunciation of individual alphabets etc.

In addition to the regular game of spelling out the words, there are also some random variations. For example, you might be asked to guess a mystery word with a limited number of guesses available, or as illustrated in the above screenshot, guess only a few missing words. But the gameplay remains the same across all variations. All in all, Spell Up manages to keep you engrossed while staying simple and fun at the same time.

Spell Up is a great tool that helps people get better at English from the ground level, in a fun filled and interactive way. The game is quite simple, but features enough goodies to keep you interested. Although the non playability on browsers other than Chrome is a bit of a bummer, but not a big problem. And something tells me that its major target audience, i.e. kids are going to love it even more, considering it mixes learning with play. Overall, Spell Up is good enough to keep not just kids, but everyone busy for a while. I suggest you give it a try, you’ll see that building towers with spoken words can be quite a lot of fun.