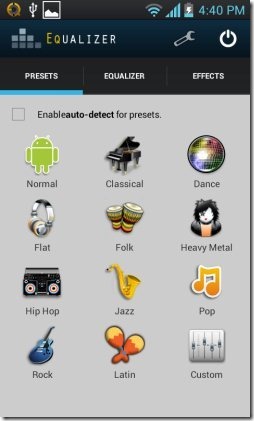 Android Equalizer app provides an intuitive user interface to make your sound output better in an easy way. The good part of the app is that it allows other music players for Android to use  the Equalizer set. If you are playing music on any Android music player and that player is supported by the app, then the set preset will also work with music player giving your desired sound output. For doing this, the Equalizer app should be enabled in the background.

As per the app description, the preset auto-detection feature of the app does not work with any third part music player on your Android. However, as per the demand, the developers of the app has started adding support to the new Android music players. Below are all the music players for Android which are supported by Equalizer app till now:

How To Use Android Equalizer App?

Launch the app and then select equalizer tab. You will see a file like icon to import a song from your music gallery. Tap on the icon and then select a song which you want to play. Now tap on the play/pause button to start playing the song on your Android phone. Go to the presets tab and then select the preset in which you like sound output the most. You can also adjust the equalizer, if you want more adjustment in the sound output. If you want to adjust the Bass booster and virtualizer, then go to the effects tab of the app and adjust the intensity as per your wish.

Multiple sound adjusting options: The app allows you to select from different presets of your choice. If you want, you can easily adjust the sound effect in a more advanced way by adjusting the equalizer. Add the extra effects apart from selecting presets and adjusting equalizer.

Inbuilt music player: You can even play the music with the inbuilt player in the app. You can select any song from your music library and play directly from the app.

To play the music folder wise on Android, you can download Music Folder player app for Android.

Click here to download and install Equalizer app from Google Play Store. You can get the direct download link of the app by scanning the QR Code below. 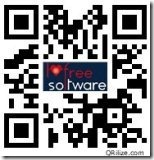 Equalizer app modifies sound effects on your Android phone and lets you listen music with a more improved sound output. You can now play your own DJ at your home by adjusting the sound quality accordingly.