Pandora FMS is a free, open source system monitoring software. This system monitoring freeware can be used to monitor and find performance statistics of the system when various processes are running on it. FMS stands for Flexible Monitoring System and Pandora is one such system which comes loaded with features to perform system monitoring  .

Pandora FMS monitors and analyzes the functioning of Hardware, software , various user and system processes, applications and the working of the Operating system as well. This is done with the help of the software agent that is on Pandora FMS .This software agent installed on the machine runs system mining commands that are used to extract various statistics about the performance of the system.

Pandora FMS is a open source multi platform application, that can be customized by the user, easily. This freeware can be used to send notifications about various happenings in the Operating system like  when a new system joins the network, an application or a process crashes while running etc. 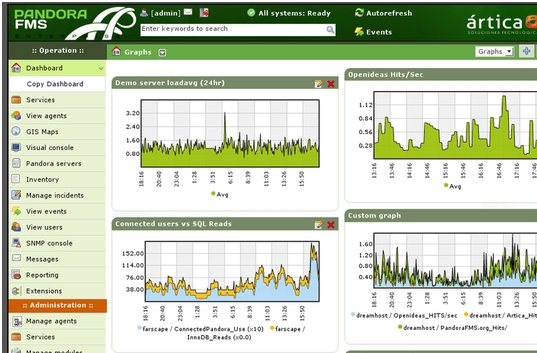 Pandora FMS is available for download in various formats. It can be downloaded as an image (.iso) file, tar ball for Linux or as an Installer (.exe) for Windows. All links for download are available on sourceforge.net and this freeware can be installed and run on various operating systems like Linux, Windows, Solaris, HP-UX and AIX , and the installer file for each of these is available.

The minimum hardware requirements of Pandora FMS are:

It can run on various versions of Operating systems like, Windows 7, Vista, Xp, 2000 and 2003, various flavors of Linux like, Ubuntu, Debian, OpenSuse etc.

Pandora FMS can detect changes in the network. This freeware can indicate a new system in the network. It is also capable of monitoring changes in system configurations, checks for the availability of the system, and raises alerts when something goes wrong.

Pandora  FMS has an intuitive interface that is highly responsive. The entire software has a scalable and modular architecture. It can support up to 2500 modules per server. The freeware has an integrated incident manager that can be triggered based on the occurrence of specific events. Further the user can also create custom alerts for the events. It allows the user to get data into the systems apart from allowing the user to get data from the system using Network probes.

Being a system monitoring software, Pandora FMS has to handle a lot of data, which it does very effectively. This is done with the help of tools that provide a statistical analysis of the system data which will help the user gain a more clear understanding about the system performance. Pandora FMS is capable of generating real-time reports of the data it collects, in the form of Line Graphs, Pictorial representations etc.,for each module. Further Pandora FMS is capable of storing real-time data for months, that can be used anytime later.

Additionally the user can also create his own graphs and customized representation schemes for a better interpretation of system specific statistical data.

Customization and other options

Pandora FMS allows the user to have multiple profiles. And it supports multi-user, multi-group usage and Provides a granular access to different users, apart from providing customized themes for different users and user groups. Profiles can be personalized using as many as 8 different security features.

All these features and options make Pandora FMS a One-stop solution to monitor the system and generate statistical reports for system performance data.