In this article, you will read about a free website where you can create ballad lyrics and song for free, Balled Lyrics Generator.

Song Lyrics Generator is a free tool, provided by Masterpiece Generator, where you can generate plenty of songs of different genres. One of the genre that you can generate songs of is Ballad song. Among number of types of songs, this type is an old-fashioned one. Moreover, the style of the Ballad song in this Song Lyric Generator tool is kept intact.

Ballad is a type of narrative song. It is a type of song that narrates a story of a person or an event related to a person in a lyrical way. Similar to the Villanelle poems, this type of song is said to be derived from French Ballade that can be interpreted as “dance songs”. These types of songs were created mostly from a very popular poems of a time.

Creating a Ballad song is much of an effort when you want to synchronize the words of the story to make it in the form of a song. Ballads are fun to sing, but only when there is already a story written in a lyrical way. Mostly, Ballads were taken from the famous poetry already present among people. However, if you have an idea to tell to someone, and want to convey it in the form of a song, you can try this Song Lyrics Generator to generate the Ballad of your choice.

You can try this Ballad generator by typing in the words in the provided space in the webpage, including noun, person, adjectives, and other mentioned information, that will help in creating a Ballad.

Carefully choose the words that you input, to make sure that the words connected in some way or the another. The unconnected words may create a funny Ballad, and you can try that too!

Once you have chosen the words, type in the “pen” name that you want to show below the song and hit the “Write me Ballad” tab and the website will generate the Ballad in just few seconds. 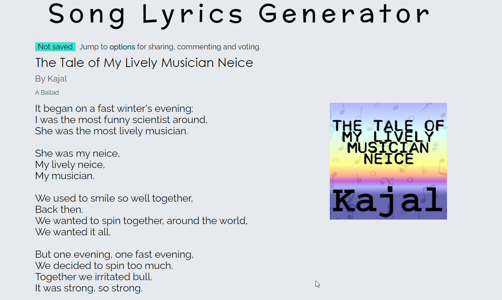 The Ballad will be ready in a matter of few seconds. Read it out and if you are unsatisfied with it, you can hit refresh below the song until you find the perfect song lyrics.

If you are satisfied with the song lyrics, you can now share the lyrics to your friends by copying the song, or you can also publish the song under your pen name in this website as well.

Song Lyric Generator is similar to the Poem Generator (for Villanelle poems), provided by Masterpiece Generator, where you can create Ballad songs in just few seconds.