Here are 5 free CSV to JSON converter for Windows. These software use precise algorithms to convert a CSV file and output the corresponding equivalent JSON file. Some of these software are very advanced and can also change a CSV to various types of JSON files including, JSON-Dictionary, JSON-Row Array, JSON-Column Array, etc. In the following list, I have included some command line CSV to JSON converter and also some HTML files also to do the same.

Also, most of these software provide flexibility to define your own delimiter, so if your CSV file is not comma separated, but has some other delimiter, you can specify that too. 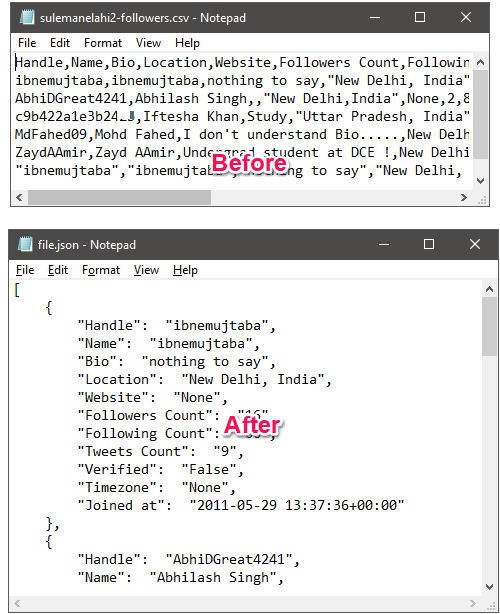 JSONedit is a very nice CSV to JSON converter that I came across. It uses a very straightforward method to convert CSV file to JSON file. It can show you three views of the imported file in JSON format. Using this free software, you can see the CSV file in the form of tree, text, and list. The software is very intelligent to organize the CSV data in the form of roots and nodes. Before exporting the file, you can also change the CSV data as it a good CSV editor as well. And you can also use this software to convert TSV to JSON. For that, you will only have to change the field delimiter. 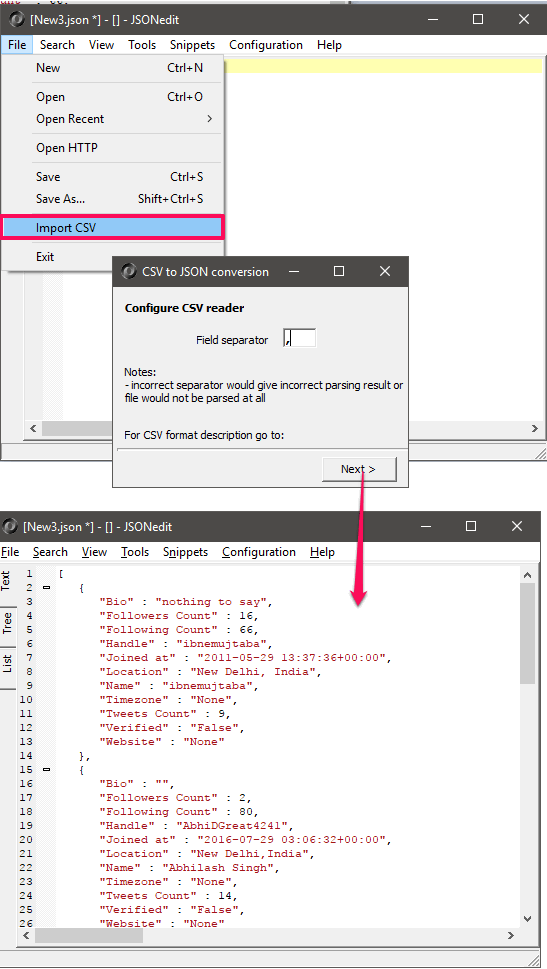 JSONedit can very easily create a JSON file from a CSV. You can start with it by getting its setup from the above URL. And when you have downloaded it, then install it and run the application. The interface of the software is very simple and it will not be very difficult to use it. So, first import a CSV file using the File–> Import CSV option. After that, a dialog will open up and ask you to specify the delimiter that your CSV file has. By default, the comma is used a delimiter, but you can change it to any other based on your CSV file. Next, it will show your CSV file in JSON format. Then you can convert it to JSON file by simply saving it as JSON file. Use the file menu to save it as a JSON file.

Mr Data Converter is quite a different tool that you can use as a CSV to JSON converter. Actually, it is in the form of HTML page that you can open in your browser. It uses several scripts to do the CSV to JSON conversion. And it has a very intuitive interface to do the same. More importantly, this tool is actually more than just a pretty face. It is a very powerful one as well, because it lets you generate various types of JSON files from input CSV data. It can generate JSON dictionary, JSON properties, JSON Row array, JSON column array, very easily. All you have to do is just paste the CSV data in one of its pane and get the equivalent JSON format of the data in another. Also, an online version of Mr Data Converter is available here. 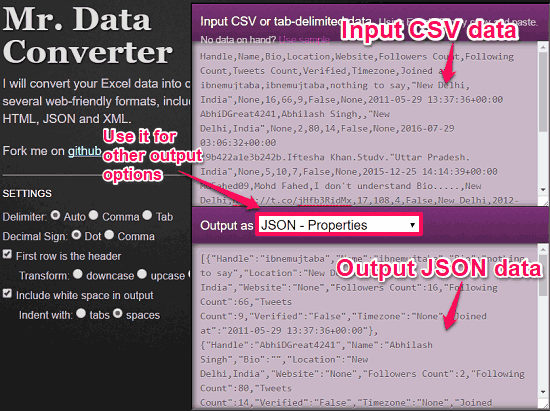 It’s very simple to convert a CSV file to JSON via Mr Data Converter. Download it using the above URL and then extract its downloaded archive. After that, double-click on its “index.html” file and it will open the browser. You will see two panes there. Paste the CSV data in the upper pane that you want to convert and then choose the type of JSON format you want using the Output as drop down. Next, the JSON data will be displayed and you can copy paste it to a file and save it as a JSON file.

DTM Text to JSON Converter is another CSV to JSON converter for Windows. Actually, the software is meant to convert all type of files to JSON which save the data in the form of plain text. And this is the feature of this software that I will use to convert CSV to JSON. You can import a CSV file in it and then specify the delimiter to fetch data from it. And after fetching the data, it will show you its equivalent JSON format. You can then save the current view of the JSON data to a file using this software. 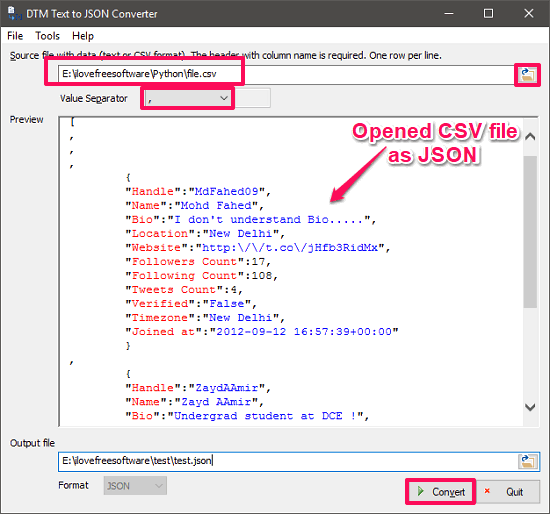 DTM Text to JSON Converter is a handy tool to convert CSV to JSON. Grab it from the above URL and install it. Next, run it and load it with a CSV file. Use the browse button to open a CSV file in it. After opening the file, specify the delimiter that it will use to create nodes and tree. Since we are dealing with CSV file so specify comma as the delimiter. After that, it will format the CSV data in JSON form and you can see that in the preview window of the software. Now, the JSON file has been processed, you can now specify the output path and hit the Convert button. Doing this will save the CSV file as JSON.

PowerShell is a very powerful tool of Windows that you can use to do various tasks. And I have found a PowerShell script that can convert a CSV file to JSON file. If you have a little knowledge of running PowerShell commands, then you will find this method very easy. All you have to is run a PowerShell script with the source file name.

Type the following command in the PowerShell window. 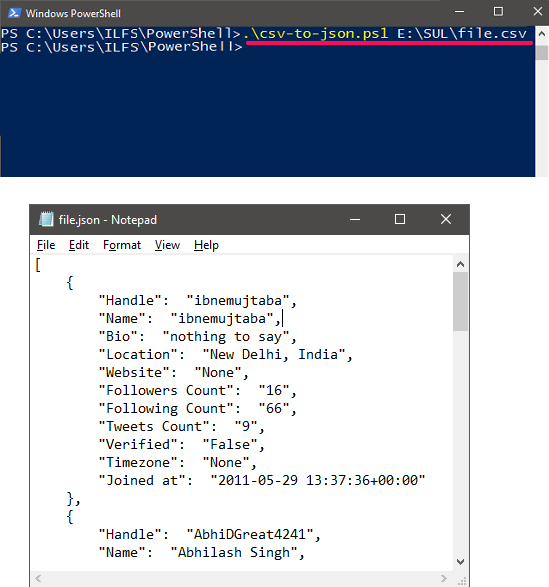 After running the above command A JSON file will be saved in the same directory where the input CSV file is. You can see the above screenshot.

Csv-Json is a Command line software to convert a CSV file to JSON file. And it is very similar to what I have explained in the case of PowerShell. The only difference is that it requires Python to be installed on your PC. It comes as a Python script that you can run using Command prompt and use CSV file name as command line argument. And the rest of the process is same as I have explained with PowerShell.

Download the Python script of Csv-Json from its homepage. After that, copy it to some directory on your PC. Next, open CMD there. And run the following command: 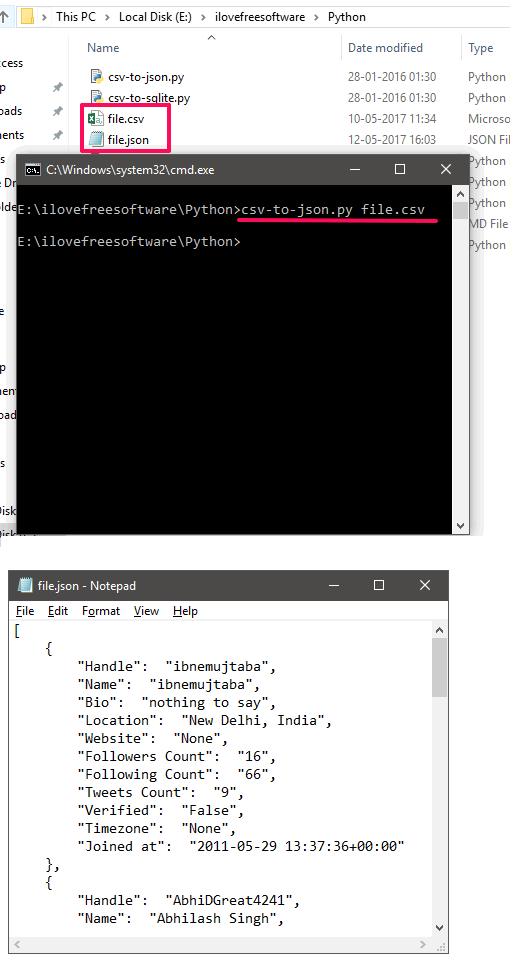 See the above screenshot of the Command prompt that I have used to convert a CSV file to JSON. For convenience, I have copied the input CSV file in the same folder where I have placed the Python script.

These are some very cool CSV to JSON converter software which I have found so far. All of these software can easily convert a CSV data to JSON data in just a few clicks. And if you don’t want to use any software, then simply use the PowerShell or Python scripts that I have included above.