“What is the difference between 32-bit and 64-bit Windows?”

This is probably the most common question that comes in our mind when we plan to buy a new system or read the system specifications required by the software or hardware we are going to install in our system.

We often encounter some 32-bit or 64-bit terms while dealing with the tech world; let it be the type of processor that comes with the system we buy, the applications that are being installed in our system, or the version of Operating System (Windows ) we are using. However, many of us don’t even know what are the differences between a 32-bit and a 64-bit system.

To help you understand the basic differences between these two, I am going to share my knowledge on this I have gained so far.

But before I start, I would like to make it clear that these are NOT the only differences between a 32-bit and 64-bit systems. In order to get the full-fledged knowledge, you need to go deep down into the technical details, which is not what I am going to discuss here.

My main aim is to make it clear to you what basic difference does a 32-bit and a 64-bit architecture makes to your system, in the simplest possible way I can.

Let’s have a look on this. 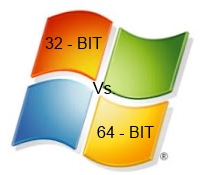 First of all, you need to understand that your whole system is divided into three parts: the Hardware, the Operating System, and the Application Programs.

The Hardware comprises of your Processor (CPU), Memory (RAM/ROM), and I/O devices. The Operating System, which is normally designated as “Windows”, is a collection of software that operates your system. And the application program is a set of instructions which tells the system what specific task it has to do and how to do it.

You might be aware of the fact that a computer reads all the instructions in form of 1’s and 0’s, which are commonly known as “Bits”. Now a 32-bit system and a 64-bit system generally refers to the kind of architecture adopted by the above-mentioned components in your system.

While doing my R&D, I came across a very good example, which helped me understand the whole scenario in a better way. And now, I am going to use the same example here.

Think of a 32-lane route and a 64-lane route. Which one will result in more traffic flow and less traffic congestion? Obviously the latter one. Same way, these two architectures operate; 64-bit system offers 2 times faster data accessibility than 32-bit systems, resulting in less bottlenecks and smoother data flow.

Now coming to the next point, a 32-bit system supports 3.24 GB of RAM while 64-bit system supports up to 16 EB (exabytes), which is virtually unlimited. When a system executes a process, it reads the data from the hard disk and keeps it on RAM from where it can be accessed easily and repetitively. Due to a smaller RAM, a 32-bit system stores less processes and hence it has to go back to the disk again and again and the whole system goes slow. Comparatively, a 64-bit system can store more processes at a time in its “virtually unlimited” RAM, hence it results in a better system performance.

Apart from that, the video card, motherboard BIOS, and other devices that are installed in your system take up the same RAM space, which further decreases the available RAM in a 32-bit system.

Another benefit that a 64-bit system provides is its capability to do scientific calculations faster, which further boost up the system performance.

But before you conclude that 64-bit system is best for you, just have a look on these important points:

Hence, do choose the version of Windows considering your needs for using the system.

Hope you like this article. If have more clarifications or suggestions, do let us  in comments.

Also, read our another tech post on IRC Client.