If you have heard the term IRC many times, but always used to wonder “What is IRC?“, this article should answer that. This article contains all the necessary information that you need to get started with IRC.

Whenever people come across this strange looking term “IRC“, their first reaction is: “what is irc?”. People who know little about it think that its dead but I would like to surprise them that’s its still very much alive and kicking.

To summarize quickly, IRC (Internet Relay Chat) is the internet’s first chat network. This came into being much before today’s instant chat messengers did. And it is still not dead; hundreds of thousands of people can be online on IRC chat networks at any point in time. There are thousands of Channels (chat rooms) which are still populated by thousands of people. 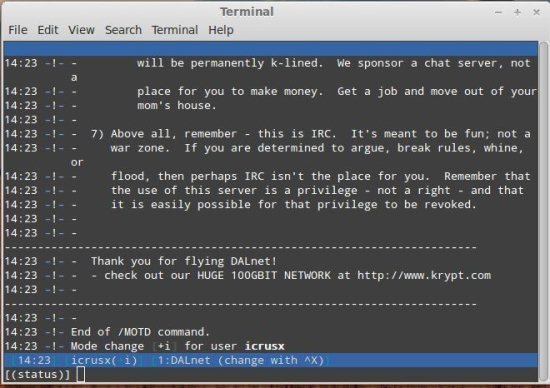 Yes, its has been replaced by host of other services and its has gone from being a common, mainstream application for online communication to somewhat unknown and a seldom used tool. But even after all these years of advancement it still remains active. This shows that this technology serves a specific purpose which for now cannot be replaced and most probably will continue to be operational in the decades to come.

What purpose does IRC hold in today’s world of social networking, instant messaging, push emails, chat networks, video calling etc.? To explain what is IRC?, we have to travel back a few decades to the birth of IRC. And see why is it still in use and is relevant even after so many advances in computing.

I think this article is gonna be quite long. So, I have added an Index of content so that you can quickly jump to any part. If you have no clue about IRC, I encourage you to go through the complete article. Get a cup of coffee, relax on your couch, and just be amazed by this amazing invention which probably ensured internet is as popular as it is today.

Internet Relay Chat ( IRC ) was born in August 1988 to replace Bulletin board system(BBS). The protocol was created in Finland by Jarkko Oikarinen. IRC was once the most popular method of online communication and is now replaced by other more modern ones.

IRC is a chat protocol that is used to power various chat networks. Chat networks powered by IRC are known as IRC themselves. Unlike chat networks like Yahoo Messenger or Facebook, IRC is highly decentralized in nature, and not controlled by a single company. Anyone can setup a IRC server on decade old hardware. And there are literally hundreds of IRC clients available for every possible platform (Windows, Mac, Linux, Android, iOS, web based, and much more).

Even though popularity of IRC has been dwindling, but still IRC holds relevance because most of software, hardware communities, and some forums (especially open source and hacking communities) use it for providing a sort of informal support of their products, discussing amongst themselves, and in general helping out the users.

With this part we have ended “What is IRC?”

Now that we know What is IRC, let’s dive a little into technical aspects about it. I won’t be going in too much detail. But would like to give enough information so that you have a good understanding about its architecture and know enough commands so that you can even work on an application that does not have a GUI. Feel free to refill your coffee cup.

IRC is a multichannel, multiuser, real time chatting system which uses a client – server architecture. It also offers the ability to transfer files from one user to the other. The chat rooms here are called Channels and one to one communication is called Private Messaging.

To use IRC services we require an IRC client software to connect to a IRC server. There are lots of graphical clients available for free but earlier you had a command line interface and used to manually type commands to perform any action. Anyway the commands still hold some use which I will explain in detail in a while.

There are thousands of servers which cater to different categories. The server part of the IRC is easy to implement and way easier to maintain. To find appropriate channel you can look through many different server-lists.

Best thing about Chatting on IRC is that you don’t have go through the process of registering etc., all you have to do is enter a channel and choose a nickname and you can start chatting.

These days all the IRC clients are GUI based and you can point and click your way through the interface. But there are some things which are done better and faster using commands. So here is quick guide to most of the basic commands that you might want to know as a client. However, it is possible to do everything without using any command. So, if you don’t want to bother yourself with technical jargon, feel free to jump this section.

The commands are to be entered in the text field where you would normally enter text to chat but with a forward slash prefixed for example ( /Command ). See screen shot below.

Connecting to a server:

Every server is known by a hostname. Lets take an example of DALnet its Hostname is irc.dal.net. Just type the /server followed by the Hostname.
Example:
/SERVER irc.dal.net
This would connect you to the Server.

Connecting to a channel:

Example:
/JOIN #MyIRC888
Because this channel does not exists it will be created and you will become its operator.

Getting list of names of people in a channel:

Other useful command is to use /whois followed by the name of the person who’s details you want to get.
Example:
/WHOIS fire88

If you want to change your nick name try the command below.

Now your nickname will be changed to “MyNewNickName”.
Setting your status to away and quitting:

Want you explain why you will be not available for a while type /away followed by your message .
Example:
/AWAY writing a long article on What is IRC, back in 15 days

When you get back just type /AWAY

There are two methods of quitting: quit and leave. Quitting will exit IRC, while leaving is meant for exiting for a channel.
To quit just type /quit followed by your message which is optional.
Example:
/QUIT Woo Hoo! Article done. Need to get drunk now!

To just leave a specific channel type /leave followed by the channel name .

To initiate a conversation with someone use /msg command .
Example:
let the persons nick name be Friend to whom you want to send a private message and interact with in this whole example.
/MSG Friend what’s sup ??
if you are using a GUI application (which most probably would be the case) then some of those would open a conversation window with other person, like most of the modern chat messengers do. These windows are known as a query window. Now to send a private message if query window did not open would become a cumbersome because you would have to type /msg again and again . Here is when /query command comes in. If you want to open up a separate query window then type /query followed by the persons nick name.
Example:
/QUERY friend hey, how is your day going .

Direct Client Communication(DDC):
If the server is having a problems and lagging etc., then you can bypass the IRC server and continue having a private chat with the person. For this you will need to use DDC command.
Example:
Start DDC:
/DDC CHAT friend
then you can send messages using the /msg command as shown above.
End DDC:
/DDC CLOSE CHAT friend

File Transfer on IRC:
To transfer a file we use the same DDC command but with different arguments.To start a transfer use /ddc send. Then the person will get a notification and if he accepts if then the transfer will occur.

Depending on the client he/she will get a notification. If it’s a GUI application then a dialog box will open up where he/she has to accept the file in order to get it. Else he will get a text saying that I have sent a file using DDC.

To accept is via command he/she has to type the following
/DDC GET yourNickname.

Use help command for further exploration. Just type /help will bring up a list of all the commands that can used are displayed in an alphabetically arranged order.

If you are interested in knowing about more commands (including commands for server operations and channel maintains etc.) then read this Article.
Want to setup your own IRC server then follow this amazing tutorial.

Now that we have got a good understanding of what is irc and how to use it. I would like to suggest the most popular free IRC clients for different platforms.

X-chat 2 is one of the most popular free IRC client application available for desktop. It has a really nice UI, it is a feature rich application and offers scripting too. This makes it a good client for beginners while experienced users can customize it through the use of plugins. Here everything can be can be handled via GUI. It handles multiple windows using tree interface which makes navigation a breeze. 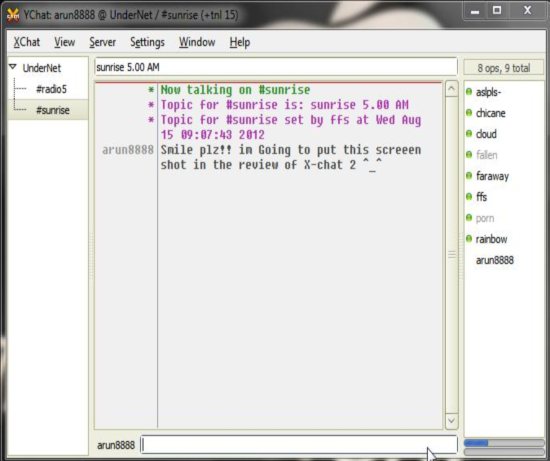 X-chat 2 supports multi server, multi channel, and dialog windows. Best thing about it is that its open source. X-chat 2 also offers a host of external downloadable plugins, which makes it highly customizable and configurable. X-chat 2 supports auto completion of commands and nicknames too.

Mac : XChat Azure is the same application, its compiled from the same source as Xchat is open source for Mac. Its available on the Mac app store and yes it remains free . Click here

AndChat is a free android app that offers lot of features. One thing that I like about it is the way it looks. It looks really retro with Black background and colored text. The dark themed simple UI makes it feels like you are using IRC in a terminal (Cool Right !!).

The app is light, fast, and responsive. It is available in the Android market. Now you can keep using IRC and stay connected while on the move. This app is the one of the best IRC clients for Android and best of all its free. To summarize, this Android client for IRC offers a huge list of features that will definitely impress anyone. If you are not interested in this kind of UI you can try AndroIRC. 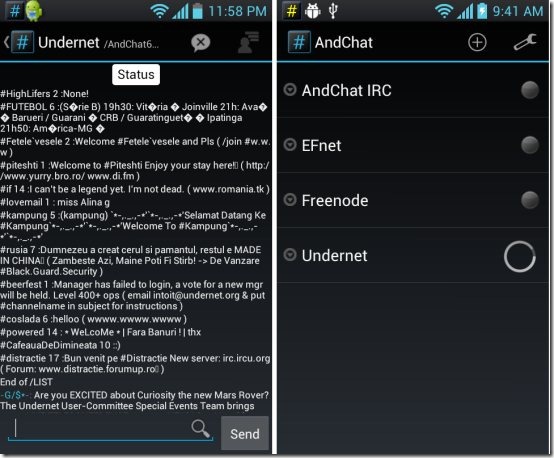 IRChon is the one of the most popular IRC clients available for iOS devices. It has a nice polished UI and it comes with all the standard features plus some really awesome ones like the links posted are clickable and can be opened in the internal browser so that you don’t have to switch apps to view a link. And best of all its free. It Requires iOS 2.2.1 or later so even your old ipod Touch will work with this.

Click here to download and install IRChon from App store. You can also scan the QR Code below from Barcode Scanner app to download the app directly from App Store.

So, that’s all the info I wanted to share about IRC. I hope I have satisfactorily answered the question what is IRC, and have also provided just enough information to get you started with it. To try it out, you can just use any IRCserver, setup your own channel, and then have a group chat with your friends; without worrying about which chat network they are originally on. If you have some thoughts to share on this, do let us know in comments section.