WorldGeo is a free Windows 10 geography app to learn about geographical position of countries on map, their flags, and learn about capitals. This is a totally fun app for kids to learn and improve their geography skills. You can start with choosing one continent and concentrate on that. You can move on to the next once you are confident that you have learned one continent and its countries properly.

You can download this Windows 10 geography app from the Windows 10 store. You can also download the app from the link given at the end of this article. When you start the app you will come across a interface as shown in the screenshot below. 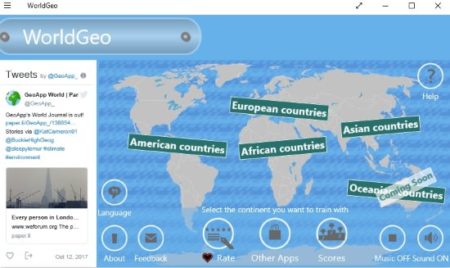 After selecting a continent you will see a screen like the one shown in the screenshot below. 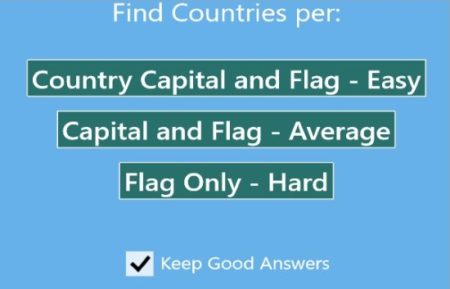 Easy Mode: You can play the easy one where you will be shown the flag, country name, and capital name. All you have to do is point out the location of the country on map.

Average Mode: In average mode you will be shown the flag and name of the capital, using which you will have to pin the location of that country on map.

I selected American Countries from the home screen and then selected the easy mode to start with. I was shown the map of the continent as shown below.

On top left of the screen you will be shown a flag and the name and capital of the country will be shown with the flag. Now you have to pin this country on the map shown below. You can zoom in on the map to mark the correct position. You have a pause button to pause the game and a timer is running to show you how much time you took to complete.

After answering a question the screen will move on to the next question in a few seconds. In case you answer wrong, then you will see a screen like the one shown in the screenshot below. 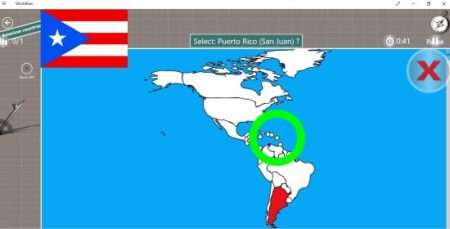 The wrong location you choose will be marked in red and the correct position of the country will be shown in green by the app.

Features of this Windows 10 geography app:

WorldGeo is a nice app to learn about countries and their location on a map. Additionally kids can also learn about flags and capitals of the countries. The app lets kids learn all about geography in a fun way. Children will enjoy pinning countries on a map. Do check this app out.

Check out WorldGeo for Windows 10 here.