This tutorial will show you how to record game replays of PUBG, Clash of Clans, etc. on Android. There is a free app called “Gamera” which can help you do that with ease. It allows you to easily record replays of your favorite game moments as a video or GIF. There are two different modes offered by this app to record game replays named, Automatic and Manual. There are many games (like PUBG, etc.) which support automatic recording of game replays and also many games (like Clash of Clans) which require you to record gameplay manually. This app can record up to 15, 30, and 60 seconds of the gameplay.

Apart from recording game replay, it also allows you to edit the recordings like add filters, add music, convert to GIF, etc. There are many screen recorder apps available for Android which can help you record the activities on your phone screen. But, they are not made for recording game replays specifically. So, if you want to record only your favorite game moments, then Gamera is the best choice for you.

How to Record Game Replays of PUBG, Clash of Clans, etc. on Android:

To get started, the first thing you need to do is install “Gamera’ on your Android phone. After that, open it up and then allow permission to Gamera for the “usage access” and “display over other apps”. Then tap on the “Settings” icon and choose the video quality, video length (15, 30, and 60 seconds), and video download location. You can also allow internal audio recording and the “Desktop Suspension Ball” which is required for recording gameplay manually. As soon as you do that, you can start using this app for recording game replays on your phone. 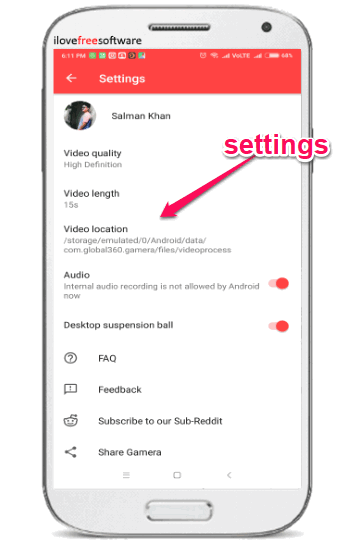 Now, to record gameplay in the “Automatic” mode, simply open any of the supported games (like PUBG) and start playing. After that, the app will automatically record the replay of all game highlights and save them. That means you don’t need to do anything and only focus on gaming.

If you want to use the “Manual” mode for recording game replays, then the first thing you need to do is make sure the “Desktop Suspension Ball” is enabled. After that, open any of the games which doesn’t support automatic recording (like Clash of Clans). When you do that, you can see a small floating “Record” button on top of the game screen which you can place anywhere you want by dragging.

Now, to record any game highlight or replay, all you gotta do is tap on the floating button while playing. As soon as you do that, it will record the gameplay which happened in the last 15 to 60 seconds. This way you can record as many replays as you want for your favorite game moments. All the recordings are saved on your phone and you can also see them on the Gamera app. 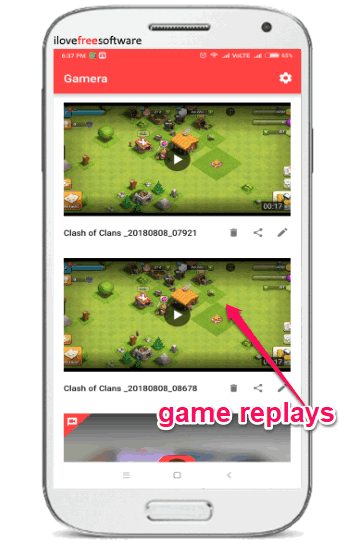 Apart from saving the game replays, this app also allows you to edit them before sharing them with others. To do that, all you gotta do is tap on the “Edit” icon associated with each gameplay video. When you do that, it will open up a new screen where you will see various video filters at the bottom which you can apply to the video. In addition to that, you will see two more options at the top named, Choose Music and Convert to GIF. 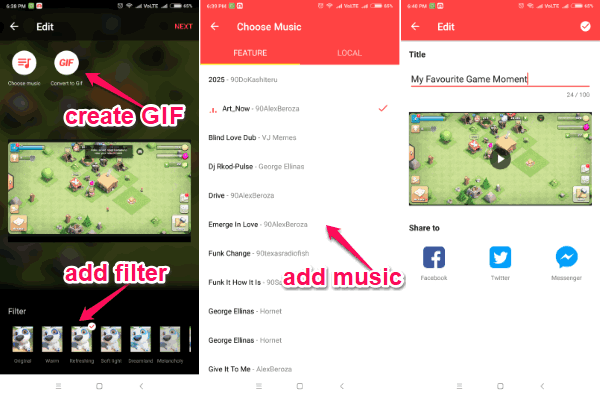 When you select the “Choose Music” option, it will open up a list of pre-defined music which you can add to the video. You can also use your own local music if you want. After adding a music, it will allow you to balance the volume of the gameplay and the music manually. Selecting the “Convert to GIF” button will instantly convert the gameplay replay into a GIF. Once you’re done editing, you can go ahead and share the game replay via Facebook, Twitter, or Messenger.

So, if you have been looking for a way to record game replays of your favorite Android games, then start using Gamera right away. It enables you to get your favorite gameplay moments saved to your phone without much effort. The main USP of this app is that it can record gameplay backward, which means you can capture everything that has happened in the last few seconds. Currently, this app is under development, so it might crash on certain Android models.

Get “Gamera” from here.