In this article, I will introduce you to 2 free Twitter video uploaders for PC. The best part is that one of the Twitter video uploaders on my list is a full-fledged Twitter desktop client with multiple accounts support and you can browse Twitter feeds, user profiles, etc.  The other software is quite straightforward and will let you post tweets and media tweets. Another exciting feature of these Twitter video uploaders is that they provide a preview option when you select a video to upload. This will help you to check if you have selected the correct video or not before uploading it. Other than that, you will also be able to post tweets with images. 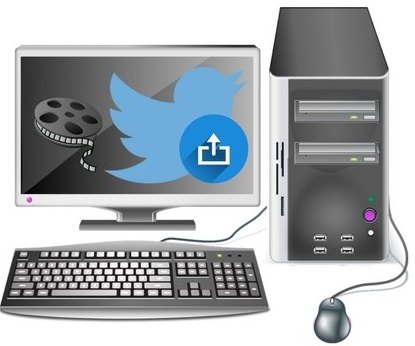 With both of these Twitter video uploader software, you can upload videos as per the Twitter Help Center guidelines. Some specifications of videos that you can upload to Twitter are: it must be between 5 secs to 30 secs (sync)/140 secs (async), size between 15 MB (sync)/512 MB (async), etc. So, in case, you are not being able to upload videos with these software then you should check out the specifications of the video that you are trying to upload. 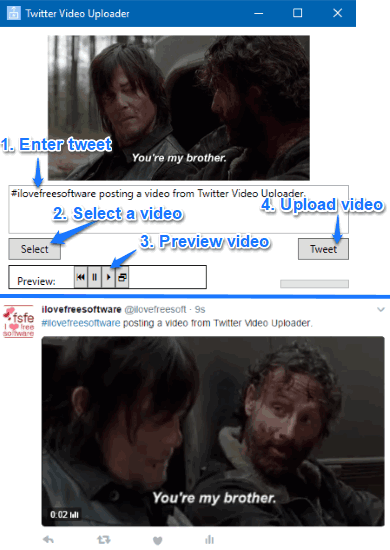 Download it from the link provided above and extract the downloaded file. After that, execute the “TwVideoUp” application file to bring forth its main interface, as you can see in the screenshot above. Now, in order to a upload video, click on the “Select” button and choose a video. Now, you can choose whether you want to add a caption to it or not. If yes, then type it in the big text area and if no then leave it blank. There is also a preview section by which you can play the preview of selected video. Click on the “Play” button then the video will be played on its interface. In the end, click on the “Tweet” button to upload the video to Twitter. Do note that it doesn’t alert you when the video is completely uploaded to the Twitter. One indication is that when the progress bar on its interface stops moving then the video is uploaded and you can check it out on your Twitter profile. 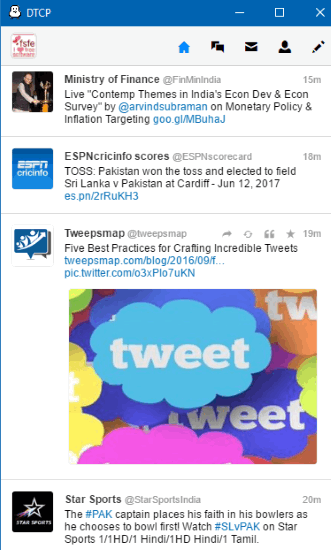 Desktop Twitter Client Project is a full-fledged Twitter client for PC that can be used as a Twitter video uploader. Just like the previous similar software on my list, you can upload a video from it. It also follows the Twitter guidelines to upload videos. So, before uploading a video make sure it satisfies all the criteria for recommended Twitter video format. The big advantage of using DTCP over the previous one is that you can also use Twitter on it i.e. browse Twitter feed, user profiles, send and receive DMs, and lots of other stuff. Another interesting feature is that it comes with multi-account supports and lets you quickly switch between them. So, it is also a pretty good alternative to TweetDeck and I will recommend you to check it out.

Download it from the link provided above and then extract the downloaded ZIP file. After that, run the “DTCP” application file. It doesn’t require any installation and you will see its interface. At first, you have to connect your Twitter account, click on the “Sign in with Twitter” button. This will open your default browser and the authorization page. Authorize “DTCP” and you will then see a PIN, copy this PIN and paste in DTCP interface to access your account.

Now, click on the “Compose” button at the top-right to open its Tweet compose window, as shown in the screenshot below. Specify a tweet message if you want to and click on “Add Media” button to select a video to upload to Twitter. After that, click on the “Tweet” button. This will close the tweet compose window and your video will appear automatically on its feed once it is uploaded. 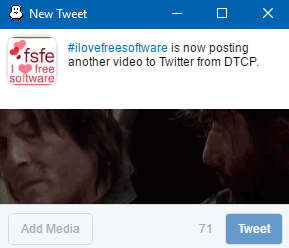 One limitation of DTCP is that it doesn’t play Twitter videos on its main interface. So, if you are browsing a Twitter timeline and if there are some videos on it, then they will appear as pictures, as shown in the screenshot below. However, a little “Video” mark is added to identify that it is a video and not a pic instead (no mark on originally uploaded videos). To play Twitter videos in DTCP, click on them and they will be played in another DTCP window.

Read the detailed review of DTCP.

In this post, I introduced you to 2 free Twitter video uploader software for Windows. With these video uploaders for Twitter, you can post video tweets from your desktop. I will recommend you to check out DTCP as it allows you to use Twitter and connect multiple accounts as well.