Face Effects is a free iPhone app which can add 3D effects to your photos. The app if you look at it the first time, or just by looking at the screenshots would seem like something extraordinary. But, after testing I found out that it is just an ordinary app with nothing much special about it. 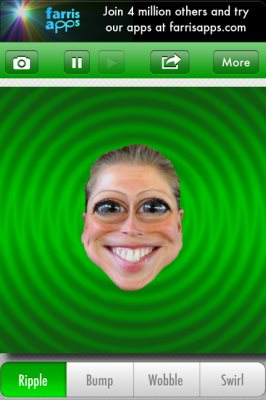 You can either test out all the four given effects on the default picture shown by the app. Or you can upload one of your pictures from the camera icon at the top left hand side of the screen. You will get two options, either to get a photo from your photo gallery or click one using your camera. 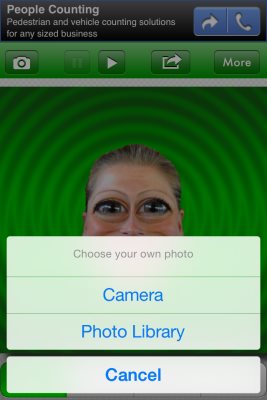 After choosing a picture, you can test out all the effects given. Like the ripple effect will create an effect like ripple effect in water, wobble would make the photo appear moving up down, etc. 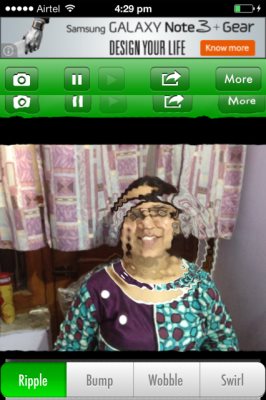 The play and pause buttons you see the top toolbar are for playing and pausing the effects. If you click on the pause button then none of the effects would work on your screen.

The next button on the toolbar with an arrow is for sharing, as seen in the screenshot below. You can share the photo you created using effects via email, Twitter or can even save it to your photo gallery. The app also gives you an option to upload the effects you created in form of a video on YouTube. As soon as you click this option the app will process your video and take your to your login page for YouTube. Once you login, the app will ask for authorization to upload the video. After that it will start the upload. This is where my testing didn’t go through. As soon as I reached this step there was an error and the app crashed. So could be a problem that needs to be fixed by the apps developers. 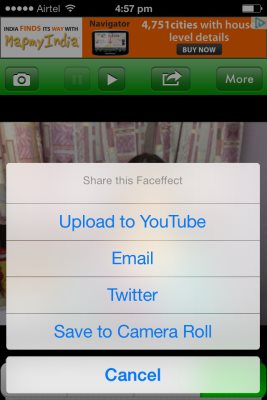 The more option you see on the top toolbar will suggest you other apps that you can download or try out.

This is all there is to the app. Just the four effects that you can try out, and the one important upload to YouTube feature that doesn’t work. I would say I have seen better apps than this one for adding 3D effects to photos. The interface though easy to use, doesn’t give a feeling that there is much to do. Just a few options to try out and that’s it. As far as sharing is concerned if the video upload worked it would have been great because there is only so much you can show through a picture. Even if you save a picture with an effect applied, there is not much you can make out. The 3D effect is only properly visible if it is video format. Saving a photo of doesn’t help much.

You can try Face Effects for iPhone free from here.