In this post, I will talk about some free Heroku alternatives. These online tools are basically PaaS platforms where you can deploy your web apps created in different programming languages such as Python, Ruby, JavaScript, and more. These Heroku alternatives support pulling the source code from GitHub and deploy for free.

Of course, there are limitations in the free version but that’s how it works in the world of PAAS. Even Heroku “free tier” wasn’t that free at all. If you are a student or solo entrepreneur then you can now transition to these platforms and ditch Heroku for good.

Salesforce acquired platform Heroku, recently announced that they will be shutting their free tier which was there for as long as I can remember. The notice is available on the website and from November 2022, there will no longer be free dynos, free PostgreSQL databases, and Redis database. Free resources will be deleted along with the inactive accounts. Apparently, they only want paying customers now.

So, if you use any of the free Heroku services, then either shift to any premium plan or to an alternative. And in this post, I will talk about 5 such alternatives to Heroku. 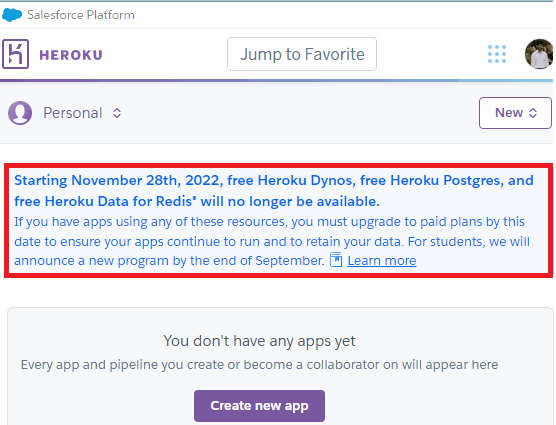 Fly.io is one the best free alternatives to Heroku that you can use. It’s designed for developers and students to run small applications for free and scale costs affordably as you grow. Just like Heroku it comes with CLI applications and there are other tools in it that you can use to easily deploy your apps. For advanced users, it has premium plans but for now, due to its free tier, you can use it in place of Heroku

Here is the complete list of programming languages that this platform supports. You can create and deploy your apps written in any of the following languages.

The free tier on Fly.io lets you spin up to the 3 smallest VMs available. The smallest VMS are of type shared CPU and 256mb of RAM. It includes up to 3GB of storage. If you create/deploy a development database using 256mb, that would use 1/3 of your 256mb VM allowance. In addition, it gives you the option to specify how big a volume you will need (1/2/3 GB size).

So, here is all you need to know about this PaaS platform and its free tier. It is pretty close to Heroku and if you are student or solo developer you will be able to deploy your apps easily. Later, you can scale depending on your requirement and usage statistics.

Northflank is another cloud-based PaaS solution that you can consider after leaving Heroku. It’s not just a platform for deploying your apps but you can use it as a CI/CD pipeline for your software projects. This is a gem of a tool for developers to build jobs & scale microservices, deploy managed databases using a powerful UI, API & CLI app.

One of the coolest things about Northflank is that it has a built-in Heroku importer. This is specifically created for users who want to migrate from Heroku. Without any hassle, you can now migrate your apps and services from Heroku and deploy some more.

Northflank has got the whole package. Even if you are moving from Heroku, you will be completely at home. It has its own CLI and deploying the app is as easy as it was in Heroku. Since it supports team collaboration you can work on some projects along with your team.

Railway is another cool alternative to Heroku that you can try. It takes an edge over Heroku because it never puts your deployed apps to sleep after inactivity. Your app stays online as long as you want it to. However, the free plan does have its limits but it is there regardless. For free, you will be able to deploy your web apps by pulling the code from GitHub directly.

Here look at the main highlights of Railway.

Every account on Railway app gets $5 credit every month. The best part is that it spends free credit first before jumping to the paid credits. The free tier offers 512 MB RAM, 1GB disk space, and community support. However, the deployment will be shut down when the free credits limit is reached.

There is a pay as you go model available if you want to scale your apps. Just sign up for the trial account (free tier) and then deploy your small apps. It is perfect for that and the best part is that it is now offering a Heroku importer. Migrating from Heroku to Railway will not be a problem. It can effectively pull the variables that you are using in your app so the whole migration process stays as fluid as possible.

Koyeb is a decent alternative to Heroku that you can consider for hosting or deploying your web apps and APIs. It has all the features of Heroku that you will need for your projects. So far, I have not encountered an importer tool for migrating Heroku deployments but I am sure doing that manually will not be that hard. Just like Heroku it offers you an intuitive web UI as well as CLI to push code to the cloud in seconds.

Koyeb supports autoscaling by design. It quickly spawns new resources as requests hit your applications. You simply need git push and it will start the build process for your app and deploy it. This is as simple as that. It is collaborative in nature and allows you to have control across your team. You can visualize team activity with the help of the activity log that it generates.

Another thing that kind of sets it stands out among other tools I have mentioned here is integrations. It seamlessly integrates with third-party apps and platforms to extend the functionality of your apps. It supports integrating with Slack, Postmark, Fauna, Datadog, Backblaze, LogDNA, Bearer.sh, and more.

You name any programming language or framework, Koyeb supports it. Just for reference, see the following list of languages and frameworks that it supports.

The free plan of Koeyb offers $5 credit every month to every account. In the free tier up to 2GB of RAM is included with 2.5 GB disk space, and you are free to deploy web apps, APIs, and worker functions. For outbound transfer, right now it is offering 100GB of bandwidth with global CDN, and load balancing.

In conclusion, I find the free plan of Koyeb more generous than other options out there. As a university student or fresher developer, you will find it very useful. However, you will need a credit card to subscribe to the free plan and take advantage of it. If later you feel the need to scale your apps or APIs then you can always switch to the pro plans which come with some other nice set of incentives. 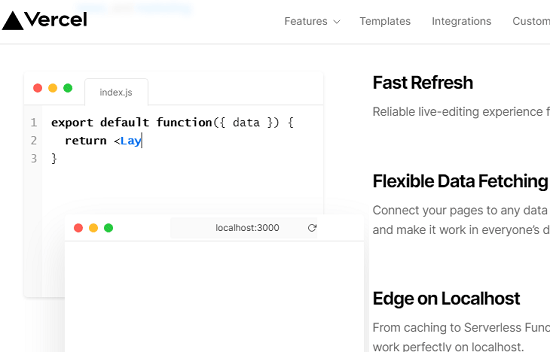 Vercel is last in my list and it is more like leys you host JavaScript based web apps and static websites. Since JS apps are in so much demand these days; you will find this platform easier to deploy your apps directly from GitHub/GitLab. It can even act as CI/CD pipeline for your projects. If you created a front end of an app then you can use it for deploying it. It lets you use custom domains in the free version and the best part is that it doesn’t ask for credit cards.

You can sign up using your GitHub account and pull an entire repo to deploy it in a few clicks. I have personally used it to deploy React based projects and it works perfectly. It automatically picks up updates in the git repositories and builds your apps again. However, the only downside is that you will not be able to deploy projects in other programming languages such as Python.

Since Vercel supports JS frameworks for now, you will only be able to deploy JavaScript based projects. Here you will be able to run a vast majority of web apps written in Node.js and other frameworks with custom environment variables. Here is a complete list of popular programming languages and frameworks supported by it.

The hobby plan of Vercel is free for personal and non-commercial use. Here you can deploy projects from CLI or personal git integrations. It offers 100 GB bandwidth along with 100 GB hours of serverless function executions. 6,000 minutes of build minutes are included with 1,000 source images optimizations. In addition, the hobby plan lets you add 50 domains per project. You can do 100 deployments in a day and HTTPS is enabled by default.

At this point, I am sure you have a good understanding of Vercel and how it works. As a student or newbie developer, you can use it to deploy and showcase your front-end projects and website themes. You can even use it to host a blog based on a static site. Just store the site data in Git repositories and use the platform to host the actually rendered website. Just like Netlify.

Even though the free tier of Heroku that was up for more than a decade is going away, I am glad that there are new players out there which will make you comfortable at their respective PaaS platforms. I have mentioned 5 such tools here and if you are a solo developer or student then you will not face any problem as some alternatives to Heroku that I mentioned here offer a built-in importer that will help you migrate all your deployed projects in a reliable way. If you know of some other free Heroku alternatives then you can always let me know in the comments down below.